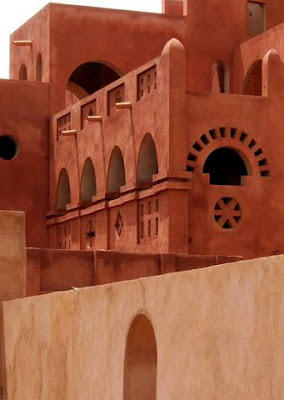 Outside of Bamako, Mali's capital city, there aren't really any hotels similar to American and European style hotels. And even in Bamako there aren't any Hiltons, Marriotts, Best Westerns, Hyatts, Sheratons... let alone Four Seasons or Ritz-Carltons. It's not that kind of a place. Outside of Bamako people camp in tents, sleep on a roof or stay in modest lodgings without regular electricity or hot water. An alternative? Paris, Rome, the Bahamas, Las Vegas...

Thanks to a fellow blogger, Sophie, a Swedish woman who runs a hotel in Djenne and blogs about the experience, I got turned on to an informal network of delightful boutique-like hotels throughout Mali. After I booked a room at Sophie's Djenne Djenno, she helped me, through a series of e-mails, plan out where to stay all over the country. All of the hotels are quite small, utterly unique, and very much geared towards serving the needs of foreign travelers. In Djenne, one of the most memorable places we visited in Mali, the Djenne Djenno, a 10 minute walk from the world's biggest and most famous mud mosque in the center of town, has a dozen rooms. We paid around $40 for what would be the equivalent of a junior suite. The hotel is beautifully decorated, beautifully run and impeccably kept up, from the beautiful gardens and wonderful common spaces to the clean, comfortable rooms (with, thankfully, mosquito nets). The restaurant is really good as well. There's no giftshop selling t-shirts or ashtrays.

Our next stop was Mopti, Mali's second biggest city (and biggest port, albeit a river port). The Kanaga, with 80 rooms, is bigger than any of the hotels we stayed at while we traveled around Mali, and is considered the "best" hotel in town. It has a swimming pool and a good location near the river (the heart of town) but otherwise... not nearly as good as La Maison Rouge, one of the most beautiful hotels I've ever seen. The hotel, which opened about a year and a half ago-- and isn't quite finished-- is the dream of visionary French architect Amédé Mulin, who has been building it for over 4 years. Because of the luxuriant public spaces the hotel looks pretty large, although there are only 12 rooms. The rooms are beautifully appointed (although mosquito nets are very much needed) in earthy Malian design. Our double cost us around $80. 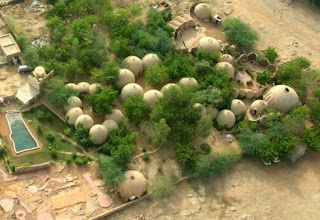 After Mopti we headed out for Dogon country and we based ourselves first in Bandiagara and then in Sangha. Neither actually has what I'd call a boutique hotel and in each case, Hotel Kambary (aka, Chevel-Blanc) in Bandiagara and Campement Sangha, we found pretty basic accommodations (with not many hours of electricity per day in Sangha). Actually the Chevel-Blanc, a series of self-contained geodesic domes, is pretty good, although there are no mosquito nets and the owner, an eccentric Swiss man named Jean Bastian, is a bit too uptight to be running a service business. Campement Sangha may be the best available to that charming and very remote town-- and it is well-run-- but... well, thank God there were mosquito nets. We paid around $70 for a double.

Timbuktu's nicest hotel is another boutique situation, La Maison, a small, well-run, beautiful little hotel in the middle of town. The clean, simple very agreeable rooms are built around a lovely courtyard with a candlelit pool. The rooftop restaurant is a pleasant common space. A double was around $80.

These hotels all have decent restaurants with fair prices and safe food and water. You tend not to spend much time in your room and the common spaces are conducive to friendly interaction with other travelers.

Posted by DownWithTyranny at 8:26 PM

Wow those certainly are different types of hotels then we people are used to seeing. it sounds very interesting how you got to stay at all those hotels and how cheap they were compared to hotels in Europe the states etc. sounds like a very good experience and you have some good tips.

This 3 Star, contemporary hotel designed with a wooden gate is centrally located in the high-end residential area of Subhash Nagar. Guests can stay in any of the 18 rooms. Private parties can be celebrated in the banquet space with the option of indoor and rooftop ambiance. Guests are served multi cuisine meals or can order meals as per their choice. A pool table is maintained for the recreation of the guests. They are also offered Wi-Fi Internet facility and facilities in the business center.