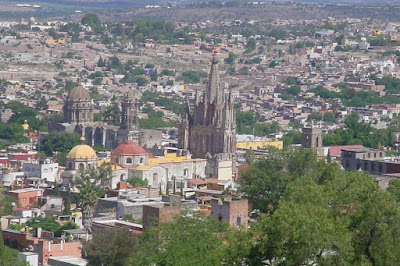 The sources said Obama may use the occasion to reverse the "Mexico City policy" reinstated in 2001 by Bush that prohibits U.S. money from funding international family planning groups that promote abortion or provide information, counseling or referrals about abortion services. It bans any organization receiving family planning funds from the U.S. Agency for International Development from offering abortions or abortion counseling.

The "Mexico City policy," commonly referred to by critics as "the global gag rule," was devised by President Ronald Reagan in 1984 at a population conference in Mexico City.

So... San Miguel de Allende here we come! San Miguel is a beautiful, artsy, historic town in central Mexico with perfect weather-- today it is 73 F and sunny-- all year round. It was designated an historic landmark seventy years ago and the colonial heritage is preserved and taken seriously. No neon signs or any of the other hideous trappings of gaudy Las Vegas style tourism that have ruined so many places in Mexico. It's all about narrow, cobblestone streets and the architecture goes back and forth from baroque to gothic. The city has a thriving and vibrant community of artists and writers from all over the world.

So this is what I did. I called Mexicana Airlines and made a reservation for a direct flight to Leon, the capital of Guanajuato and then I booked a stunning villa with 4 bedrooms. The roundtrip airfare from L.A. is $321 and the villa costs $1,550 for the week. Now I'm doing my research

on the other colonial towns in the area we might want to visit, like Guantajuato, Dolores Hidalgo and San Luis de la Paz.

A reader, Eric, sent me a great tipfor the trop: a wonderful inn he had stayed at, Posada Corazon that serves organic breakfasts, even to non-guests (with a reservation). It looks like just the kind of place I'd love.
Posted by DownWithTyranny at 3:41 PM

San Miguel is very beautiful indeed. We stayed at a charming little B&B called Posada Corazon and loved it. Don't miss the Jardin Botanico on top of the hill-- really nice to walk through....

If you’ve always dreamed of owning real estate and moving to beautiful and alluring Mexico, then San Miguel, this haven for artists and romantics alike is the locale you’ve been searching for. Real estate in San Miguel is among the most unique and beautiful in Mexico, if not the world. If you’re thinking of moving to, or retiring in San Miguel, join me for a home buyers trip this coming winter (tours also at other times during the year). For more info., visit http://www.livinginsanmiguel.com