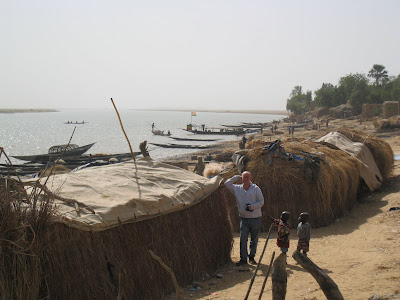 Visiting a quiet Bozo fishing village on the Niger
The alternative title for this post was A How To Guide For Seeing Mali but I thought the one I used would be more eye-grabbing. I suppose if you take all the vaccines that the tropic disease doctors insist on for a visit to Mali-- and thereby not have to worry as much about cholera, typhus, typhoid fever, polio, yellow fever, Hepatitis A and B, meningitis, and malaria (there is no way to protect yourself from Dengue Fever)-- you can eat whatever and wherever and whenever you like. I, on the other hand, only did the barest prophylactic minimum-- the yellow fever vaccine, without which you can't get a visa, and malarone pills, to possibly prevent malaria. The rest... I left to the fates and my own well-honed good instincts for prudently watching what I eat and drink.

I learned about getting sick on the road when I was much younger. In 1969 I drove a VW van across Asia to India on a two year excursion. I was a vegetarian and I quickly attributed the fact that everyone-- like I mean everyone-- around me was coming down with seriously debilitating diarrhea, to the differences in diet between myself and them. I'll spare you the unsavory details of what the Kabul Runs entails, but I can still remember the first time I realized that the slab of dead animal hanging from a hook in every (unrefrigerated) marketplace across Asia was black because it was covered in flies.

These Third World countries are poor and don't have the kinds of infrastructure we do-- even after 8 years of George Bush-- and everywhere you look there are ample opportunities to get really, really sick. Think back to Jamal's earliest flashbacks of the Mumbai slums in Slumdog Millionaire; all that poopie is not poetic license. One of my closest friends, painter Eveline Pommier, contracted cholera in India and died, full of promise and vigor and beauty, still in her 20s. Mali today is at least as bad as rural India was two or three decades ago.

That said, Mali is a gorgeous and unique country with wonderfully, warm, open, friendly people who have a culture unlike anything else you'll find anywhere on earth. It's well worth visiting. So how do you do it? It isn't a place I'd suggest just getting on a plane to, showing up in Bamako, and playing it by ear. There are no really current guide books although the best one I found, Bradt's Mali, Edition 3

, is the best out there. First written in 2000, it was somewhat updated in 2004. It was reprinted in 2007 but not changed from 2004. A lot has happened in Mali since 2004 and some of it is even hard to find on the Net. But the Net is where I turned to figure out what to do about my trip. And I struck gold on the first shot.

I found fellow blogger Sophie (aka, Toubab), a Swedish woman who runs a gem of a hotel in Djenné, the Djenne Djenno (which opened in 2006), and blogs about the experience. Sophie's blog is fascinating in and of itself but the big score for me was when I contacted her to book a room, she helped me figure out the best places to stay throughout Mali. And, best yet, she steered me towards a reputable and capable tour agent, Tounga Tours from whom we could get an essential 4WD vehicle with a dependable driver.

I had already figured out that the best hotel choice in Bamako, the capital and the city with the international airport. The Hotel Salam, a relative newcomer at the top of the market, looked like a better choice than either of the two traditional considerably older "best" hotels, Le Grand or Hotel de l'Amitie. But after Bamako I really depended on Sophie's suggestions for which were the best places to stay in each town. 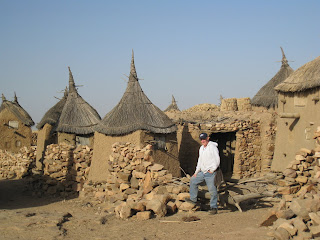 Tounga Tours is run by an unflappable husband and wife team, Van and Ann, in Bamako. Obviously they know all the ins and outs of traveling around Mali. Ann was also kind enough to book me my plane ticket from Timbuktu back to Bamako, which was lucky since it sold out. And she booked the Hotel Salam for me, saving me hundreds of dollars. When it came to the trip itself, my first instinct was to just want to rent a jeep with a driver. Ann patiently explained how we really would need a guide to get the most out of the trip, and an English-speaking one at that. I was resistant but, luckily, I gave in to her good sense. And was she ever right! Our driver and guide were a great team and a pleasure to travel around with. They find their own places to stay and their own food and the whole shebang cost 200 Euros a day, which is very much worth it if you can afford it. We were able to travel in relative comfort and visit Ségou, Djenné, Mopti, spend several days in Dogon Country (the best part of the trip) and then make the iconic road trip to Timbuktu, from which we flew back to Bamako.

We listened to Ali Farka Toure and Ry Cooder the whole time. Here are some of our pictures set to their music:

Posted by DownWithTyranny at 10:00 PM

Email ThisBlogThis!Share to TwitterShare to FacebookShare to Pinterest
Labels: Mali

So much enjoying the photos so far (and the reports, of course). I hope you will post a more extended slide show here or elsewhere.