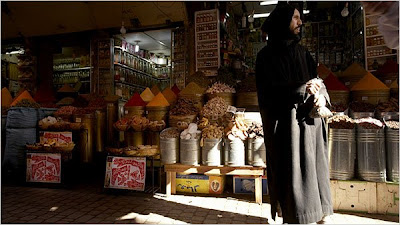 The world's new culinary capital?
Tomorrow's NY Times will publish an interactive feature called The 44 Places To Go In 2009. You can vote on each and you can order them by filters such as "luxury," "foodie," "culture," "party," "eco," etc. I've been to 23 of their recommendations, from Reykavik, Buffalo and Washington, DC to Dakar, India, Phuket and Marrakesh. They call Marrakesh, which I've visited a dozen times since 1969, "the culinary destination of the year." I like Moroccan food-- ate at Chameau on Fairfax last night and rejoiced when I stumbled upon La Rose des Sables, Bamako's only Moroccan restaurant, a few weeks ago. And in 2006 I had even posted a story here called Eating in Marrakesh. But I never thought I'd see this:

As the fascination with Moroccan cuisine has taken off-- both in the United States and around the globe-- epicures and chowhounds are flocking to the ancient ochre-hued city of Marrakech. Foreign-led food tours are sprouting. Homegrown cooking classes are multiplying. And high-end restaurants run by European hotshots are opening alongside the city's nonpareil street food and old, homestyle establishments.

Wow! Quite a leap from the communal tables of the Djemaa el Fna! But if you think that's odd, the Time's top destination for "culture" is Doha, Qatar. They contrast it with Dubai, the Las Vegas of the Middle East, and point to the just opened Museum of Islamic Art, I.M. Pei's "ziggurat-like structure of white stone... far off the art-world grid, in a corner of a globe known more for its religious fundamentalism than its embrace of cutting-edge art." Doha also has a "raft" of new contemporary art galleries in the historic souk, a cobbled together national symphony orchestra, and-- coming soon-- their own Tribeca Film Festival. All brought to you by the emir, Sheikh Hamad bin Khalifa al-Thani, and his 26-year-old daughter, Sheikha al Mayassa (the lucky purchaser of $160 million worth of Mark Rothko, Francis Bacon and Damien Hirst at a recent Sotheby's auction; we have the same taste!) Still... the #1 cultural destination in the world? Is Qatar a big Times advertiser?

Party central is Florianópolis, Brazil, and it sounds like the kind of place to avoid at all costs. Other party towns include Berlin (well... duh!), the Aegean Sea, Cuba and... Kazakhstan.

On most Friday nights in Almaty, the Uzbek-themed night spot known as the Car Wash-- an ornately decorated rooftop restaurant with enviable mountain views-- is packed with well-heeled Kazakhs smoking water pipes, drinking, dancing and eating extravagantly. Sandwiched between a residential district scheduled for rapid development and Almaty’s business district, the Car Wash is not the only center of hyperactive nocturnal activity.

Infused with newly flowing oil money, Kazakhstan’s largest city is flush with nightclubs and exotic restaurants. The city’s main boulevards are lined with English-language signs; boutiques sell everything from Armani to gem-encrusted Vertu cellphones, and cafes serve the latest in overpriced coffee concoctions.

Sacha Baron Cohen’s comic Borat character may have imprinted in the minds of many people a sense of ridiculousness about Kazakhstan, but there is little that is ridiculous about this sprawling business hub. Half a dozen luxury hotels are planned or under construction, including an ambitious JW Marriott Hotel opening next summer. The country’s flagship carrier, Air Astana, has added international flights to cities like Hanover, Germany; Dubai; and Bangkok. Wide-bodied Airbus and Boeing jets have joined its fleet.

In short, Almaty is no longer a hardship outpost for the diplomats and the oil industry executives who still dominate the city’s visitor logs.

Still... sounds like quite a stretch to call this a party destination-- even more than calling Doha a world cultural capital. Could be I'm so jaded about Kazakhstan because I just finished reading Ken Silverstein's brilliant new book, Turkmeniscam about the evils of Inside-the-Beltway lobbying, to which that monstrous and grotesque country is no stranger.

And although Kazakhstan ranks up there in this category too, the Times' top destination for luxury is Phuket, an island off the west coast of Thailand. I haven't been there since the 2004 tsunami wiped out the villa I used to rent on the beach, but the Times says Phuket is back-- and better than ever. And the top destination for the frugal traveler? Vegas, the Times apparently mixing up the concepts "frugal" and "cheap."

Since I've just returned from a brief stay in Dakar, I decided to see how my experience jibed with the Times' write-up. I liked Dakar primarily because it was an easy way to acclimate myself to Africa and get ready for the real thing: Mali. I had a great time because of the people I met there and the music scene. Dakar I found pretty nice but not amazing; Roland said it was a waste of time. The Times touts Gorée Island, which is pleasant enough but... nothing to write home about. They also point to the music scene, which I also loved, although I found it in second place behind Mali's.

They may not be Billboard chart-toppers, but Senegalese acts like the rollicking Orchestra Baobab, the soulful pop vocalist Baaba Maal and the poetic lyricist and harmonica virtuoso Ismael Lo-- to say nothing of the international star Youssou N'Dour-- have helped turn the colorful French-speaking city of Dakar into a world-music hotbed.

Their overall #1 destination for 2009? Beirut. OK. And the place on their list I'm thinking of visiting this year? Madagascar, "nature's laboratory," (at #38).

Posted by DownWithTyranny at 7:31 AM

Howie, I love your travel reports, especially this one. Keep 'em coming.

btw, I would guess that your travel experience in Dakar does not at all reflect what you would find in other more outlying regions of Senegal. Granted, not quite as "exciting" as Mali, but probably much like rural areas of The Gambia, and other neighboring countries. So, Dakar does not equal Senegal. I'm sure you've figured that out, though!