The 3 Scariest Things I Ever Did On My Travels 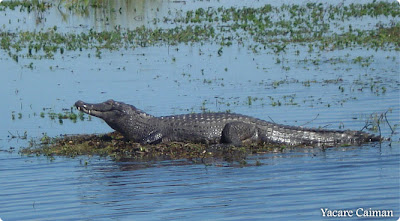 For those who think hopping on a plane for a trip to London or Paris or Mexico City is adventurous and dangerous, this post may be hard to relate to. I started hitchhiking across America when I was 13. I hitched from Brooklyn to L.A. when I was 15 and stowed away on ship so I could make a new, simpler life for myself on Tonga. I celebrated my 21st birthday in my home-- a thatch-roofed bungalow steps from the Arabian Sea in Goa. But this morning, after reading about the latest deprecation in war-torn Mali, I tried to recall what the most dangerous stunts I had pulled on my travels.

Because I was swimming when I was thinking about it-- and because I get really scared of crocodiles and alligators-- one that popped into my mind was a trip to Esteros del Iberá a swampy section of northern Argentina where Argentina, Brazil and Paraguay all come together. They call it the Serengeti of Latin America because of the abundance of wildlife and, as I noted at the time, "the most important thing was to get the idea of "swamp" out of my head. This was easy because the place is not only gorgeous, it is fresh and even cooler than everyplace around it. The water is so beautiful that if it weren't for the alligators, pirhanas, capybaras and anacondas, you'd want to jump right in-- as many of the folks who live around there do anyway (and have the missing fingers and toes to prove it)."

Alligators-- they call them Yacare Caiman in the neighborhood, like the fella in the picture-- are something I usually go out of my way to avoid. So, for me, the scariest moment came when I agreed to go with a local in a dugout canoe for an afternoon of caiman, capybara (word's biggest rodent) and anaconda watching. And for hours that's all I saw... not anacondas, just a billion alligators and giant prehistoric rats.

Years earlier I had a run-in with an even scarier creature. I was bumming around Afghanistan in 1969 and found myself captured by a militia up in the mountains. I didn't understand a word of Pashtun at the time-- I learned a few months later when I got snowed in and stranded in a tiny Pashtun village for the winter-- but I sure understood the universal motions and grunts for "put your hands over your head or I'll unload this Kalashnikov into it." So I did. Maybe they wanted to go for a Ripley's Believe It Or Not Record, but they just had us keep our hands over our heads for hours. Eventually some Australian hippie who was with me-- and peaking on acid-- just started laughing and lowered his hands. At first the Afs all started screaming menacingly and made like they were about to shoot us. Then I started laughing and lowered my hands too. And then everyone else did-- and soon we were sitting around the campfire drinking tea with the militia all laughing away and smoking opiated hash like we were all best friends.

Most recently though, Roland and I went to Mali and wound up in Timbuktu on the outskirts of the Sahara Desert. It's not really the outskirts anymore; the desert is encroaching rapidly and the streets get covered in sand all the time. One night we decided to go with Mohammed, our Tuareg guide, into the Sahara itself. It's trackless; there's nothing but sand dunes and the light is the moon and stars and our flashlights. Our destination: a Tuareg encampment a few miles away where some nomads had come down from the desert to trade. We were leaving for America in a few days and there was plenty of stuff to trade-- from my high-end REI walking sticks to cans of sardines Roland had brought... and toilet paper, airline shaving kits, bits and pieces of clothes... all kinds of stuff we didn't want to schlepp back to L.A. It went pretty well. It might not have. As I've been writing in the last few months, a Tuareg rebellion was brewing and it's boiled over... big time. They've seized two-thirds of the country. And these are bad guys; they believe slavery is condoned by their religion, for example. And in the name of their primitive and ignorant concept of Islam, they are destroying Timbuktu, ironically a centuries-old center of Islamic learning.

The attack came just four days after UNESCO agreed to a request by the West African state to place Timbuktu on its list of heritage sites in danger following the seizure of its northern two-thirds in April by separatist and Islamist rebels.

"They have already completely destroyed the mausoleum of Sidi Mahmoud (Ben Amar) and two others. They said they would continue all day and destroy all 16," local Malian journalist Yeya Tandina said by telephone of the 16 most prized resting grounds of local saints in the town.

"They are armed and have surrounded the sites with pick-up trucks. The population is just looking on helplessly," he said, adding that the Islamists were currently taking pick-axes to the mausoleum of Sidi El Mokhtar, another cherished local saint.

Roland is protesting because I didn't include the time I was stranded on a coral reef in Sri Lanka and the time we almost drove over a cliff in the High Atlas Mountains of Morocco south of Marrakech.
Posted by DownWithTyranny at 1:02 PM

Howie, I just found this and thought of you. Came here and discovered your post.