Urban Gadabout: Under Delancey Street -- a visit to the ghost of a once-crucial underground trolley transit hub 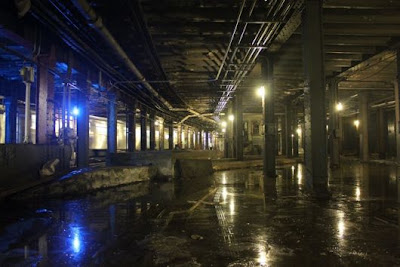 Last night, Community Board 3′s land use committee voted unanimously (with two members abstaining) to support the Delancey Underground, the high profile plan to bring a park to a 60,000 square foot abandoned trolley terminal. Project co-founders Dan Barasch and James Ramsey outlined the proposal for CB3 last fall, and received a warm reception, but no vote was taken following the initial presentation. CB3′s endorsement will become official after the full board votes later this month.
-- the start of Ed Litvak's Lower East Side News report yesterday

The trolley terminal under Delancey Street, at Essex Street, on the Manhattan side of the Williamsburg Bridge, served more than a dozen trolley lines running across the bridge to Brooklyn. The bridge opened on Dec. 13, 1903, and by the following November cross-bridge trolley service was in operation. The underground terminal is thought to have opened on May 18, 1908, according to Joseph Brennan's splendid article on the abandoned Williamsburg Bridge Railway terminal, and remained in use for decades after subway service was added to the bridge. The last of the trolley lines was discontinued in 1948, at which point the underground terminal was to all intents and purposes abandoned, as it has remained for going on 65 years, though lately talk has turned more serious as to possible reuses of the 60,000-square-foot space.

The Delancey Street approach to the Williamsburg Bridge in 1919, with kiosks at center that took trolley passengers to the terminal below, the larger kiosk at left leading to the subway station, and foreground waiting areas for terminating Manhattan trolleys
The Delancey Underground project -- conceived as a sort of underground version of the wildly popular High Line conversion of the abandoned West Side elevated train line -- is merely a proposal, albeit one that has gathered a certain amount of momentum. At the moment it isn't even a formal proposal, because the Metropolitan Transportation Authority (MTA), which among many other tri-state-area transportation-related divisions includes New York City Transti (NYCT), which operates NYC's subways and buses, has yet to ask for RFPs (Requests for Proposals) for the space, as Pedro Zevallos, associate director of real estate development in the MTA's Real Estate division, explained to us today on a New York Transit Museum visit to the abandoned Delancey Street terminal. When the MTA does ask for RFPs, he explained, and obviously the agency has every interest in finding productive use for the space, a Delancey Underground will compete with whatever other proposals are submitted. Clearly a lot of people, inside and outside the MTA, hope that the Delancey Underground proponents can assemble a persuasive proposal, in terms of feasibility and financing, but for that we'll have to wait and see. 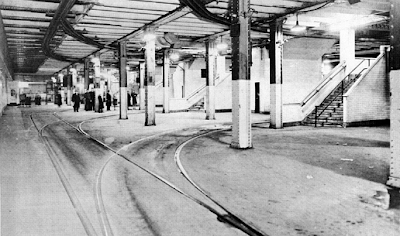 The terminal in operation, "sometime before 1935"
The one thing that I would really have liked to see today in our visit to the ghost of the subterranean trolley terminal, onetime hub of trolley traffic that carrying large numbers of commuters across the East River into Brooklyn, was the actual connection whereby all those dozen-plus trolley lines -- which came underground in eight loops for loading and unloading -- actually made their ascent onto the bridge. But of course that can't be seen because it no longer exists. When the trolley lines on the south side of the bridge (there were also trolley lines running on the north side of the bridge, but they're a whole other story) were taken out of service, those lanes were opened to vehicular traffic that accessed them via a newly built on-ramp to the bridge.

The Transit Museum members-only tour was expensive ($55) and short, with not a whole lot to see, and yet it was all worth it for the incredibly exciting opportunity to see something few New Yorkers have seen. And we had the benefit of Pedro Zevallos's expert's-eye perspective on the present and future of this ghostly space. One of my favorite categories of Transit Museum tours is the kind that bring us together with people who have held, or currently hold, positions of authority over the particular subject matter. 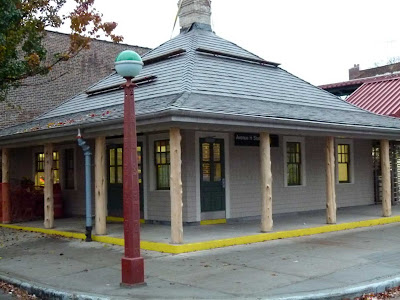 The landmarked Avenue H station house, triumphantly reconstructed
Last Sunday, for example, for a presentation on and visit to three historic stations on Brooklyn's Brighton line, we had the inestimable benefit of the participation of NYC Transit's chief architect (on the job five years now), Judith Kunoff. Did Judy ever have insight to share (and stories to tell!) about the process whereby building decisions are made in the system -- and of course the way specific projects like (but not limited to) the overhauls of the three stations we visited (Cortelyou Road, Avenue H, and Beverley Road) have been designed and executed.
For more information about current Transit Museum programs (many of them free) and tours, check the calendar.


The Transit Museum members-only tour "Trolley Ghosts: The Terminal Under Delancey" is repeated Thursday, July 12, at 5:30pm. "Look at a Landmark: The Historic Station House at Avenue H" is repeated Sunday, July 20, 2pm-4pm.
#
Posted by KenInNY at 6:37 PM