Closed To Tourists... Tibet And Timbuktu 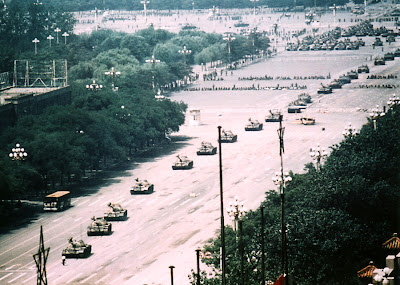 Ever see the uncropped version of this famous picture of Tiananmen Square? (click on it to enlarge)
Roland and I were just rejoicing that we had a chance to visit Timbuktu and northern Mali before the whole area-- as much as two-thirds of the country-- was captured by savage Tuareg slavers and closed up tight. Supposedly the alliance between the militant Islamists and the slavers has been cancelled but, on the other hand, flotsam and jetsam, fanatics and jihadists from all over the Muslim world are flocking to northern Mali. There's not much there. I mean, beautiful, varied Afghanistan it will never be. And now the residents-- or what's left of them-- are fighting back against the conquerors, at least in Timbuktu.

Timbuktu was incubating a proper little tourist industry when we were there a couple years ago-- I mean beyond just for tourists who were backpacking and roughing it. That's totally over now. Everyone who invested in boutique infrastructure must be bankrupt. And the Islamists are systematically destroying whatever it was-- apart from the allure of the name itself-- that has drawn people to Timbuktu for hundreds of years.

The shrine of a 15th Century sufi saint Sidi Mahmoud Ben Amar has been attacked, according to Lazare Eloundou Assomo of Unesco.

"The entrance gate of the mausoleum was completely destroyed and burnt," Mr Assomo told the BBC World Service. "The curtain that protected the shrine was destroyed."

Timbuktu is known as the city of the 333 saints, says Alida Jay Boye, author of Hidden Treasures of Timbuktu.

The fundamentalist Salafi branch of Islam objects to the veneration of saints' tombs, maintaining that it amounts to saint worship.

"Salafis do not want there to be any intermediary between the believer and God. It looks like Ansar Dine is going after shrines just like other groups have done in Egypt, Morocco and Tunisia," she says.

Neil Whitehead, a former hotelier in Timbuktu, has fled to Morocco because of the recent unrest.

He says that conditions are deteriorating in the city.

"The Salafis are turning on the locals, raiding their homes and taking anything of value, together with any food. All shops are shut and, in the words of our friends, 'everything is broken'," he said.

"They have introduced a form of Sharia and the locals feel like prisoners in their houses."

His account is confirmed by Mari Touri, a Timbuktu resident.

"There is no food in the shops, no stocks of supplies, because everything in Timbuktu comes from Bamako in the south and it cannot get through at the moment."

Another resident, Youba Ag Moha, said that the situation in the city was "calm" but that government offices were closed and there was a problem with the electricity supply.

There are also concerns for the city's wealth of manuscripts.

Exactly a year ago, Roland and I were getting ready to visit Tibet. Unfortunately, just as we were getting ready to leave, our visas were pulled and the borders were shut. We wound up staying far longer than anyone should have to in Katmandu, the overly polluted capital of Nepal. It was for one of the periodic crackdowns-- they normally last a few weeks-- that the Chinese occupiers impose on the country for a brutal crackdown they don't want to be embarrassed by in the West. But this week ABC News is reporting, ominously, that China has shut down tourism to Tibet indefinitely.

In a matter of days, the number of expected foreign visitors to Tibet has gone from millions to zero.

Chinese authorities alerted foreign travel agencies Tuesday that they would no longer be issuing entry permits to Tibet, the latest in a series of regulations being put on travelers to Tibet. The announcement follows the self-immolation of two Tibetans last week.

Tibet is no stranger to Chinese interference in its tourism industry. Tibet’s failed rebellion in March 1959 and the event’s annual memorial on National Uprising Day has chronically put the region at odds with the People’s Republic of China. In 2008, protests after National Uprising Day turned into riots that were met with violence by PRC forces. The Chinese government temporarily closed Tibet to foreign visitors. That is a now-annual practice in March, and during other national events significant to the Chinese government.

Now, many are saying that the latest in a string of Tibetan self-immolations led to the country’s shutdown to outsiders. According to Free Tibet, a campaign promoting Tibetan independence from China, there have been more than 30 self-immolations since March 2011. Most recently, on May 27, 2012 two Tibetans were the first to set themselves on fire in Lhasa, Tibet’s tightly-controlled administrative capital. The shutdown also coincides with the Saga Dawa festival, which celebrates the Buddha’s birth and draws many Buddhists to Tibet. This year, the festival began on June 4, which is also the anniversary of the Chinese government crackdown on the Tiananmen Square protests.

While many tourism agencies have learned to adapt and predict the trends on tourism bans, this closure comes as something of a shock. According to Nellie Connelly, marketing director of WildChina, a prominent travel company that regularly coordinates trips to Tibet, Chinese authorities informed the company in mid-May that travelers would only be allowed to visit Tibet in groups of five people of the same nationality. Last week, the government stopped issuing entry permits to Tibet altogether.  Connelly is in the process of rerouting customers whose Tibetan vacations are affected by the new ban. Only those Chinese nationals are allowed to enter the region.

“Tibet is a bucket-list destination for many people,” she says.

The loss of income for Tibetan communities is significant. Tibet received 21.25 million domestic and foreign tourists in between 2006 and 2010, generating $3.58 billion in income for the country. Tourism is a staple of the region’s economy. Tibet set a goal to increase tourism revenue between 2011 and 2015 to more than 20 percent of its gross domestic product.

We never made it to Damascus either.
Posted by DownWithTyranny at 8:25 AM