Urban Gadabout: Two more evening walks in Western Queens; a great ballpark and some lousy ice cream; and a date for "A Day on the J" 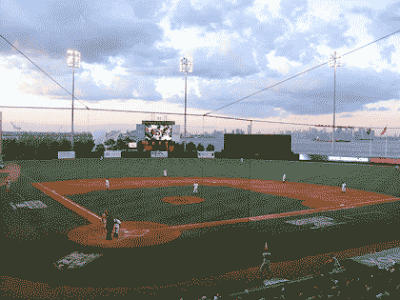 Maybe there's a ballpark somewhere that can compare with Richmond County Bank Ballpark, home of the Staten Island Yankees (of the Penn-New York League), with its vista of Lower New York Harbor, but I haven't seen it. In the distance over the right-center-field fence is the Jersey City skyline.

There's a whole lot of gadding about to get caught up on, especially coming off a five-event weekend, spread over two days with a combined temperature upwards of 200 degrees. (Of course it felt like 300.) But because we have breaking news, I'm going to reserve comment on the three Municipal Art Society tours, all in Brooklyn (separate walks in the really unrelated neighborhoods of Bedford and Stuyvesant led by Suzanne Spellen and Morgan Munsey, and Francis Morrone's saunter through Ditmas Park, one of Flatbush's three neighborhoods with a landmarked historic districts), not to mention the transit logistics that got me to all five (on time!), and limit myself to observations from each day's purely recreational final destination.

(1) Based on my first-ever Staten Island Yankees (of the "Short-Season A" Penn-New York League) home game Saturday night (against the Williamsport Woodcutters), I can report that I've never encountered either a more atmospheric walk to a ballpark than the short jaunt along Staten Island's north shore from the Staten Island Ferry Terminal to Richmond County Bank Ballpark at St. George, or a more atmospheric place to watch a ball game. My gosh, you're trying to concentrate on the game, with the up-close feeling you only get in minor-league parks, and there, beyond the fence in right-center field, amid all the other bustle out on Lower New York Harbor, is a giant container ship majestically making its way from Kill Van Kull (and the container ports in Newark Bay) toward the Verrazzano Narrows leading into the Upper Harbor and on to the open Atlantic Ocean.

(2) Wouldn't you think that an Ice Cream Takedown featuring samples of 30 flavors of ice cream would be as close as Life As We Know offers us to a slam-dunk guarantee of psychic and gustatory yumminess? At the event on Sunday at Brooklyn's Bell House, I decided that, while $18.88 was an outlandish price to pay for 30 teaspoons of crap, it wasn't an unreasonable price for the startling lesson that ice cream, even mediocre ice cream, may be the only substance on earth that guarantees a smile. I know I wouldn't have believed it if I hadn't experienced it myself. (In fairness, it wouldn't have been such a gustatory horror show if a reasonable number of the contenders -- oh yes, there was both fan and "expert" judging! -- had risen to the level of "mediocre.")

The news comes via an e-mail that Sunday Classics' esteemed "urban geographer" Jack Eichenbaum (who's also the Queens borough historian) just sent out to his e-mail list. The new information doesn't appear yet on the "Public Tour Schedule" page of Jack's website, but that's the place to sign up for the e-mail list.

Coming up tomorrow, as previously announced is the last of the three originally announced Wednesday-evening walks in Western Queens. (Jack notes: "Meeting points are 10-20 minutes from midtown Manhattan and all tours end in food-rich neighborhoods with suggestions for inexpensive dinners.") Tomorrow:'s walk is Long Island City to Old Astoria. In addition, Jack has been encouraged enough by the response to the first two walks in the series that he has scheduled a fourth for Wednesday, July 25: #7 Sunnyside to Jackson Heights (Ethnic Route).

Walk the East River shore between the Queensboro and RFK (Triboro) Bridges. Begin at Queensbridge Houses and head for the remnants of Old Astoria. The sights include increasing oblique views of Manhattan’s Upper East Side from three parks, a (former) piano factory, a huge power plant, a “big box” store, the Socrates Sculpture Park, the Isamu Noguchi Museum and ante-bellum mansions. Ends in Astoria at the Bohemian Hall Beer Garden (Czech food) with Greek and other cuisine nearby.

This tour is self-sponsored. Fee $15. Meets at the NW corner of 21 St and 41 Ave. (F Queensbridge). No reservations necessary.

This tour is self-sponsored. Fee $15. Meets under the Sunnyside arch, south side of the elevated 46 St/Bliss station (local #7). No reservations necessary.

We started with Astoria -- or more specifically, as Jack explained, "new" Astoria, not to be confused with the older part, which we'll be visiting tomorrow evening. And then, on a punishingly hot July evening, came one of the really great walking tours I've ever done, one that targeted three neighborhoods -- Sunnyside, Woodside, and Jackson Heights -- that are adjacent but developed in almost entirely different ways for reasons that start with basic geography, Sunnyside being almost entirely lowland, meaning originally marshland unsuitable for real-estate development; Woodside being a mix of some higher ground and lowland, and Jackson Heights being mostly the high ground coveted by developers to house the rich. Once sewers were installed even the lowlands became developable (though a hefty chunk of Sunnyside had already been given over for a prime lowland use: railroads, specifically the yards and western end of the Long Island Rail Road).

There has been fascinating, historically important, innovative residential development in all three neighborhoods, and Jack showed us and explained lots of that. But more important, with his choice of sites and the sort of "back-door" route he charted, he "gave" us three wildly different contiguous neighborhoods, not only enabling us to get a feeling for the basic character of each but allowing us to actually experience the basic rise in elevation as we advanced toward Jackson Heights. This is Jack at his best, which is seriously special.

I've made a big deal here of Jack's day-long World of the #7 Train tour, which I did in spring 2011 and was powerfully tempted to do again in the spring 2012 edition. I can't find a link, but I could swear I'd already mentioned that Jack was talking about scheduling another subway-line tour he has done in the past, along the J train, which follows "the colonial route beteween Brooklyn and Queens." In any case, Jack has now made it official: A Day on the J, which he reports he hasn't done in eight years, is scheduled for October 21! Jack will e-mail you a great information sheet on request; it includes a registration coupon, but you can register without it by mailing him the information specified in the description below -- along with your check, of course

Like The World of the #7 Train, A Day on the J is organized in the form of six walks in dramatically different areas, reflecting widly different geography and development histories, spanning the three boroughs through whichf the J runs: Highland Park, Richmond Hill, and downtown Jamaica in Queens; Bushwick and South Williamsburg in Brooklyn; and the Lower East Side in Manhattan. The walks are linked, of course, by rides on the J train itself (unlimited-ride Metrocard highly recommended). As with the #7 tour, A Day on the J has a lunch break built in, in this case in Jamaica.

I think it's safe to say that, except to people who live or work along the J route, this train is a lot less familiar to most New Yorkers (and visitors) than the #7 train cutting through Queens to Flushing. 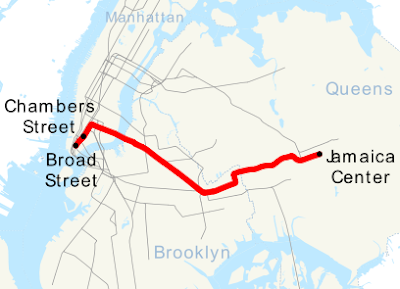 Take the J Train: Jack Eichenbaum's Oct. 21 Day on the J will feature walks in Queens (Highland Park, Richmond Hill, and downtown Jamaica), Brooklyn (Bushwick and South Williamsburg), and Manhattan (Lower East Side), plus lunch in Jamaica and of course lots of trips on the J.
#
Posted by KenInNY at 6:00 PM