Urban Gadabout: Jack Eichenbaum in the Bronx and Queens; scenic Dutch Kills; Hidden Harbor on land as well as sea 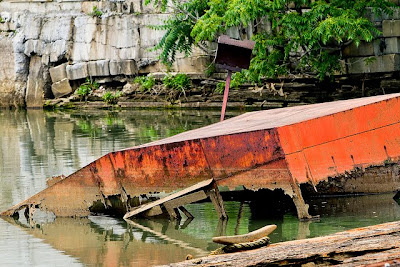 There's a lot of news to cover, but some of the events I promised to tell you about as a continuation of Sunday's Urban Gadabout post, "Jamaica Bay, here I come!," in which I reported on the upcoming Jamaica Bay Ecology Cruise setting sail from Brooklyn's Sheepshead Bay at 3pm on Sunday, June 24 (information here; buy tickets online here), are coming up right soon.

As I mentioned, I'll be making my way to Sheepshead Bay from the last of Jack Eichenbaum's Municipal Art Society series of three walks in the part of the Bronx crudely known as the South Bronx. Following March's walk through Mott Haven and last week's walk through Melrose (perhaps best known as Fort Apache country -- though almost unrecognizably changed since then), next up is Morrisania.

Let Jack Eichenbaum, Urban Geographer, show you the Bronx in a new way. Dealing with similar challenges of urban disinvestment and blight, the neighborhoods of Mott Haven, Melrose, and Morrisania were often referred to dismissively as simply "the South Bronx." In recent decades, planning and new buildings have begun to restore their livability. This walking tours stresses renewal in response to basic urban geography. Please be prepared to walk two miles and at a brisk pace. Cost: $20 / $15 Members.
Notes:
Please purchase tickets online or call (212) 935-2075, Monday-Friday, 9am-5pm.
Meeting locations are provided after tickets are purchased.

Meanwhile, tomorrow evening Jack is launching another summer series of Wednesday-evening walking tours in his native Queens (of which, you'll recall, he is the official borough historian).

This demographically changing neighborhood is opposite Manhattan‘s Upper East Side. Italians and Greeks are being replaced by Arabs, Bosnians, Brazilians, Mexicans, and yuppies. We’ll explore Astoria from its important transportation arteries: Steinway St (a former trolley route), 31 St (under the elevated train), the Grand Central Parkway which bisected the neighborhood 70 years ago, and 30th Avenue, its café-lined promenade.

Fee $15. Meets at the SW corner of Steinway St. and Broadway (M, R Steinway St.) No reservations necessary. Ends near many good restaurants.

Fee $15. Meets under the Sunnyside arch, south side of the elevated 46 St/Bliss station (local #7) No reservations necessary. Ends near many good restaurants.

Walk the East River shore between the Queensboro and RFK (Triboro) Bridges. Begin at Queensbridge House and head for the remnants of Old Astoria. The sights include increasing oblique views of Manhattan’s Upper East Side from three parks, a (former) piano factory, a huge power plant, a “big box” store, the Socrates Sculpture Park, the Isamu Noguchi Museum and ante-bellum mansions. Ends in Astoria at the Bohemian Hall Beer Garden (Czech food) with Greek and other cuisine nearby.

AN "INTENSE EXPLORATION" OF DUTCH KILLS

Some readers may recall that it was with Jack that I finally got the first exposure I craved to Newtown Creek, the waterway-turned-Superfund site that forms the East River end of the border between Brooklyn and Queens, actually walking across the Pulaski Bridge. Since then I've cruised the scenic creek, thanks to the invaluable Newtown Creek Alliance, which has a walking tour coming up this weekend for which I dropped everything else: "an intense exploration of Newtown Creek’s Dutch Kills tributary — found less than one mile from the East River," with NCA historian Mitch Waxman.

Join Newtown Creek Alliance Historian Mitch Waxman for an intense exploration of Newtown Creek’s Dutch Kills tributary -- found less than one mile from the East River. Dutch Kills is home to four movable (and one fixed span) bridges, including one of only two retractile bridges remaining in New York City. Dutch Kills is considered to be the central artery of industrial Long Island City and is ringed with enormous factory buildings, titan rail yards — it’s where the industrial revolution actually happened. Bring your camera, as the tour will be revealing an incredible landscape along this section of the troubled Newtown Creek Watershed.

Also coming up from NCA is a free (though reservations are required) "Newtown Creek Birdwatching Excursion" the morning of Sunday, June 24, when I will, alas, be occupied with my Bronx-to-Sheepshead Bay-to-Jamaica Bay loop.

HIDDEN HARBOR TOURS: NOW ON LAND AS WELL AS SEA

I wrote last summer about the fascinating Hidden Harbor tours jointly promoted by the Working Harbor Committee and Circle Line Downtown. (Information about this summer's schedule of the three tours -- to Newark Bay; along the Brooklyn shore; and along the Hudson shores of Manhattan and New Jersey -- is here.)

This year there are Hidden Harbor walking tours as well, beginning this Saturday with the first of three dates for a tour of Lower Manhattan, led by Working Harbor Committee member Captain Margaret (Maggie) Flanagan.

Now you can explore the working waterfront by land on our NEW Hidden Harbor Walking Tours.

Tour hidden or overlooked places and experience the working harbor’s rich history and its fascinating role today. The walking tours are 2-hours long and like our boat tours, are narrated by maritime experts, historians, and other titans of the working waterfront.

Join us on the walk around the tip of Manhattan from the mouth of the Hudson River to the South Street Seaport Museum on the East River, where New York’s port began and maritime piers in action today.

The tour starts with sweeping views out over the harbor from the public roof deck at Robert Wagner, Jr. Park and includes historic Pier A and Battery Park to the US Custom House, Broad Street (the Gentleman’s Canal in Dutch times) and the historic shoreline along Pearl Street.

Landmarks along the way include Fraunces Tavern, handsome India House, and along the East River, the newly opened waterfront esplanade.

MEET UP: Meet at the brick archway/entrance to Robert Wagner, Jr. Park at 20 Battery Place across from the Ritz Carlton Hotel at 1pm. Ends at the South Street Seaport Museum at 3pm.

The other Hidden Harbor walking tour being offered is of the northern coast of Staten Island from the ferry terminal to Snug Harbor, led by none other than Mitch Waxman!

Join WHC’s Mitch Waxman for an intense exploration of the Staten Island coastline of the Kill Van Kull, the busy waterway connecting Port Elizabeth-Newark with the lower harbor. Expect tugboats, special guests and a few surprises as we walk the two miles from the Staten Island Ferry terminal at St. George to Sailors Snug Harbor, home of the Noble Maritime Collection, featuring works of maritime artist John A. Noble.

MEET UP: Meet at the St. George Ferry Terminal in Staten Island, walk to the outside plaza at the north end exit (toward the baseball stadium, plaza above/over the cab stand), at 11am. Ends at Snug Harbor Cultural Center & Botanical Garden, Nobel Maritime collection at 1pm.