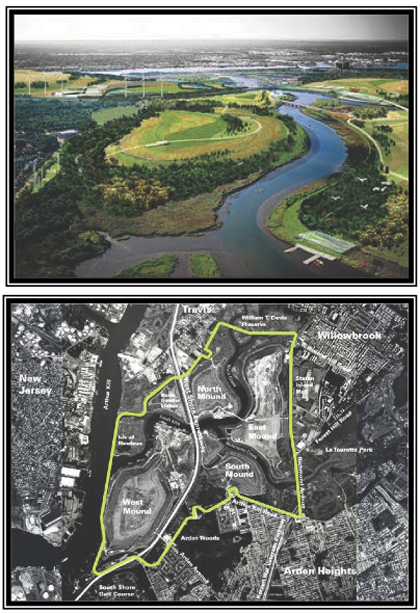 The previously scheduled visit to Staten Island's in-development Freshkills Park had to be postponed because of Superstorm Sandy damage. The tour has been rescheduled for November 9.

A couple of days ago I promised an update on the fall tour schedule of the Wolfe Walkers, now programmed by the peerless tour guide Justin Ferate. The brochure is available online now, with this introduction:

This Fall, we have an exciting selection of touring options. Our first tour of the season will view and explore a diversity of important and well-loved 57th Street landmark buildings and will also include brief tours of several art galleries. Our Autumn bus trip will take us up to Hartford, Connecticut. Here, we’ll take a private boat tour along the Connecticut River on the romantic old- time excursion boat, the Hartford Belle. (Reserved just for the Wolfe Walkers!) We’ll lunch at the highly acclaimed Italian restaurant Salute and end our visit to Hartford with a guided tour of the beloved Harriet Beecher Stowe House. To celebrate the Fall season, our intrepid bicyclist Jacqueline Goossens will be leading a special bicycle trip to Upper Manhattan and then will travel along the Hudson River toward Columbus Circle. We are also offering an often-requested walking tour of the “Mile Square City” of Hoboken, New Jersey. An unusual and special new tour will discover the multi-layered histories of Nutley, New Jersey – strolling the treasured waterfront greenbelt of Memorial Parkway (including a number of 18th and 19th century historic structures) with the Nutley Museum Director, John Simko. Speaking of greenbelts, we’ve also rescheduled the bus trip to Freshkills Park in Staten Island. Spaces are limited, so be certain to register right away! Finally, at our annual Holiday Brunch, Justin will present a lecture celebrating The Centennial of Grand Central Terminal. There are lots of options. We look forward to seeing you all!
The Wolfe Walker Committee

Here are abbreviated descriptions of the tours.


57th Street has long been a treasure trove of artistic, musical, and cultural delights. Join noted Tour Leader Justin Ferate as we discover the history, legends, and lore of this fascinating thoroughfare. Among the various sites will be Trump Tower, Tiffany’s, the Fuller Building, the Solow Building, Carnegie Hall, Steinway Hall, the Art Students’ League, and a selection of art galleries. Rediscover old friends, discover remnants of the street’s residential past, and view high-end new buildings. Tour will include several special interior visits.


Delight in the brilliant colors of autumn as we travel by motor coach through the leafy landscapes of Connecticut en route to the capital, Hartford. We’ll begin our visit with a private guided boat cruise up the Connecticut River on the intimate riverboat Hartford Belle. beautiful intimate riverboat reminiscent of simpler times. She has a mahogany-trimmed enclosed cabin. Our ever-gregarious Captain Brad Fenn likes to keep the windows open on sunny days to capture the autumn breezes. There is ample seating or some may want to stand on the bow to get the best views along the majestic Connecticut River! After lunch at the Italian restaurant Salute, a stone’s throw from Hartford’s centrally located Bushnell Park, we will travel to the Harriet Beecher Stowe House – an historic house and National Historic Landmark in an artistic neighborhood known as Nook Farm -- which was the home of Harriet Beecher Stowe, author of Uncle Tom's Cabin, for her last 23 years. We will take a special guided tour of the home.

Limited to 40 participants. Advance reservation only, $135 (no on-site registrations)


Join the Wolfe Walkers and the enthusiastic leader Jacqueline Goossens for our free autumn bicycle tour. This tour is conceived for those who want to take a leisurely ride to experience the varied New York environments through which we’ll travel. Meeting at Columbus Circle, we will ride along Central Park West to 110th Street. Continuing north along Frederick Douglas Boulevard, we’ll travel west to the Hudson River bike path. We’ll stop at Fairway Market to purchase lunch, which we can eat in Riverside Park. After lunch, we’ll ride south along the Hudson River, Riverside Drive, and south toward the Hudson River Boat Basin at 79th Street. The tour will end at 57th Street – near Columbus Circle.


A century ago a magazine editor living in what is now known as Nutley, New Jersey urged his friend Samuel L. Clemens (Mark Twain) to pay him a visit. ''There isn't much that is prettier than this end of New Jersey,'' he wrote. ''It is all upland, tumbling into shallow valleys and bright sunny reaches along the Passaic River, and hillsides white as snow with daisies, and everywhere trees.''
Today, the Empire State Building is clearly visible from some of Nutley's highest points, but the pastoral serenity is preserved in the township's 100-acre park system that is sprinkled throughout this suburban community – a park system that is considered to be the “crown jewel” of all Essex County. We’ll walk about a mile, with many stops along the way. A list of possible luncheon destinations will be distributed on the tour. Celebrate Nutley history with a walking tour led by John Simko, the Nutley Museum Director.

Discover the Creation of Freshkills Park
Ferry & Bus Tour with Justin Ferate
Saturday, November 9, 2013, 9:15am to about 12:30pm (Manhattan to Manhattan)


Join Justin at Manhattan’s Staten Island Ferry Terminal to begin this discovery tour of the new Freshkills Park! In Staten Island, we’ll meet a special bus and a member of the New York City Parks Department who will take us on this very unusual adventure. At 2,200 acres, Freshkills Park will be almost three times the size of Central Park and the largest park developed in New York City in over 100 years. James Corner of Field Operations, the same firm that created the stunning landscape designs for the High Line, produced the master plan to guide the long-term development of Freshkills Park.

All tour participants will be required to sign a Department of Sanitation liability waiver. $20 in advance (no on-site registrations)


Share an end-of-the-year meal with other Wolfe Walkers at our long-time holiday venue, Pete’s Tavern. See the table where O. Henry wrote his beloved Christmas classic, “The Gift of the Magi.”

In 1903 – a little over 100 years ago – the New York Central Railroad was legally obliged to either “Electrify or Leave Town!” In response, the train company made an impressive and nearly inconceivable decision. Blasting an immense trench down the center of stony island of Manhattan -- from 42nd Street to 97th Street -- the railroad placed their newly electrified trains underground. Above the railroad tracks, the railroad then created an elegant, luxurious new thoroughfare named PARK AVENUE -- transforming one of the ugliest places on the planet Earth into one of the most world’s desirable residential addresses, which still remains exceptionally chic 100 years later. The centerpiece of this great “makeover” was Grand Central Terminal, which celebrates its 100th anniversary this year! Justin Ferate shares a photographic history of the creation of Grand Central Terminal, Park Avenue, and the invention of Midtown Manhattan!

Brunch features an array of selections from which to choose, and includes one drink. Limited to 38 people. $25 in advance, $30 on-site if space permits

Registration is by mail only, and since it's handled entirely by volunteer labor, you don't get an acknowledgment. If you're unsure about whether you're registered, you can always call Mickie Watterson to check. Warning: The big events like the bus trip and boat ride to Hartford always book up, and usually pretty quickly, so if I were you, I wouldn't delay. Also, I did the Holiday Brunch at Pete's Tavern for the first time last year and had a swell time; people tend to remember about it as the day approaches, so again, it's wise to book ahead. -- Ken