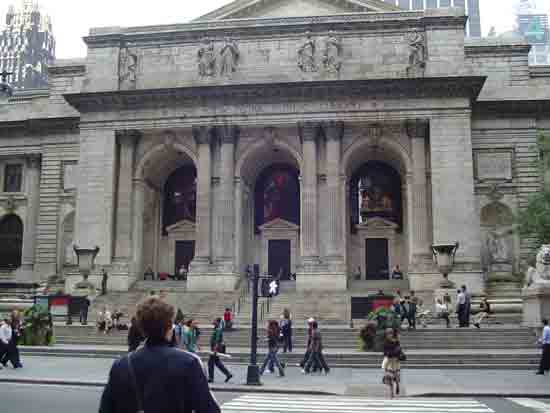 It was a big commitment last weekend, especially for someone still recovering/rehabbing from knee-replacement surgery, but I couldn't resist signing up for Municipal Art Society walking tours with four of my favorite tour leaders -- on Saturday, Matt Postal ("Upstairs Downstairs" in Manhattan's East 60s) and Jack Eichenbaum ("From Forest Hills to Corona" in Queens); on Sunday, Joe Svehlak (the half-mile expanse of Nassau Street in downtown Manhattan) and Francis Morrone (three very different urban landscapes in Brooklyn -- the Robert Moses-era Metro-Tech, the c1990 Metro-Tech campus, and still-in-progress Brooklyn Bridge Park).

It was especially good to see Jack back in action, since he'd had to cancel a couple of tours this summer after banging up his knee. And the Forest Hills-to-Corona walk amply demonstrated his emphases as an "urban geographer" -- the way contrasting geography influences development. As I've mentioned a number of times, when Jack asks you on a tour which direction we're walking in, he usually doesn't want to know from north or south, east or west; he wants us to be aware of up and down. ("Up" tends to be the good dry land where rich people gravitate; "down" tends to be marshy or mucky land that floods easily and is much tougher to develop.)

Tomorrow I'm doing another tour with Jack, for the Municipal Art Society, which is really a two-in-one, focusing on the Midtown Manhattan corridor of East 42nd Street. The year 2013 has been a blockbuster year for Grand Central Terminal, because February marked the centenary of its opening, and that opening gave a huge impetus to the development of the neighborhood. But already in the neighborhood, a couple of blocks to the west, was one of New York's greatest building, the New York Public LIbrary, begun in 1902 and finally opened in 1911. Here's how Jack describes the tour:


Maps, Realities and the People’s Palace
Saturday, September 14, 11am-1pm
Marking the centennial of Grand Central Terminal, we’ll tour the (external) GCT and Bryant Park vicinities, planned areas greatly altered since before the Civil War. Then we will see how historical cartography captures the changing urban landscape in the splendidly restored Lionel Pincus and Princess Firyal Map Division of the New York Public Library.

Jack does tours under various auspices, including his own, which is why it's important to sign up for his e-mail list, which you can do on the "Public Tour Page" of his website, "The Geograhy of New York City with Jack Eichenbaum," for advance notification of what he has in the works. Coming up is one of his Queens specialties. (Remember, Jack is Queens' official borough historian.)


What’s New in Long Island City?
Sunday, October 6, 4-6:30pm
We’ll walk from Queens Plaza to the East River waterfront. Rezoning and demographic change stemming from Manhattan spillover spark revitalization in this once stagnant industrial neighborhood. A lively arts community and restaurant scene has developed. The Plaza, where transit lines intersect, has been rezoned for hotels, condos and offices. Gantry Park, on the East River, is the perfect place to view the midtown Manhattan skyline at sunset. After the tour, enjoy restaurants and LICAO events which abound in the nearby Vernon/Jackson area. >This tour is self-sponsored with the support of Community Board 2 and the Long Island City Partnership. Meet at the fare booth on the lowest level of the Queensboro Plaza station (N,Q,7) Fee $15

For MAS Jack has two more of his Queens specialties coming up:


Flushing’s Koreatown
Saturday, October 19 11am-1pm
Koreans are the premiere small businessmen and church builders of contemporary immigration. Their center of gravity has migrated away from Central Flushing and is now sprawling east along Northern Blvd and to “Korean Villages” at LIRR stations. See surprising shops, supermarkets and unusual houses of worship. Eats include “BBQ“ and “KFC ” (Korean versions!) Be prepared to walk briskly.

Astoria
Saturday
November 23 11am-1pm
This demographically changing neighborhood is opposite Manhattan‘s Upper East Side. Italians and Greeks are being replaced by Arabs, Bosnians, Brazilians, Mexicans, and yuppies. We’ll explore Astoria from its important transportation arteries: Steinway St (a former trolley route), 31 St (under the elevated train), the Grand Central Parkway which bisected the neighborhood 70 years ago, and 30th Avenue, its café-lined promenade. Be prepared to walk briskly.

One of the things Jack is best known for is his daylong series of mini-walking tours organized around a single subway line -- most frequently "The World of the No. 7," the Flushing line, but more recently "A Day on the J," which runs from the Lower East Side through Brooklyn's Williamsburg and Bushwick and on into Queens. This summer Jack announced a tour built around my (and Howie's) old Brooklyn subway line, the Brighton line, now designated the Q train. (The line's original destination as a regular railroad was Brighton Beach, but it was eventually extended on to Coney Island.)

The tour was originally scheduled for July, but Jack banged up his knee and had to postpone it. Now it's scheduled for September 29, when it should be cooler, and also more people will have an opportunity to sign up.


Brighton Line Memoirs meandering off the Q train
Saturday, September 28, 10am-5:30pm
This is a series of five walks and connecting rides along what was once the Brooklyn, Flatbush and Coney Island RR dating to 1878. Walks take place in Prospect Park, Brighton Beach, along Avenue U, in Ditmas Park and Central Flatbush. Lunch is in Brighton Beach where you can picnic on the Boardwalk. Tour fee is $39 and you need to preregister by check to Jack Eichenbaum, 36-20 Bowne St. #6C, Flushing, NY 11354 (include name, phone and email address) Get the full day’s program and other info by email jaconet@aol.com. The tour is limited to 25 people. Don’t get left out!

The last I heard from Jack, on the "Forest Hills to Corona" walk, there was still a fair amount of space in the Q train tour, but the way it often works is that there's a flurry of registrations as the date closes in, and people wind up getting closed out. You don't want that to happen to you, do you?

Justin, who for some time now has programmed and led most of the Wolfe Walkers tours (originated by Gerard Wolfe way back when), hasn't mentioned it as far as I've noticed among the vast quantity of tour news items he passes along to his mailing list, "Tours of the City with Justin Ferate," but the fall Wolfe Walkers schedule is in fact up. I've gotten my registrations in the mail. We should talk about them soon.