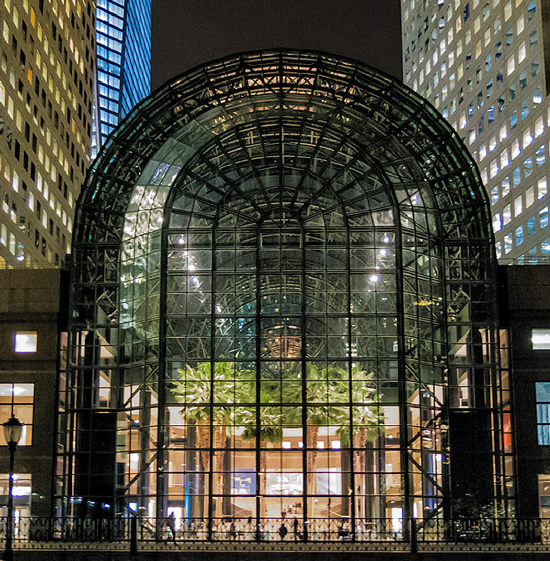 The Winter Garden, the breathtaking public atrium in the World Financial Center, is one of New York City's most beautiful interior spaces.

[NOTE: This post was written to be posted on August 21, but I don't seem to have actually posted it. The time frame has changed a bit, but otherwise it seems to me still worth looking at -- especially the pictures.]

Amid the devastation of 9/11, the fate of the Winter Garden, the majestic and much-loved 10-story atrium of the Cesar Pelli-designed World Financial Center, adjacent to the World Trade Center, may not have been uppermost in many people's minds, but in fact it was pretty much totaled. 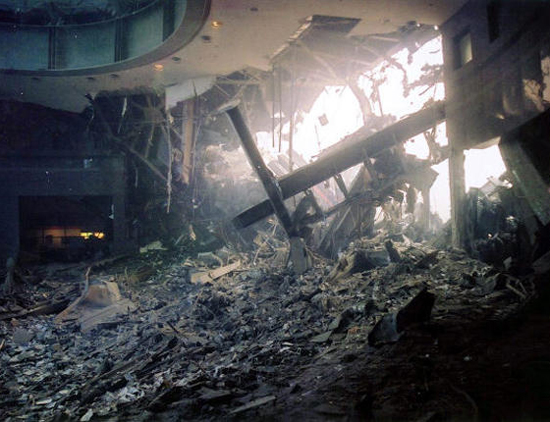 The relatively quick and genuinely masterful rebuilding of the Winter Garden correspondingly became one of the city's most heartening symbols of revival. And the center's proprietors have continued to maintain the space rigorously and lovingly -- right up to Superstorm Sandy, when the space took another hit. By then, though, the complex's owners, Brookfield Properties, were preparing to announce a substantial renovation that would mark the WFC's conversion into "Brookfield Place" (not exactly a "Eureka"-style naming inspiration; Brookfield already had Brookfield Places in its home city of Toronto and in Perth, Australia), in hopes of drawing non-financial tenants to the considerable space the company has to market.

Meanwhile, the Winter Garden is for once undergoing some transformation that is both (a) planned and (b) owing to natural causes. The grid of 16 palm trees which has been probably the atrium's most conspicuous feature is in the process of being replaced. It seems that the old trees, which in fact were new trees when they were planted in the 2002 rebuilding of the Winter Garden, had grown to 60 feet, too large to allow for further growth in the space.

So last week the old trees were chopped down, to be converted to mulch for use in gardens at local hospitals "to honor their role in the Winter Garden that made it both a place to meet and a place to rest," according to a Brookfield statement, and this week 16 new trees, about 35 feet tall, have been planted to take their place. DNAinfo.com's Julie Shapiro reports that the new occupants "will all be Washingtonia robusta trees, the same type as the previous trees," according to Brookfield. 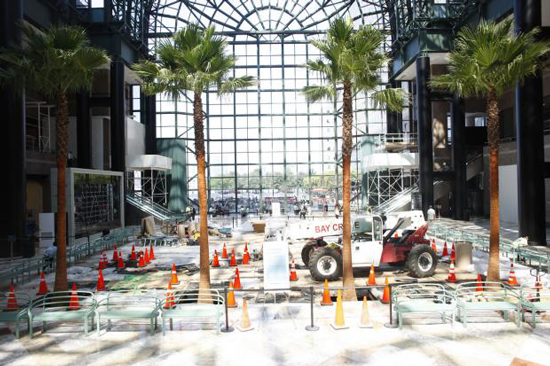 Long life to the young(er) trees -- or at least as long as their new habitat allows.