No More Drugs For Tourists In Holland? 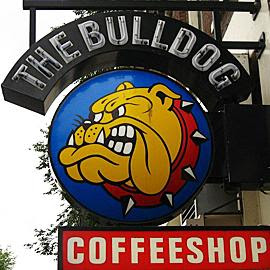 I never got into the 12-step thing. I was severely addicted to drugs a couple times while I was a teenager and I went for the one step thing: stop. It wasn't easy and there was some spiritual intervention that was helpful but it worked, eventually. By the time I was 21, the drug demon was over... and I moved to Amsterdam. I lived there for almost 4 years and even worked in a licensed hash distribution center-- the Kosmos, which was actually a meditation center-- but never participated in the free and easy drug life. But it was certainly all around me, all the time. In fact, I didn't know that many people who weren't smoking hash. That's all changing now... at least for foreigners. Pressured by E.U. conservatives, the right-wingers who won the last Dutch elections passed a law preventing foreign tourists from using drugs... and this week a judge upheld it. That reversed 36 years of a very easy-going policy towards soft drugs in the country.

While soft drugs are tolerated, there is growing concern at tourists visiting just for drugs, and foreign dealers selling illegally at home.

The ban is due to start in three southern provinces next month, and go nationwide by the end of the year.

A group of cafe owners argued at The Hague district court that the ban was discriminatory against foreigners.

Under the new law, Dutch residents will still be allowed into the cafes, as long as they have valid identification, or possibly hold a new "weed pass," which is also being debated.

There are about 700 coffee shops, as they are called, in the Netherlands. The cultivation and sale of soft drugs through them is decriminalised, although not legal; police generally tolerate possession of up to five grams of cannabis.

A lawyer for the coffee shop owners said he would immediately lodge an appeal.

Michael Veling, a spokesman for the Dutch Cannabis Retailers Association, is among those challenging the government plan.

"It is going to cost me 90% of my turnover," he told the BBC World Service. "That is a very good reason for anyone to oppose any plan. Second it puts our customers in a very difficult spot, because why do you have to register to buy a substance that is still illegal?"

The BBC's Anna Holligan in The Hague says the nationwide ban is being strongly opposed by the Mayor of Amsterdam, Eberhard van der Laan, because around a third of the city's tourists visit to smoke cannabis in the cafes.

If the coffee shop owners lose their case they say they will take it to the European Court of Human Rights, on the grounds that the Dutch should not be allowed to discriminate against people on the basis of where they live.

The moves are part of a tougher approach to drugs introduced by the coalition conservative-led government, elected 18 months ago.

In October strong cannabis was reclassified as a hard drug, amid concerns that it has a psychotic effect on some users.

The move forced cannabis coffee shops to remove the more popular stronger varieties from their shelves.

In November the city of Maastricht brought in a coffee shop ban for foreign tourists from all countries, except Belgium and Germany, from where the majority of foreign customers come.

Now I guess there's going to be a big black market springing up for the wietpas or weed pass that permits coffee shops to sell drugs. Or will a big portion of the tourist trade dry up starting January first when the ban goes into effect? When I was there in the early '70s, there were always kids from England, Germany, Italy, Spain, France, Japan visiting Amsterdam and I had the feeling it wasn't just to see the Rembrandt pictures. Funny thing is, the only social problems I ever saw related to intoxication in Holland was from drunks, not from people smoking weed. The pilot program launched on October 1 in Maastricht confined cannabis sales to Dutch, German and Belgian customers. This reportedly led to the loss of over 345 jobs and will cost the city approximately $41 million dollars per year in pot tourism. But, on the other hand... I had a perfectly delightful 4 years there-- without drugs.
Posted by DownWithTyranny at 7:15 PM