Urban Gadabout: Think you know what delimits Manhattan's Upper East Side and Harlem? Jack Eichenbaum can set you straight 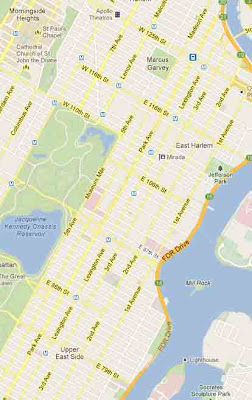 Properly speaking, as I learned from Jack Eichenbaum, the "Upper East Side" is (or at least historically was) the high ground alongside Central Park -- the two blocks between Fifth and Park Avenues, "upper" meaning, well, upper, not "northern," as most of us assume. If you were to draw a diagonal line from the mid 70s at the East River up through the northeastern corner of the park and on beyond Morningside Heights to the north, you would have the stark dropoff from the rock-underpinned main body of Manhattan to the relatively swamplike valley where the Dutch established their agricultural town of Nieuw Haarlem.

What you've got in the above caption is some of what I learned, or think I learned, from one of my most eye-opening walking tours ever, a recent Municipal Art Society tour led by urban geographer Jack Eichenbaum, "Where does Harlem Begin (Nieuw Haarlem)?"

I've written a bunch of times about Jack's illuminating perspective as a geographer: showing us how the development of neighborhoods and regions is conditioned by natural geography and features that develop, most often transport. In the case of the "real" Upper East Side, for example, that two-block-wide swath of high ground which eventually became the eastern boundary of Central Park was delimited on the other side from the pushing through, in the '80s, the New York and Harlem Railroad (later the New York Central, now part of the Metro-North system) over what was then still Fourth Avenue, and became Park Avenue only when the railroad was moved underground below 97th Street and covered over with, well, a "park" avenue. While the railroad was above ground, it marked a stark eastern boundary to that high ground where the city's elite had begun to move -- the rich, Jack always points out, generally gravitate to high ground. East of Fourth Avenue was literally "the other side of the tracks."

Once the railroad was safely buried, the new Park Avenue became part of the "real" Upper East Side, and became home to many of the growing city's most expensive apartment buildings, now that apartment living had become acceptable for the swells. (The original upper-class development along Fifth and Madison Avenues had been mansions.) Now the next blocks, to Lexington and Third Avenues, became suitable for middle-class residential development, but the even more noticeably dropping-off land was rendered further unsuitable by the pushing through later in the 19th century of the Third and Second Avenue Els. The els provided a huge impetus to development of previously little-used terrain, but for working-class and industrial use. When the els came down in the '50s, not just Third and Second Avenues themselves but the whole character of the area east of Third became ripe for change, but amid the considerable high-rise development that's taken place, it's still possible to see many of the low-rise 18th- and 19th-century buildings that once lined both avenues.

Thanks to Manhattan's rigidly rectangular street grid, as established in the 1881 plan whose bicentennial we celebrated last year, it's possible for even the most hardened New Yorkers not to notice that diagonal dropoff from higher-ground Manhattan to the valley that's Harlem. Oh, on any numbered street you'll notice the sharp descent going from west to east, and ditto on the avenues going from south to north, but unless you walk enormous numbers of adjacent streets, it's highly unlikely that you'll notice how the "dropoff" points shift as you move north and west.

And with a guide as knowing as Jack, it's possible to tread this terrain and see how all these geographical factors intersected with the socioeconomics of old times and new to condition the kind of development and redevelopment that took place -- visible, for example, in the degree of, um, fanciness, of the architecture. We started at the corner of Lexington Avenue and 86th Street, then headed east to Third Avenue and headed north, and shortly down the considerable hill, before beginning our westward trek. Reaching the northeastern corner of Central Park, we could more easily see that portion of the diagonal dropoff to the Harlem valley, and continuing on through central Harlem we got to see the broad avenues and stunning residential buildings that took shape when northward transportation made this area ripe for development. We wound up by climbing the western delineation of Harlem, up to the heights of Morningside Heights, home of Columbia University and so many high-toned cultural institutions.

I don't suppose this drab recital suggests much of the visceral excitement of the tour itself. I can only suggest that you watch for the next time Jack gives it (he said he does it every two or three years), and pounce.

WE HAVE SOME CATCHING UP TO DO

Over the last couple of months I've gotten a bit back in the urban-gadding groove, even pulling off a two-in-one-day this weekend for the first time in a long while. So there are a number of walks to catch up on, with a particular emphasis on walks led -- in three of NYC's five boroughs -- by people who actually live or have lived in the immediate area. I'm thinking the time may be right after this Sunday's Municipal Art Society walk through Brooklyn's Boerum Hill with Joe Svehlak, whose recent MAS walks through Ridgewood in Queens (mostly) and Brooklyn's Sunset Park (where Joe grew up and later moved back as a home-owner) were truly outstanding, so much so that I've slotted the Boerum Hill walk in ahead of another tour I'd really wanted to do.

But priority now has to go to Jack Eichenbaum, the Queens borough historian with whom, as I've noted a number of times, I've done some of the most eye-opening tours I've taken. I recently did an especially memorable MAS tour with Jack which substantially overturned and reoriented my understanding of the northern half of Manhattan -- this after I've lived in NYC for 50-plus years! And Jack has some tantalizing projects coming up.

First let me mention that anyone who happens to be free tomorrow (Wednesday) afternoon and is within striking distance of Jamaica, Queens, Jack is giving a lecture on "Queens: Topographic Influences" at 1:30 at Jamaica's Central Library (89-11 Merrick Blvd., between 89th and 90th Aves., accessible via the F train to 169th St.; free, no reservations required).

The library offers this description:

Ever wonder why Hillside Avenue is named Hillside Avenue, or why certain areas of the borough are hilly and other areas flat? Join us as urban geographer and Queens Borough Historian Jack Eichenbaum talks about the geography of Queens County.

Then, coming up this Saturday, April 21, 11am-1pm, Jack is giving a special tour, "Historic Jamaica Avenue," sponsored by the Queens Historical Society as a fund-raiser (at bargain-baement prices for a fund-raiser: $10 for QHS members, $15 for nonmembers).

One of the earliest settlements in NYC, Jamaica boasts centuries old homes, churches and cemeteries. Focusing on Jamaica Ave at the foot of the glacial moraine, we'll dwell on its strategic location, recent redevelopment strategies and make some interior visits.

AND WE'RE IN COUNTDOWN TO JACK'S "SIGNATURE TOUR: A
DAYLONG SERIES OF WALKS ALONG THE #7 LINE TO FLUSHING

As I've mentioned, Jack is doing "The World of the #7 Train" again this year, on Saturday, April 28, from 10am to 5:30pm. I did it last year, and am powerfully tempted to do it again. A word of warning: The tour did sell out last year, and Jack had to turn people away.