While we wait for tour announcements from MAS and the NY Transit Museum, here are some upcoming NY area tours for your schedule 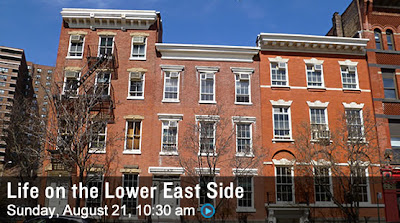 I was really looking forward to this morning's MAS walking tour of Manhattan's Lower East Side, but no, I was still struggling with my Sunday Classics post on Andrea Chénier. Oh well.

I've recovered my wits a bit since the post I wrote yesterday upon return from the New York Transit Museum's subway-and-bus Nostalgia Tour to the Rockaways, and I want to add some information.

First, while I focused on NYTM and Municipal Art Society (MAS) tours, anyone who clicked through to the respective websites would have found the tour cupboards pretty bare. (Well, MAS had an awfully interesting-looking walking tour of Manhattan's Lower East Side scheduled for this morning, but I had to blow that off because I was doing battle with Andrea Chénier.) I should have mentioned that both NYTM and MAS are presumably days if not hours away from announcing schedules that cover September and beyond.

I've been checking the MAS website daily. Oh, even the tours that require preregistration won't sell out that quickly, but I'm kind of out of my mind with excitement to see what MAS's Tamara Coombs has cooked up for us. And for your planning purposes, it's wise to assume that the tours that do require preregistration will sell out well before the tour date. The prices are ridiculous for tours of this quality -- as of the summer offerings, still $10 for members and $15 for nonmembers for most tours. (Longer tours or more elaborate tours are priced higher.)

In the case of the Transit Museum, the smartest thing you can do for now is to become a member. While it's technically true that very few of its tour offerings require you to be a museum member, in fact members take such advantage not just of the lower members' price but of the early registration period that it's awfully hard to squeeze onto most of the tour lists if you aren't a member. I can't wait to see what Luz has cooked up for us, and assuming I have the information in time, I plan to do what I did this summer: call in with my request list as early as possible the morning of the start of the registration period!

In July I wrote with great excitement about the first of three Hidden Harbors Tours I was doing, arranged jointly by the Working Harbor Committee (WHC) and Circle Line Downtown this one through the Kill Van Kull, which separates the west of Staten Island from New Jersey, to exotic Newark Bay. The trip was fantastic! Since then I've also done "The Brooklyn Tour," which took us up the East River to the junction of Newtown Creek, then close along the Brooklyn waterfront until we swung across New York Harbor past Staten Island to the opening of the Kill Van Kull and the New Jersey shore, then past the Statue of Liberty and back to the Fulton Street pier. We did much of the trip with lightning flashing, and then a wild thunderstorm broke out just as we passed the Battery for the short trip back to the pier -- it's a shame they can't plan on including this effect all the time!

I mention them now because both "The Newark Bay Tour" (September 13) and "The Brooklyn Tour" (September 27) have one more incarnation coming up for the current season, while the final offering of the "North River Tour" (i.e., the Hudson River, formerly known as the North River) which I haven't done yet, is this Tuesday, August 23. I bought all my tickets online; there's a discount for WHC members.

For all the tours, the WHC's Captain John provide running commentary along with a guest for the particular tour. One event he has talked about on both the tours I've taken is a circumnavigation of Staten Island, for which the date has finally been announced -- Sunday, October 16 -- and ticket sales begun. A planned WHC Lighthouse Tour sold out before I had a chance to book it, so I wouldn't wait on this one. (As a matter of fact, I didn't!) 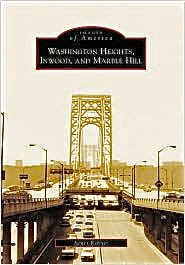 I also wanted to report on an exciting series of tours "WAHI Tours" of Northern Manhattan being offered Sundays from September 11 through October 16 at noon by James Renner, author of Washington Heights, Inwood, and Marble Hill (Arcadia Publishing; I haven't had a chance to get my copy yet!), and the official Community District 12 Manhattan historian -- priced at $15 for adults, $10 for seniors and students. I'll write more about them soon.
#
Posted by KenInNY at 6:00 PM