Urban Gadabout: A year later, I finally made it to the Rockaways Nostalgia Tour 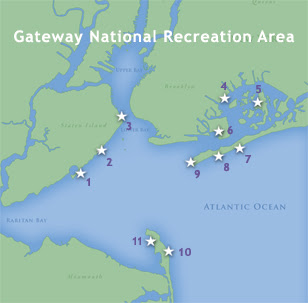 It was full circle for me today, participating in the New York Transit Museum's final Nostalgia Tour of the summer, to the Rockaways -- not so much because I participated in all three of the summer's Nostalgia Tours (the previous ones were to Woodlawn Cemetery in the Bronx and Coney Island in Brooklyn), not to mention a slew of other NYTM tours over the last year, bt because it has been a year. It was last summer around this time that I took advantage of a half-price offer for NYTM membership just in time, I thought, to go on its first-ever combined subway-and-bus Nostalgia Tour -- taking a train of vintage cars as far as the subway will take you on the Rockaway peninsula, to Rockaway Park, and then piling onto vintage buses for the additional journey farther west, beyond the residentially settled area of Rockaway to Jacob Riis Park, yet another Robert Moses creation of the '30s.

The problem was last year that I hadn't booked ahead, but knew that there was space on a walk-up basis, but didn't know that they weren't taking credit cards. I had meant to stop at an ATM en route to the Transit Museum that morning, but I was worried that I was running behind time-wise. As it turned out, I arrived in plenty of time, and waited in a long line, only to find out that no, they were taking cash only. Somebody said something about a bank nearby, but I couldn't rally myself.

An inauspicious beginning, but when the next batch of tours was announced, I took advantage of the week's advance reservation period for members, and began a year of discovery, fascination, and wonder in, literally, all five boroughs of New York City. It's a city I've lived in since I was 12 (no, I'm not going to tell you how many years ago that was, but it's a lot, though still on this side of

Via Transit Museum tours I've seen things I literally couldn't have seen any other way: the Coney Island subway repair center and signal tower; behind-the-scenes Penn Station including its ultra-secure command station; the inside of the awaiting-development Farley Post Office. Some of these are things we probably still should talk about. And there were a host of others, thanks to Luz, the indefatigable director of NYTM's tours.

Perhaps the most profound impact was from the tour that introduced me to "urban geographer" Jack Eichenbaum (the Queens borough historian), who took us to and through three subway "nodes," places where two or more separate subway lines intersect -- the ultimate node, Times Square in Manhattan, plus Queens Plaza and Jackson Heights in Queens -- and showed us how the intersection of those subway lines shaped the subsequent development of the areas. It set me on a whole other way of thinking about, well, places. After all, every place where there's human habitation exists where it does for a set of specific reasons.

That has changed my life, and since then I've seized a bunch of opportunities to take tours with Jack which aren't like anybody else's, always showing us places that hardly any other tour leader would think to show people. (I would have to single out the all-day tour of the No. 7 line to Flushing, Queens.) But my life was also changed by a tip Jack gave us: about the Municipal Art Society. I'm embarrassed to say that all these decades it was just a name to me, and I assumed it had nothing to do with me, since I am not what you would call an "art person." But MAS's concern is the municipal art, the art of making a more livable city, and as I've written here, MAS tours have become inextricably with my week-to-week life -- there have been a bunch of weeks when I've done MAS tours back-to-back on Saturday and Sunday.

I would be tempted by pretty much any tour announced to be led by my MAS standbys: Jack Eichenbaum, of course, and the more architecturally oriented Matt Postal and Francis Morrone, and the boundless-spirited and inexhaustibly knowledgeable Justin Ferate. I've been to bunches of places on Staten Island with Justin and Francis (and the MAS's equally indefatigable tour director, Tamara Coombs, who's a Staten Islander herself), where I'd previously hardly ventured beyond the St. George ferry terminal; and lots of places in Brooklyn with Francis and Matt, and learned to look at Manhattan skyscrapers a whole other way with Matt, and . . . well, I could go on and on, but I won't. ditto with all the other tours I've found my way to. It's been quite a year! (Oh yes, when I got a renewal notice from the Transit Museum, I sent my check in that very day.)

I'll just say that Rockaway was a blast today, and it was especially interesting wading in the surf -- real surf, since this is open ocean, in contrast with the beach at Coney Island, which as Joe Svehlak had just pointed out to us in an MAS tour of Coney Island, has the protection of being inside the Lower Bay of New York Harbor. You see how these things all fit together? One of the things I've written about here most often is my fascination with New York as a coastal city, a major harbor.

I know I'm babbling, and have left out all sorts of points I planned to make. But it's been a long day!
#
Posted by KenInNY at 6:00 PM