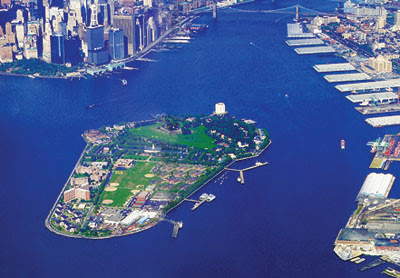 Aerial view of Governors Island, off the southern tip of Manhattan
(with the Brooklyn waterfront off to the right)
by Ken

For this weekend I've had a couple of Municipal Art Society walking tours penciled in all summer, and as the dates approach I've grown more and more enthusiastic. The only problem: The weather forecast for the weekend is lousy, with talk of thundershowers both afternoons. Some other time I want to write about the weather factor, something that's obviously wholly beyond the control of tour planners and leaders and yet has so much to do with the success of the walk out come -- not to mention whether there actually is a walk.

But for now I'm hopeful about this weekend's MAS offerings: "Governors Island: Heart of the Harbor," Saturday at 11:45am (meet at the bike rack to the west of the Battery Maritime Building); and "Coney Island: What's Next?," Sunday at 10:30am (meet in Coney Island outside the Stillwell Avenue subway station, on the northeast corner of Stillwell and Surf Avenues).

I should go back to that point I made about having these tours "penciled in." MAS schedules its walking tours in two different configurations. Some are booked ahead, by advance (paid) registration; others are offered strictly on a walk-up basis. The idea is to accommodate different kinds of tour-takers, and to make sure that even when the advance-registration tours sell out, as they usually do, there are still tours available on a walk-up basis for people who don't like, or weren't able, to book the other kind. And it happens that both of these MAS tours are of the walk-up variety, which is why I've only had them "penciled in."

Turnout for the MAS walk-up tours is of course wildly unpredictable. On a nice day, turnout may be massive. On a miserable day, it can get mighty lonely. It's only in extreme weather situations that a tour is canceled. (I'm keeping the "hot line" number, 212-453-0050, handy.)

Saturday, August 6, 11:45 a.m.-2:00 p.m.
Governors Island: Heart of the Harbor
Governors Island offers a singular vantage point from which to see the last 200 years of the life of New York Harbor and a glimpse into the next 200. Join us for a look at the island of today as well as the opposing waterfronts of tomorrow. We’ll also take in the award-winning Harbor School and discuss the opportunities and challenges the island offers as it enters its new life as a public space.
Tour Leader: Carter Craft, civic activist and a leading waterfront planner.
Meet at: The bike rack to the West of the Battery Maritime Building.
Cost of Tour: $15, $10 MAS members. Pay at tour.

The reason I've been getting more excited about this tour is that I did some online investigation of tour leader Carter Craft, who was formerly program director of the Metropolitan Waterfront Alliance, which was founded in 1999 as an initiative of . . . the Municipal Art Society (!), and then in 2007 was spun off as an independent entity. Carter has carved out a career for himself as a "waterfront planner." 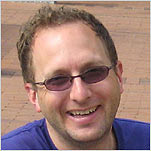 In July-August 2007 he fielded three days' worth of waterfront-related questions from readers of the New York Times's City Room blog, and he's written a slew of column features for Gotham Gazette, among a help of readily available online writings. Of particular interest to me was a piece he did for UrbanOmnibus last summer previewing the Museum of Modern Art's "Rising Currents" exhibition, which (the introduction explained) would "display the design schemes of five interdisciplinary teams, charged with re-envisioning 'the coastlines of New York and New Jersey around New York Harbor and [imagining] new ways to occupy the harbor itself with adaptive "soft" infrastructures that are sympathetic to the needs of a sound ecology,'” obviously with reference to the expected rise of water levels in the harbor. If you look at Governors Island, just off the southern tip of Manhattan (I reported on my first trip there, in 2006 and returned just a couple of weeks ago, taking advantage of the free ferry service provided all summer), it looks like the damned place is maybe a few inches above the water.

Sunday, August 7, 10:30 a.m.
Coney Island: What’s Next?
As we explore America’s first great seaside resort, we’ll look for remnants of Coney Island’s “honky-tonk” past, when as many as a million people would visit “Sodom by the Sea” on a hot summer day. View Nathan’s Famous, the popular ballpark, the new amusements, the historic rides and enjoy the boardwalk as we discuss the struggle to designate landmarks and the future of the fabled resort.
Tour Leader: Joe Svehlak, urban historian.
Transit: D, F, N, or Q Trains to Coney Island.
Meet at: Outside the Coney Island/Stillwell Ave. subway station at the N.E. corner of Stillwell and Surf avenues.
Cost of Tour: $15, $10 MAS members. Pay at tour. If you want to go for a swim with Joe after the tour, wear your bathing suit!

As for Coney Island, I was just there for the second of the New York Transit Museum's three Nostalgia Ride days (there's one still to come, on August 20, using vintage subway cars and buses, to the Rockaways), and was happy to have a tour of the rebuilt Stillwell Avenue station (opened in 2005), which services four separate subway lines. And I was surprised to see that there have been other changes -- for better and worse. I'm ready for a proper onsite update. 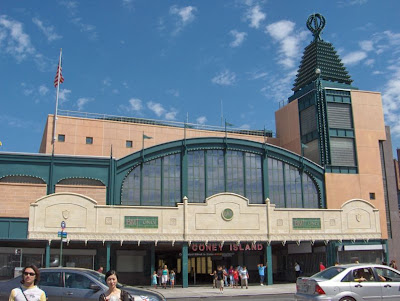 The rebuilt Stillwell Avenue station at Coney Island,
where four subway lines come together
#
Posted by KenInNY at 6:00 PM