Planning Ahead For Nepal And Tibet 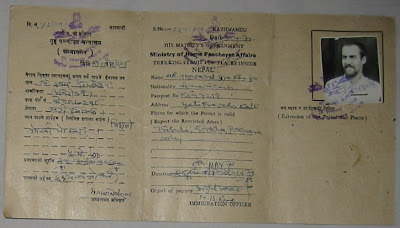 My trekking permit from 1971
The first time I was in Kathmandu was 1971. Nepal had just gotten it's first paved road-- in honor of the marriage of the Crown Prince. For me it was like a pilgrimage... the end of the road after a long, hard trip from England, across Europe, Turkey, Iran, Afghanistan, Pakistan and India. This summer we're going again, my third time, Roland's second. The reason isn't just to visit Nepal again, but to take the next step: Tibet.

The Chinese don't make it easy to get in. In the past you could drive up to the border and stare. It opened up quite a bit in the last few years-- even to the point of allowing individuals to wander through the country. That's over now. The only way to get an entry permit is through an authorized travel agent and you're obligated to book a tour with a guide/minder. Getting the tickets are difficult too. You can't buy them online and doing it on the phone is fraught with roadblocks. I had to spend the entire day arguing with people at Air China yesterday. But in the end I got the tickets, $709.70 roundtrip, although they made me sign a letter saying that if I couldn't get the entry permit I wouldn't get a refund.

I'll keep copious notes on Tibet and report back. As for Kathmandu, we'll see how different it is from the link above (which mostly covers 1971). The monarchy is gone, of course. I was just reading yesterday that the new Prime Minister, Jhalanath Khanal, is the chairman of the Communist Party. The political stability of the country is tenuous. Great report in the Al Jazeera video below. Last time we stayed at the Yak and Yeti but we're thinking about Dwarka's this time. Anyone been to Kathmandu recently with any suggestions about a hotel?

I don't want to get anyone in trouble-- especially not myself-- so let me figure out how to give away all the secrets of booking this whole Tibet thing for after I get back. I'll say one thing though-- well two: normal travel agents can't or won't do it and everything is very negotiable... everything.

come view my blog too..