Hawai'i's economy isn't totally based on tourism. Military spending is also a factor. But mostly it's tourism. The state, basically 19 volcanic islands, offers unparalleled natural beauty, great surfing, tropic rainforests, a choice between a slick, luxurious tourist industry or an opportunity for spiritual peace and quiet. And it isn't seasonal; the weather is always alluring. Hawai'i gets around 8 million visitors a year-- and they bring over $10 billion a year into the economy. A rule of thumb around the world is that American tourists spent five to ten times more than tourists from other countries. Hawai'i is the exception. The average Japanese tourist spends more than the average American tourist in Hawai'i-- and their presence-- even as more South Koreans and Chinese are starting to visit-- has declined. 2009's sharp increase in South Korean visitors (55,000, up 43% over 2008) came at a time when declines in Hawai'i's top five visitor markets contributed to an overall 4.5% drop in visitor arrivals. Arrivals from Japan, long the mainstay for tourism-- about $2 billion worth in 2010-- fell by 4.9% to 1.1 million visitors.

Hawaii tourism officials are worried fewer Japanese tourists are visiting the state and are trying to figure out how to reverse the trend.

Japanese visitors spend more on average in the islands than travelers from the U.S. mainland and other countries, making them valued customers for the state's tourism industry.

"We're all concerned because Japan is still a much-sought-after and important market for the state," said Marsha Wienert, the state tourism liaison.

Industry experts say fewer flights from Japan, fuel surcharges on those flights, and a rise in Hawaii hotel room rates are encouraging Japanese tourists to go elsewhere for their vacations.

And that was before the earthquake, tsunami and Fukushima. The average Japanese tourist in Hawai'i spends $261.90/day (compared to $231 for a Korean and $322.70 for a Chinese tourist). The NY Times reported this week that the catastrophic in Japan is making an already bad trend for Hawai'i even worse.

The tour and hotel cancellations began within hours, and they have been continuing-- a reminder of how dependent Hawaii is on tourists who make the nine-hour trip here from Tokyo. State officials, well aware of the history of Japanese tourism fallout after other calamities-- including the Kobe earthquake in 1995 and the swine flu epidemic in 2009-- are now bracing for a sharp drop in tourism and the revenue it produces.

“We are heavily dependent on Japanese visitors,” said State Representative Marcus R. Oshiro, a Democrat from Honolulu and the chairman of the House Finance Committee. “There is no doubt in my mind that at least in the short term, we are going to be severely impacted by the earthquake and tsunami. It may be anywhere from $15 to $20 million in state revenues lost just from that tourist market.”

Japanese tourism is not what it once was: Last year, 1.2 million Japanese visited Hawaii, down from a peak of about 2.2 million visitors in 1996. The downturn reflects the effects of the worldwide recession but also changing travel tastes of Japanese tourists. But by any measure, Japanese citizens are a critical part of the tourism industry, which is a critical part of the state’s economy.

Japan ranks third in the number of visitors it sends to Hawaii, following the Western and Eastern United States mainland, but Japanese tourists are much more aggressive spenders and thus contribute disproportionately to the economy. They spend far more money per day on food, hotels and shopping, particularly luxury goods. A typical visitor from the Western United States spent $146 a day last year, while a Japanese tourist spent $274, state officials said. 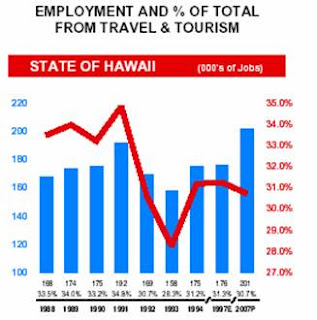 Hawai'i itself didn't suffer too much physical damage from the tsunami. The Big Island’s Kona Village Resort and the Four Seasons at Hualalai took some major damage and both are closed. So far there hasn't been any radiation from Japan detected.
Hawaii Gov. Neil Abercrombie estimates the loss in revenues from Japanese tourists will be in the tens of millions of dollars.

According to Abercrombie, “The economic consequences will be severe for us… it’s going to be terrible. It’s something we have to come to grips with.” David Uchiyama, the Marketing Director of the Hawaii Tourism Authority, told USA Today that “this is just the first shock wave… a cultural sense of obligation and responsibility ” holds Japanese from international travel during domestic crises.

This sentiment is also shared by Jürgen Thomas Steinmetz, president of the privately-held Hawaii Tourism Association (HiTA). Steinmetz has made some waves in Hawaii in recent years, criticizing the government-run Hawaii Tourism Authority for not diversifying enough beyond traditional markets such as the U.S. West Coast and Japan… a shortcoming that is now coming to roost as the state will have to scramble to make up for the expected drop in arrivals from Japan.

According to Steinmetz, the Japan tsunami and its aftermath are a wake-up call for Hawaii to reach out to new markets. At the top of his list: wealthy countries whose citizens don’t require a visa to enter the US, such as most of Europe, Singapore and Brunei. Steinmetz, who hails from Germany, believes that Europe is a particularly promising opportunity: “Europeans not only love to travel but get a lot of vacation time. Where Americans might stay for days, European tourists can afford to think in terms of weeks.” The Aloha State might not exactly be around the corner from Frankfurt or Rome, but Europeans don’t hesitate to travel to New Zealand, or Fiji. So why not Hawaii? China and India are also promising markets in Steinmetz’s view.

For starters, Hawaii Tourism will need to learn that showing up is half the battle. At ITB Berlin, the world’s largest tourism trade show, Libya and Afghanistan were represented. Even the Seychelles, which has a small fraction of the population and per capita income of Hawaii, had dozens of exhibitors. According to Steinmetz, Hawaii had no comparable presence.

It might be too early to tell if Hawaii’s 2011 and 2012 tourism prospects will be a case of “too little too late” or “saved by the bell.” But one thing is clear: it’s high time to diversify.

Posted by DownWithTyranny at 10:49 AM