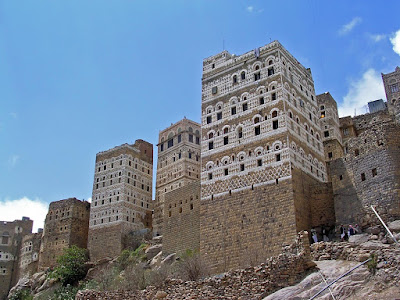 In the best of times Yemen is always rated among the top 10 most dangerous countries to visit. And things have gotten worse this year. In fact, this weekend, every member of the cabinet who hadn't already resigned to protest President Ali Saleh's brutal crackdown on pro-democracy protesters, was summarily dismissed by Saleh. The minister of tourism, Nabil Hasan al-Faqih, had already quit Friday, citing the "unjustifiable use of force" against protesters. After all, there hasn't been much for him to do lately. In 2009 we looked at how dangerous Yemen was for tourists even when revolution was just smoldering in the background. And now Arab and international investment has decreased and tourism has dried up. Five star hotels in Aden, Sana’a, Mukala and Taiz are complaining about the significant decrease of tourists from Yemen and abroad.

Yemen's nascent tourist industry isn't the only one hit. Tourism across the whole Middle East is suffering-- if not comatose. Travel agents and governments are warning tourists away from Yemen-- as well as Egypt, Tunisia, Libya, Bahrain, Jordan, Lebanon, Oman and Algeria.

Travel to the Middle East is suffering a double whammy. Images of mass protests and outright war have scared visitors away while oil prices are lifting the cost of jet fuel and airfares. Last year’s fastest-growing travel market and looking forward to another good year in 2011, the Middle East industry is now in trouble, Euromonitor International says in a report.

...As of last week, the US State Department has travel warnings issued for nine Middle Eastern countries and travel alerts for two others. The latest addition to the list was Yemen. Britain has advised against any travel to Libya and Yemen and has more limited warnings for Bahrain, Iran and Iraq.

Here's the official State Department warning as of March 6 (and, keep in mind, things have gotten far worse since then, with hundreds of people killed by Saleh's forces:

...The security threat level in Yemen is extremely high due to terrorist activities and civil unrest. Piracy in the Red Sea, Gulf of Aden and Indian Ocean is also a security threat to maritime activities in the region. Terrorist organizations continue to be active in Yemen, including Al-Qaeda in the Arabian Peninsula (AQAP). The U.S. government remains concerned about possible attacks against U.S. citizens, facilities, businesses, and perceived U.S. and Western interests. There is ongoing civil unrest throughout the country and large-scale protests in major cities.

Yemen is country that everywhere just simply must be visited. It is a tourist's country, where although the accommodation might not be the best, but the country itself holds so many treasures that appeal to any open-minded visitor. The sights are amazing, the people are friendly, their culture is unique, and their food is tasty. Take trips with a personal driver through the mountains to see natural beauty located nowhere else on the planet. See the historical role Yemen played as it survived even during the times of the Sumerians and the Ancient Egyptians, and how no one was able to completely conquer Yemen. And enjoy what the country provides, like gemstones literally littered throughout the mountains, precious beaches, and historical artifacts from this multi-faced nation with one heartbeat... [T]he rewards for the persevering tourist are an unforgettable experience, populated with very friendly and open hosts. Despite being adjacent to Saudi Arabia and on the same peninsula as the United Arab Emirates, Yemen is definitely a place apart.


UPDATE: Tyrant Offers To Step Down

Now that many of the country's top generals have joined teh tourism minister in deserting Ali Abdullah Saleh, the dictator, the government has all but collapsed. Saleh is trying to negotiate for his life by offering to step down.

Back-channel negotiations between the controversial U.S. ally and Maj. Gen. Ali Mohsen al-Ahmar-- a top commander who withdrew his loyalty from the president on Monday-- haven't yet yielded a clear transition of power, but the political process so far has succeeded in keeping the power struggle from devolving into military conflict or civil war.

Tanks commanded by Mr. Saleh's son are deployed around the presidential palace in the capital, while tanks manned by forces loyal to Gen. Ahmar have set up nearby, as well near several sensitive government buildings, like the Central Bank, according to residents.

The prognosis of the talks remain unclear, and the threat of military conflict remains a possibility, according to officials in San'a. Saudi Arabia and Yemeni tribal leaders are involved in the negotiations, according to people familiar with the situation, but President Saleh appears to be staking out untenable terms.

Posted by DownWithTyranny at 5:30 PM