Tourism In The Middle East And Magreb? Barely A Pulse 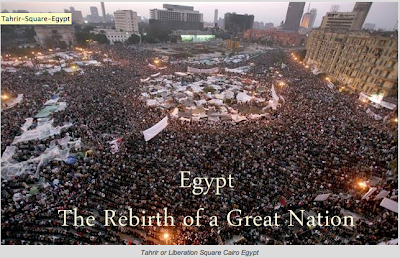 Arizona tourism went into the crapper as soon as violent extremists started running around the state with hate messages and unrestricted guns. Even Frommer warned the state is too dangerous to visit. I know Wisconsin is a popular tourist destination year round and I'm not sure if the right-wing turmoil in Madison is having any impact on the state's tourist industry-- not to mention the fried cheese curd and bratwurst makers. But some of the other areas where people are fighting for the human rights and dignity-- like Libya, Bahrain and Tunisia-- the tourist industry is dead in the water. Wikipedia's Libya Travel site starts with an ominous-looking warning sign: "WARNING: As of February 2011, Libya is in a severe state of political and civil crisis. Military, police and security forces are using deadly force in attempts to quell civil unrest in many parts of the country. Reports have emerged of thousands of people having been killed or seriously injured. If you are already in Libya, stay away from large public gatherings and try to gain independent and reliable information about the political and civil situation in your area. Try to organize a secure exit from Libya by contacting your country's embassy or their representatives either in Libya, your home country or neighbouring nations. The governments of many nations have issued formal travel warnings, research these warnings in depth before travelling to or moving about within Libya. Many nations have also recommended their citizens in Libya should leave the country immediately and some have managed to arrange evacuation flights or other means of travel. The situation is highly volatile, care and elevated situational awareness must be exercised at all times if attempting to move about or transit through effected areas of Libya." Not very alluring-- and a disaster for the country's small but developing tourist industry.

Morocco's tourist industry is far more developed-- and a crucial part of the country's economy. Tourism is way down as Europeans-- forget Americans-- wonder if the country is safe or likely to be the scene of violent protests like the rest of the Maghreb.

As the Egyptian and Tunisian destinations were collapsing, travel agents all over Europe were offering Morocco and the Canary Islands as alternatives for cancelled trips.

In Germany, Europe's greatest market, travel agents in late January and early February openly campaigned for Morocco as the safe and quiet alternative to Tunisia and Egypt in local media. Similar campaigns were registered in the UK, Scandinavia and France.

Consequently, flights to Morocco from Europe over the last few weeks have been fuller than ever during a low season. Morocco today published record arrivals for January, and the growing Moroccan tourism industry was making important extra revenues.

But these short heydays are now over. Each and every day, international media are overflowing with reports from the protest wave spreading to new countries. There is a widespread impression it is only a question of time for unrest and revolution to reach Morocco.

An American tourist spends something like 8 times what other tourists spend... and Americans have been the first to cancel their trips to anyplace remotely dangerous-sounding. Even now, with Europeans beginning to trickle back into Egypt, Americans are booking trips to Hawaii, Las Vegas and Bermuda instead.

Egypt earns upwards of $13 billion a year from its tourism industry -- an integral part of the nation's struggling economy.

"The recent popular protests in Egypt will definitely have a short-term economic cost," Ahmed said. "We will see tourism and investment going down, and certainly the 5.5% growth rate that we saw in the last two quarters of 2010 will likely be considerably lower in the next six months."

And that decline in tourism isn't likely to change anytime soon. The U.S. State Department is still warning Americans to stay away from Egypt for "non-essential travel."

"Due to continuing uncertainties regarding the restructuring of Egyptian government institutions, the security situation remains unresolved," the department said in a travel warning posted on its website. "Until the redeployment of Egyptian civilian police is fully restored, police response to emergency requests for assistance or reports of crime may be delayed."

The U.S. government has also ordered the departure of all nonemergency personnel from Egypt. Cairo is one of the largest duty stations in the world, with thousands of U.S. employees administering economic and military aid.

But British Prime Minister David Cameron visited Egypt this week-- and his government is allowing British tourists to return to Sharm el-Sheik and the Red Sea resorts. So has Germany's government.


Today's NY Times puts on a brighter face, pointing out that Tahrir Square has become a new tourist destination.

Many tourist sites in and around Cairo are open again-- from the pyramids to the Khan el-Khalili souk to the Egyptian Antiquities Museum. But these days the most sought-after photo is not one of Tutankhamen’s mask but of Tahrir (Liberation) Square, a mammoth traffic circle the world had stared at for three weeks on television. Named after Egypt’s 1919 liberation from the British, Tahrir Square is a top destination for many of the Western tourists who have begun trickling into Egypt in recent days.

“It is amazing what has happened here,” said Aart Blijdorp, a 60-year-old civil servant from the Netherlands. He had flown in a few days earlier to attend the seven-day anniversary of Mr. Mubarak’s resignation, a gathering on Tahrir Square that the protesters hope will become a weekly Friday event to remind the current military government of their continuing demands for reform. “The optimism in the air was so apparent on the news, I had to come feel it for myself,” Mr. Blijdorp said, after introducing me to two young protesters he had met in the square. They had become Mr. Blijdorp’s tour guides around Cairo.

“We have been taking him around because he is traveling on his own,” said Omar Ahmed, 23, a civil engineer, adding that they were off to the Citadel, but that Mr. Blijdorp wanted to come back to Tahrir Square first.

“The good news is he is seeing everything fast, because no one is here,” said Hamdy Mohammed, 24, a law student. “But we want tourists to come back because it is a new Egypt now.”

“So far, Tahrir is my favorite place,” said Mr. Blijdorp, who had visited the Pyramids the day before.

The allure of visiting Egypt at this moment hasn’t been lost on some tour operators. For example, Akorn Destination Management (akorndmc.com), which bills itself as an organization that delivers “inspirational travel experiences,” is offering “Tahrir Square-- Egypt Is Making History,” a trip that includes a Nile cruise, a walk through Tahrir Square and a stay at the Semiramis InterContinental Hotel, which is near the square.

As Rick Zeolla, the general manager of the Cairo Marriott, where Christiane Amanpour and many other journalists stayed, put it: “Right now Egypt is like having a fast pass at Disney. People should come over.”

Amr Badr, managing director of Abercrombie & Kent in Egypt and the Middle East, believes now is a unique time to visit Egypt and see history in the making. “I think people will immediately feel the energy,” he said, noting that the streets are now cleaner than they have been in recent memory, and that Tahrir Square has become a “living exhibit-- a sort of Speaker’s Corner” in Egypt that they plan to promote. Egyptians, he added, are feeling a newly found sense of pride in their country. “If Egypt was good before, it will be better now,” he said.

Michael Koth, general manager of the Semiramis InterContinental, said his clients are no longer asking for a “Nile view” room but a Tahrir view. “The early guests we are seeing are more independent, well seasoned and globally focused travelers,” Mr. Koth said.

Mali was probably more "dangerous" when nothing was especially going on, politically speaking. Here below is a photo I took of Roland on rue Guide Mouamar El Kaddafi in Timbuktu. Last week we were in Guadalajara, right after a terrorist attack that left nearly 50 people dead or wounded. Everyone we knew told us not to go. Yet the place seemed safer than New York or L.A.-- and the prices were down and the crowds much smaller, making everything easier. We love Guadalajara anyway, but it was even better with all the wooses scared off. Nothing would get me to Libya 'til the Qaddafis are dead-- which could be weeks away-- but we're already thinking about a trip there soon. Arizona... not so much. 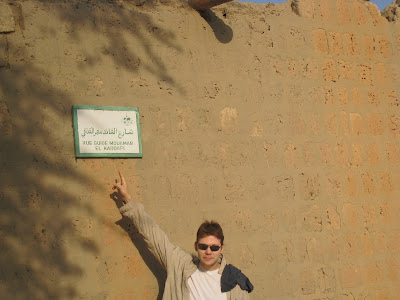 Posted by DownWithTyranny at 5:26 PM

nice blog thanks for sharing with us