The Problem With Brazil... 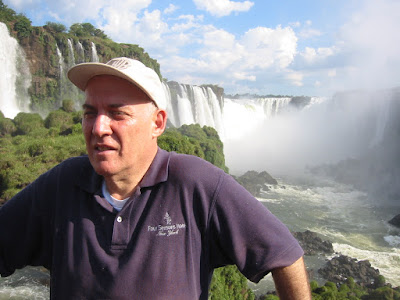 Actually, I loved every second of my short trip to Brazil a few years ago when I visited the Iguazu Falls National Park, where Brazil, Argentina and Paraguay meet. After much research, I decided to stay on the Brazilian side, even though that meant dealing with the hassle of getting a Brazilian visa, something easy for Europeans... but hard for Americans-- well, not really hard, but expensive and time-consuming. And it's a hassle, purposefully so. Simple explanation: tit for tat. The Brazilians are doing exactly to American tourists what the U.S. does to Brazilian tourists. I found an easy way-- well, relatively easy way-- 'round the problems, which I explained in the link above, that fit right into my schedule: the Brazilian consul in Buenos Aires.

Today Catharine Hamm, the L.A. Times travel editor, as part of a q & a grapples with it for pissed off Americans who aren't aware the Brazilians are simply responding to Bush-era restrictions on their nationals that Obama hasn't gotten around to fixing.

“There is some promise in this issue,” said Mario Moyses, vice minister of tourism for Brazil, noting that 600,000 Americans last year visited the emerging South American superpower.

But, so far, it remains a promise. Even if you’re visiting on a cruise and staying eight hours, you need a visa, according to the local Brazilian consulate. At $160, your visit will cost you $20 an hour.

Chalk it up to a little diplomatic tit for tat. What the U.S. charges Brazilians for a visa, Brazil charges U.S. citizens.
“It is not a punishment, but an international procedure between countries,” Moyses said.

I’m not sure why the tone is so cranky, but maybe travelers to Brazil have been trying to game the system. Or maybe Americans are pushier than the average bear. (No. Really?)

...Brazil does not require Western Europeans to have a visa. Of course, neither do we.

With Brazil slated to host soccer’s World Cup in 2014 and the Summer Olympics in 2016, perhaps this is an opportune time to end this diplomatic tantrum. As parents often tell squabbling siblings, it doesn’t matter who started it, and it doesn’t really matter why. It does matter that travelers get caught, yet again, in affairs not of their own making.

Brazil's worth the hassle and we're planning a trip to the northeast -- Recife and Bahia-- where I have a large extended family.
Posted by DownWithTyranny at 3:15 PM

As a Brazilian traveler, visa is always a problem. American visa, even worst.
At American Consulate placed in São Paulo, a person wait 100 days to get the interview. Than, more 5 work days to get the passport back. And it's not much different in the consulates on Rio de Janeiro, Recife or Brasilia. You can ask for a travel agency to help with an "emergency case". But than, you would spend 900,00 reais for the visa (about 450,00 us dollars).