Planning A Trip To Morocco 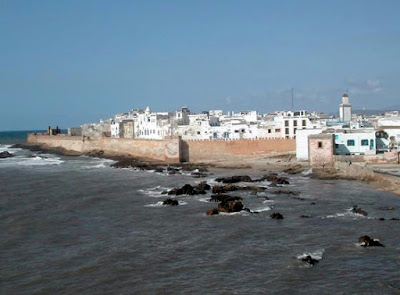 Yesterday I booked my flights from L.A. to Marrakesh. Roland said it'll be his 5th trip there. It'll be my 14th! The first time I went I drove. Not from L.A.-- from Germany, where, in 1969, I had purchased a VW camper van, which became my home for several years, and drove around Europe, wound up in Spain, and then took a ferry, with the van, from Algeciras to Ceuta. (Algeciras is at the bottom of Spain and you can get a ferry to Ceuta, a lonely Spanish colony they haven't given back yet, or directly to Tangier, which is what I've always done since that first trip. Except when I take a plane-- which is what I'm doing this time. No carefree two-three months to drive around Iberia and Morocco this time-- just 3 week conventional holiday in Morocco. And in the old days, you had to more or less fly to Casablanca and then get to Marrakesh or Essaouira from there.

Now it's almost convenient to just fly directly to Marrakesh. I say "almost" because it's still a small regional airport and not many international flights-- other than charters-- go in and out. I found one on a subsidiary of Royal Air Moroc, Atlas Blue, which I had never heard of. But it flies from Heathrow to Marrakesh. The only thing I'll miss about Casablanca is Le Port de Pêche, one of my favorite seafood restaurants anywhere, a consolation for anyone who is forced to travel to an otherwise must-to-avoid (more or less) Casablanca.

Anyway, today's New York Times Travel Section is all about Morocco. The raison d'etre for all that space is a music oriented piece on Essaouira, the wonderful seaport on the Atlantic Ocean I discovered after Marrakech back when I first started coming to Morocco. I knew Jimi Hendrix a little from New York and he was there too, taking a rest before going to play at the Isle of Wight Festival (where I was headed as well). Essaouira was a lot sleeper then than it is now. And now-- every June-- a guy I met years and years ago hosts a big (5 day long) music festival. It highlights gnaoua music which is a mixture of African and Arab musical traditions.

Unlike festivals staged, à la Woodstock, in muddy, middle-of-nowhere pastures, or worse, in vast, overheated football stadiums, the Gnawa’s setting, in a small, friendly and almost impossibly picturesque, wind-cooled seaside city, is as magical and mesmerizing as the music.


Roland's pissed off because the article on Eassouira doesn't mention any of the really great seafood restaurants that make the city one of the culinary capitals of the country. I'm delighted; the fewer tourists who have those places on their agendas, the more room for us when we're back the in a couple months. I'll do a more comprehensive guide to Essouira restaurants when we're there, meanwhile, suffice it to remember that it's the home of nutty, delicious argan oil.

Posted by DownWithTyranny at 2:35 PM