Planning A Trip To Tibet? 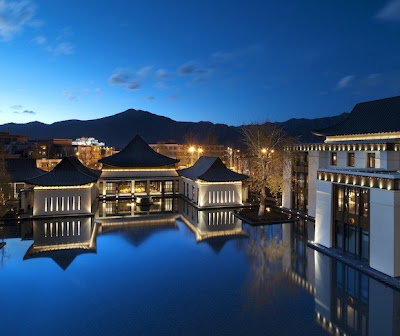 St. Regis, Lhasa-- guests complained when they ran out of lobster
In 1971 I trekked up near the Nepali-Tibetan border and wondered if I'd ever get across it. Back then no Americans were allowed. Now, China encourages American tourists... kind of-- and sometimes. There's even a 5-star hotel there now, as China works to turn Lhasa into a kind of Disneyland destination for the wealthy.

For decades, the hardy travellers who braved the icy roads and 2,000-kilometre drive to Lhasa from Sichuan have been greeted with austere monasteries filled with crimson-robed monks and the terrible taste of yak-butter tea.

But the Chinese government, which defends its mandate to rule over Tibet by claiming to have brought economic prosperity to the region, is determined to make life more luxurious for today's pampered tourists by opening Tibet's first five-star hotel--The St. Regis Lhasa.

Guests arriving at Lhasa airport are whisked away in Mercedes-Benz limousines to one of the 150 suites or 12 private villas. Personal butlers escort guests to their rooms and give tips on life at Lhasa's 3,600-metre altitude. Guests are told not to shower on their first day, since hot water is believed by the Chinese to open up blood vessels and suck oxygen away from the brain. Each room, meanwhile, is equipped with oxygen tanks, just in case.

Downstairs there is a spa, a swimming pool, a restaurant boasting Cantonese and Sichuan delicacies, including yak meat, and a wine bar with hundreds of bottles specially flown in, including Château Lafite-Rothschild. Any guests wanting to taste "more basic Tibetan fare, such as yak butter and boiled noodles" will have to leave the premises, the hotel's website flatly states.

Tourism is now responsible for almost 15 per cent of Tibet's economy and more than six million tourists visited last year. Four more five-star hotels, including a Shangri-La and an Intercontinental, are to open in the next four years. Beijing is planning to introduce a luxurious train service to Tibet, with tickets costing as much as $9,000 per person.

I just spent the last six months or so planning a trip to Tibet, though the St Regis wasn't on our itinerary. A trip to Tibet isn't easy, not like getting on a plane and flying to Bamako, renting a jeep with a driver and going on an excursion through Mali's Dogon country and then on to Timbuktu. China makes it a lot more difficult-- and expensive. But in the end-- after lots of hassle and lots of weighing of conflicting moral perspectives-- it was all set. Then a few weeks ago, I got an e-mail that all foreign visas were canceled for the period I was planning to be there in June and July. They don't tell you why. But we knew.

There's been some trouble in paradise; the natives are restless. And the Chinese are cracking down again. Journalists are already banned from Tibet and they don't want any tourists there to bear witness to their brutality. For one thing, Beijing's nemesis, the Dalai Lama, has formally ceded any political role. The Dalai Lama will still be Tibet's spiritual and religious leader and a symbol of national unity but the Tibetan exiles' parliament has elected a Harvard scholar, Lobsang Sangay, to be the head of government (prime minister) based in Dharamshala, India.

Although the Dalai Lama will retain the more significant role of spiritual leader and will still be influential when it comes to major policy-making decisions, the transition will make Sangay a far more prominent figure than his predecessor as prime minister.

The Dalai signed amendments to the constitution of the Tibetan government-in-exile at the weekend to formally cede his political role. ...The Dalai Lama's political successor represents a major shift from the historic dominance of Tibetan politics by older religious figures.

The spiritual leader's move is part of an effort to strengthen the Tibetan movement's democratic structure so it can guide the movement following his death.

But his former membership of the pro-independence Tibetan Youth Congress has fueled speculation he may take a more radical stance and embolden the political strategy of Tibetan exiles toward China.

Beijing considers the Dalai Lama as a separatist bent on fomenting unrest in his homeland.

By late this month expect to hear more unconfirmable rumors about more oppression in Tibet.
Posted by DownWithTyranny at 11:00 AM

Hi, I agree with you. Really this blog is very informative.
Tibet tour