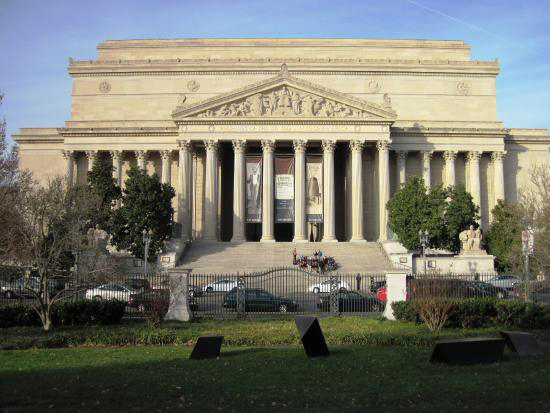 The great John Russell Pope's National Archives Building (1931-35), one of the landmarks mentioned in Francis Morrone's description for tomorrow's "Monumental Washington in the 1930s and 1940s" tour for the National Civic Art Society

As long-time DWT readers may recall, Howie is my oldest friend in terms of continuous service -- dating back to the 9th grade at the James Madison HS Annex on the top floor of a public school way the hell on the other side of Nostrand Avenue in Brooklyn. Long-time readers will also have heard more than once from both of us about our 9th-grade English teacher, Mr. Fulmer, one of the great influences on both our lives. Mr.Fulmer was wont to say pithy things like "In a thousand years we'll all be dead, and all that will matter is our record of truth and beauty," or to point out helpfully, whenever a hapless student would say unthinkingly, "I think that . . . .," that "That's not thinking."

Now you may think, especially if you're not conversant with the math that includes our ages, that 9th-grade isn't going back all that far as friendships go. Certainly not among the kids I encountered growing up, when my family seemed to move every couple of years (if not oftener), either within cities or, a couple of times, from city to city, so that every couple of years (if not oftener) I found myself standing alone on the playground of a new school among kids who'd been going to school together their whole lives.

Still, from this vantage point of antiquity, a continuous friendship dating back to the 9th grade and Mr. Fulmer counts for something. Warning: You don't want to get him started on our 10th-grade English teacher, Miss Kliegman, who still comes up fairly regularly in our conversations. And so maybe it's not entirely beside the point that you encounter us both, all these years later, in the act of shoving words around.

Our more obvious connection, which long-time readers will also have noted, is political and worldviewish. For all our differences, I am still regularly startled by how similarly we respond to Stuff That Happens Out There in the World -- the way our attention tends to be caught by the same events and our responses tend to be so similar.

Possibly factoring into the above (or possibly not) is that Howie is the only friend I've ever had who's as geography- and map-obsessed as I am. Again, our geographical, er, styles are different. He's the one who, as he has chronicled here a number of times, set out one summer for the Pacific island kingdom of Tonga. No, he didn't get there, but for a high school kid getting across our native continent was no small deal. Not to mention that you would never in a lifetime find me doing any "setting out for" of that sort.

And again, long-time readers will have glimpsed that difference in our recorded travel adventures. Howie is the one who, with his grueling health crisis still clearly visible in the rear-view mirror, planned and executed a several-weeks' expedition to Russia with a side swing to Azerbaijan. (I wish you could have heard the hair-raising stories of just the adventures in visa-hunting he and especially his friend and frequent travel companion Roland underwent for this trip.)

Whereas my traveling is done mostly via armchair -- most happily in the happy company of Michael Palin on DVD. And, of course, the urban gadding that has become my latter-years evening and weekend preoccupation -- most always in day-trip form, and almost invariably within the geographic boundaries of NYC.

Which is a prelude to explaining why I'm not tackling one of my customary "serious" blog topics (that's right, the depredations of Next Food Network Star will have to await another occasion) today, as I prepare for a journey that will respect my "day trip" boundary but not the geographic one. 'Cause I'm busting out of the Greater NYC area -- all the way to Our Nation's Capital. And I'm doing it on a 3am train out of Penn Station. (Shudder.)

True, the impetus is local-ish. Which is to say that one of my most cherished walking-tour leaders, Francis Morrone, mentioned not long ago during a Municipal Art Society tour that he was going to be doing a tour in Washington on July 9. He didn't say any more, and I didn't ask, but after letting the thing percolate in my head awhile, I finally decided to try to track it down online, and track it down I did -- to the final event in a series, "Classical Architecture, Classical Values," offered by the National Civic Art Society:

V. Monumental Washington in the 1930s and 1940s. Classicism in the era of Modernism.

We will explore works from the 1930s and 1940s--when the Modern Movement was in the ascendant--by such architects as Arthur Brown Jr., York and Sawyer, William Adams Delano, Milton Medary, and especially John Russell Pope (National Gallery, National Archives, Jefferson Memorial), with a big tip of the hat to the relatively unsung Otto Eggers and Daniel Higgins. Along the way we'll note other things, including, for context, later works by I.M.Pei and Partners and Pei Cobb Freed. Please note that this is an outdoor tour only. We'll leave the glorious interiors en route for another day.

The tour meets at 10 AM at the intersection of Constitution Ave. NW and 6th St. NW.

Again, it took me a bit of time to process this information, and discover that I had a conflict with a Brooklyn Brainery event I'd already registered for, "Blintzes, Malaysian Peanut Pancakes, and the Many Faces of Crepes" with Jonathan Soma (half of the great Masters of Social Gastronomy team, with Sarah Lohman; they have a slew of interesting-looking events planned for July and August), part of Soma's BB Summer of Pancakes series. However, as I'm a bit embarrassed to note, I quickly recalled that Brooklyn Brainery, in addition to offering interesting programs at eye-catchingly low prices, actually allows you to cancel events, and I did just that. (I just checked, and tomorrow's class is sold out, so maybe the Brooklyn Brainery folks aren't as naive as we might think, allowing registrants to cancel with enough advance notice. I'm delighted to see that my ruthlessly abandoned slot hasn't gone to waste! And I've still got my place on the 19th for Soma's "Going All-in on American Pancakes," which I see is also sold out. I don't plan on canceling that one.)

From there the details fell into place in rapid order. I had no trouble booking my spot for Francis's tour.(I guess the D.C. folks don't know about him. In NYC, that tour would probably have been sold out within days of being announced), for a measly 15 smackers. Of course adding in carfare hiked the total trip cost a bit: $74.80 (advance-purchase senior fare) for a train down, then a mere $23 for one of those cheap-cheap Chinatown-bassd buses back in the evening. I've taken the cheap-cheap bus before, and would have done so for the trip down if there's been a bus that would enable me to get to the tour meeting point by 10am, but there wasn't -- not even close.

And even the Amtrak scheduling was tricky. There's a 6am train that's scheduled to arrive in Union Station at 9:30am, and judging by the map, that should leave me enough time to make my tour -- that is, assuming I have such faith in Amtrak's on-time performance. Not to mention the consideration that I only theoretically know how to get from my Point A to Point B, and I would spend every second of every minute today all the way through boarding and then all the way on train obsessing over the time. So I swallowed hard and instead of booking the 6am train pulled the trigger for the 3am one, due into Union Station at 6:30am. Meaning that, once I'm on the train, nothing short of a derailment (a possibility one can't ever entirely discount) should prevent me from making the rendezvous with Francis. (Who, incidentally, has no idea that I'll be there. I've done at least one MAS tour with him since I made all these plans, and thought I would find a way to drop it into conversation, but I didn't. It should at least be interesting to note his response to seeing me amidst the tour group.

So today, in addition to planning everything around the 3am train departure, I'm occupied with finishing my research and resource planning, including printing up all sorts of Google maps, including locations of local ATMs of my bank and gym branches that my membership card should get me into. (In addition to not wanting to skip a day at the gym, I'm inclined to have some possible indoor activities in my arsenal. Not at all to my surprise, thunderstorms are predicted for tomorrow.) I thought I could piggyback some serious apartment decluttering in the form of a frantic hunt for my buried D.C. street atlas and aging Time Out guide, but wouldn't you know, I found both of them almost as soon as I started looking. Of all the luck!)

So you'll see why I don't have time today to prattle on about, say, the Supreme Court, or the wide-screen version of Gilmore Girls I'm now a mere two episodes away from finishing on UP. What's more, I"ve got another crossing-state-lines day trip planned for next month, built around an event my college alumni people have planned at Connecticut's Mystic Seaport, which I've heard about much of my life but have never visited. Highlighting the festivities, one of our distinguished English professors will be offering a presentation on "The Myth and Legend of Moby Dick," so part of my adventure will be finally reading Moby-Dick. (Yes, I was supposed to have read an abridged version -- in, I think, Miss Kliegman's 10th-grade English class. But there are a lot of things I was supposed to have read that I haven't.)