As Mitch Waxman prepares to tramp around his beloved Newtown Creek, we look at a blogpost that shows what blogposts can do 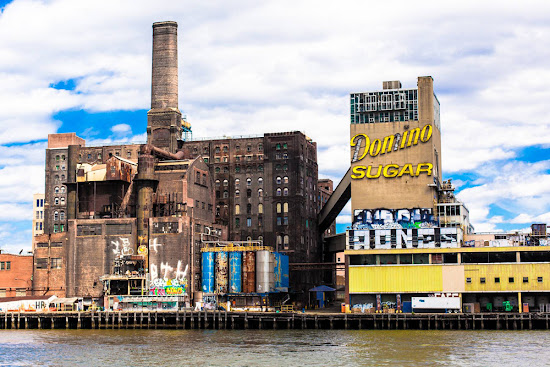 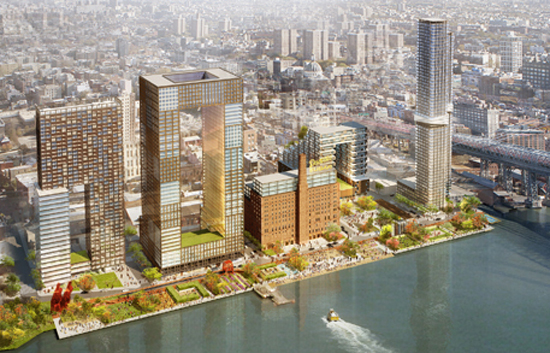 As recently as two years ago, when binary_bob took the top photo, posted on Reddit (click to enlarge), the once-mighty but long-doomed-following-abandonment Domino Sugar plant on Brooklyn's once-industrial waterfront still retained a large measure of its grandeur. The lower image, is a rendering of the redevelopment plan (click to enlarge), courtesy of SHoP Architects, looking east and slightly southward, with the Williamsburg Bridge at the right. Quick: Can you find the refinery building itself?

"One cannot help but drop his jaw whenever the former Havemeyer or Domino Sugar plant site comes into view. It is being redeveloped as a residential structure – more luxury condos for the children of the rich to dwell within. The question of what will happen to these structures when NYC slides backwards into an era of degeneracy and decay is one few ask."

All week I've been meaning to talk a bit about our pal Mitch Waxman's Monday Newtown Pentacle post, "last stages," which seems to me a textbook-worthy demonstration of what the blog format can do when it's crackling. A blogpost, after all, has two fundamental resources: pictures and words. (Videos seem to me for the most part less a resource than a brain-draining abomination.) And Mitch has a way with both. You may recall that he's a compulsive NYC urban wanderer and photographer with a deep connection to place and time.

In terms of "place," he's based in Astoria, Queens, and along the way has developed a special connection to legendarily pollluted Newtown Creek, which forms the western part of the boundary between the boroughs of Brooklyn and Queens, and which once was the industrial heartland not just of the New York City but of the U.S.A., which after all is how it got so polluted. So before we get to that blogpost, I thought I would mention that there are two immediately upcoming opportunities to take advantage of his obsession with his "beloved" Newtown Creek for anyone who might be in the New York City area tomorrow (August 2 -- kind of late notice on this one, I know; sorry!) and/or next Saturday (August 8), when Mitch is doing two of his signature Newtown Creek-related tours: 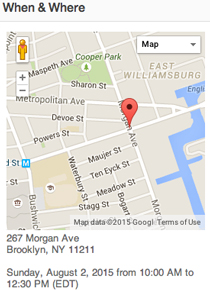 Join Newtown Creek Alliance Historian Mitch Waxman for walk through the industrial heartlands of New York City and along the Newtown Creek. Following the currently undefended border of Brooklyn and Queens, we will be exploring the colonial, industrial, and environmental history of the borderland communities. We will encounter century old movable bridges, visit the remains of a 19th century highway, and explore two of the lesser known tributaries of the troubled Newtown Creek watershed. For the vulgarly curious, Conrad Wissell's Dead Animal and Night Soil wharf will be described.

Meet up at the corner of Grand street and Morgan Avenue in Brooklyn. Map: https://goo.gl/psdEEO The L train stops nearby at Bushwick Avenue and Grand Street, and the Q54 and Q59 bus lines stop nearby as well. Check MTA.info the morning of for last minute transit changes.

Be prepared for rough terrain and possible heavy truck traffic. Dress and pack appropriately for hiking and hot weather. Closed-toe shoes are highly recommended. Bathroom opportunities will be found only at the start of the walk.

In 13 steps, Newtown Creek Alliance Historian Mitch Waxman will be showing us the then and now of Dutch Kills tributary, once known as the "workshop of the United States."

A central maritime artery of Long Island City, Dutch Kills is surrounded by hundreds of factory buildings, titan rail yards, and crossed by century old bridges - and it's found just a few blocks away from Queens Plaza. During this three hour tour, we will cover three miles of Brooklyn and Queens to see where the industrial revolution actually happened. Bring your camera, as the tour will be revealing an incredible landscape along this section of the troubled Newtown Creek Watershed.

Be prepared for rough terrain and possible heavy truck traffic. Dress and pack appropriately for hiking and for weather. Closed-toe shoes are highly recommended. Bathroom opportunities will be found only at the start of the walk.

Meet up at the Albert E. Short Triangle park found at the corner of Jackson Avenue and 23rd Street in Long Island City, Queens. This is the Court Square MTA station, and served by the 7, G, and M lines. Additionally, the Q39 and B62 buses have nearby stops. Drivers are encouraged to leave their vehicles near the Pulaski Bridge in either Greenpoint or Long Island City.


A "QUINTESSENTIALLY MITCH" TAKE ON THE
EMERGING BROOKLYN-QUEENS WATERFRONT

Now about that blogpost. I was talking a moment ago about Mitch's sense of "place, and for this post, our pal Mitch Waxman he was ensconced in one of his recently favorite places for wandering, the East River Ferry, taking some great shots of what's left of the once-teeming working waterfront of New York City's East River. Note that he hastens to clarify what he means by "a working waterfront," which is to say one "that is engaged in the production of something other than artisanal pickles."

However, he notes that observing "the modern day East River bums me out." And the quote at the top of this post is Mitch deep in bumnation, contemplating the finally-taking-place transformation of the Domino Sugar plant in Williamsburg, just north of the Williamsburg Bridge. Here are two photos he took, one with the bridge and one without (click to enlarge): 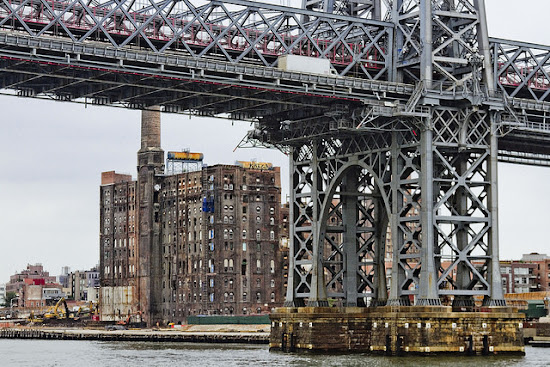 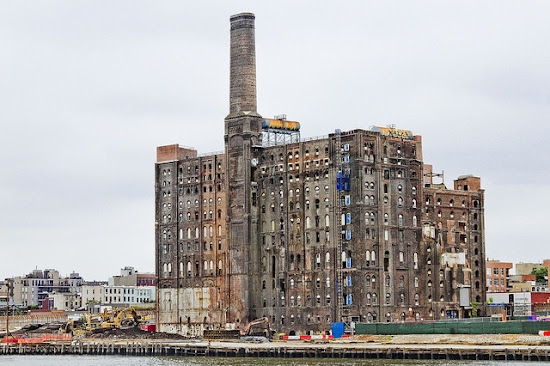 Not long ago, Open House New York -- as part of a new series, "Projects in Planning," which aims to "explore the design and planning process of a single project during its early stages of development," to give us a window on the process of a major development project still in the development stage -- offered members a presentation by Vishaan Chakrabarti of SHoP Architects on the "Domino Sugar Refinery Redevelopment" (see the photo above), for which redevelopment plans have been kicking around almost since the plant was shut down in 2004 Here was the description (scroll way down, to April 8, in the "Recent Programs" section of the OHNY programs page):


OHNY members are invited to a presentation of SHoP Architects' master plan for the redevelopment of Brooklyn's iconic Domino Sugar Refinery. With a renovated refinery building as its "nerve center," the project is expected to create a 24/7 mix of creative office space, market-rate and affordable housing, retail shops, community facilities, and public open spaces. The distinctive buildings, which will create a new skyline for Brooklyn, are designed to allow light and air to penetrate through the site into the neighborhood beyond.

Now Vishaan Chakrabarti is one heckuva presentation presenter. After all, while in this instance he was talking to a bunch of people whose only standing came from having ponied up OHNY's modest annual membership fee, he's accustomed to giving presentations to people who are contemplating spending zillions of dollars, or perhaps have the power to turn thumbs up or down on other people's expenditure of said zillions of dollars. And as he described the process that had brought the project to its present state, he persuaded me, at least, that as large-scale development projects go, this one -- which includes an array of new buildings as well as open spaces surrounding the old plant itself (which is one of three buildings on the site that have landmark protection) -- has been planned with unusual sensitivity to the site's history and to the current needs of the nearby community.

Nevertheless, it looks to be a blight on the waterfront (don't you just love that "doughnut hole" building?), and it doesn't matter, because in the end it all comes down to what it all always had to come down to: the triumph of money. Williamsburg, after all, is now NYC's hippest and perhaps also hottest neighborhood, and the whole point of hipness, at least from the commercial standpoint, and it's hard to think of any other standpoint that can be said to matter, is to create hotness, in the real-estate sense, of course. So if the shores of Long Island City (Queens) and Greenpoint (Williamsburg's Brooklyn neighbor to the north) are to be lined with sky-high and sky-high-priced giant glass boxes, and they are, you can be sure that Williamsburg is getting them even glassier and boxier. (The one concession that city has extracted from developers is parkfront development along the riverfront proper and free access to it, which is certainly very different from the waterfront in its old industrial stage.)


Williamsburg is officially lost as a point of interest for me. Bland boxes of steel and glass will extend all along the East River soon enough, stretching from the former industrial heartland once called “America’s Workshop” in Long Island City all the way through the Gold Coast of North Brooklyn to the Williamsburg Bridge.


BUT HE ADDS "QUINTESSENTIALLY MITCH" TOUCHES

First, speaking of this span of high-priced glass-and-steel boxes rising above the Brooklyn-Queens waterfront north of the Williamsburg Bridge, he notes:


Criminals are already beginning to focus their attentions on this area, just as they did in the age of industry. Why? Because predators go where the prey is.

Then he adds another characteristic touch -- a touch, one might say, of bumnation: "It’s cliché to even comment on it anymore, one realizes."

Except that Mitch has a comment on this redevelopment of the Domino site "as a residential structure -- more luxury condos for the children of the rich to dwell within."


The question of what will happen to these structures when NYC slides backwards into an era of degeneracy and decay is one few ask.

Any historian will tell you that it’s a cyclical thing here in the megalopolis, one that flips back and forth on a roughly forty year cycle which can be directly correlated to rates of crime, and that the City’s current upswing began in the late 1990’s – reversing a decline process that started shortly after the Second World War.

Rich people tend to move away from the City center when things get hairy. The rest of us are kind of stuck here.

This, I think, is sweet. Finally, here's Mitch's sendoff for this post:


Scenes long familiar, lost. The wilderness of the oligarchs is upon us, and deep in the woods – wolves howl to celebrate and delight. The nobles will be safe in their keeps, but the peasants – we’re on our own. 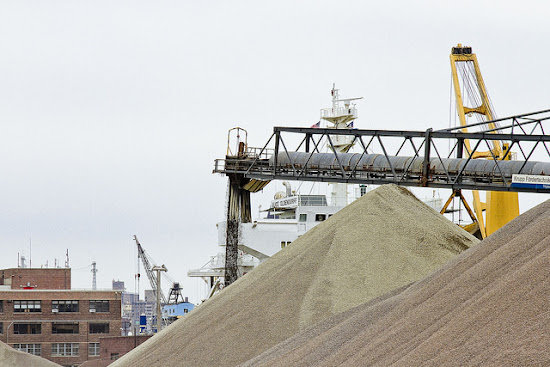 On his ferry ride, Mitch observed "the Alice Oldendorf bulk cargo ship at work, making a delivery to a concrete plant at the Brooklyn Navy Yard. The ship hosts a series of cranes and conveyors which unload her holds, producing the cyclopean mounds of sand and gravel witnessed above." (Again, click to enlarge.)