Urban Gadabout: Check out the Spring 2015 schedule of Justin Ferate and Wolfe Walkers 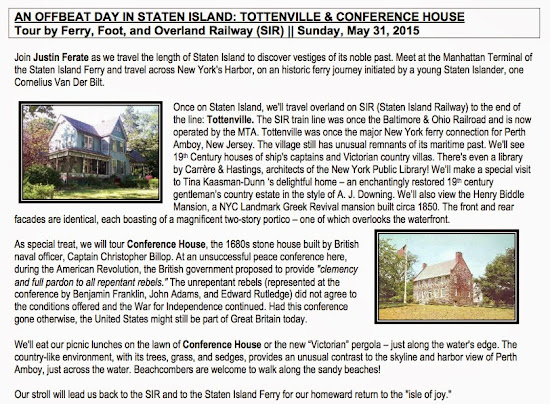 This time Justin's hardy Tottenville explorers will get inside Conference House. (Click to enlarge, and download a pdf of the Wolfe Walkers Spring 2015 Brochure here.)

Just about every time I take a walking tour (or bus-and-walking tour or train-and-walking tour) with the amazing Justin Ferate, I have occasion to tell the story of the first tour I ever did with Justin, back when he still occasionally did tours for the Municipal Art Society. It was a pretty much all-day affair to Tottenville, at the southern edge of Staten Island, and it was, well, amazing. As I always say, as soon as Justin got us grouped on the Staten Island Ferry at the Manhattan terminal, he started talking, and all those hours later when we arrived back at the end of the ferry terminal terminus of the Staten Island Railway, he came up for breath.

The weather was dismal, raining on and off, with mist so heavy that when we got to Conference House Park, at the southern tip of the island, we could barely make out Perth Amboy, New Jersey, across the Arthur Kill. Nevertheless, the whole day was magical, and I was inspired to return to Tottenville on my own. And of course I was inspired to take as many tours with Justin as I've been able to.

Nowadays those tours are mostly in spring and fall seasons of the Wolfe Walkers, the venerable band of urban gadders originally gathered together by Prof. Gerard Wolfe when he was teaching at NYU. As Justin noted last year, though, he sudenly realized that he has now been doing the Wolfe Walkers walks longer than Gerard. 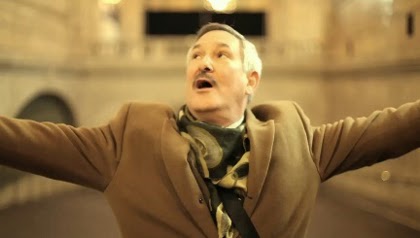 And in the brand-new Spring 2015 Brochure that Justin just passed along, I see that he's doing a new verson of the Tottenville expedition on May 31, which I would have signed up for in a heartbeat if I didn't have a schedule conflict. (This time the group is promised access to the inside Conference House.) I had a couple of other schedule conflicts with dates on the Spring 2015 schedule, but one of them I'm blowing off, in order to do the ever-so-Edith Whartonesque Summer Mansions of Astoria, Queens. (I've been reading a lot of Edith Wharton, including the Old New York novellas, for which the tour should practically be a required field trip. I had my registration form and check -- for both bus tours, the "Titanic Memorial Tour," "Summer Mansions of Astoria," and "Kleindeutschland" -- sitting in the mailbox across the street in time for the next pickup after I received the brochure.

Another Spring Season awaits! Responding to several requests, we are offering a walk of Spiritual Sites along Central Park West [Sunday, April 12] that will include (among other locations) a private tour of Congregation Shearith Israel Synagogue. Three tours celebrate the New York waterfront: Brooklyn Bridge and Brooklyn Heights with a tour of Plymouth Church [Sunday, April 26]; Summer Mansions of Astoria, Queens [Saturday, May 9]; and the charming waterfront village of Tottenville, Staten Island [Sunday, May 31] -- including a tour of Conference House, where attempts were made to resolve the issues of the American Revolution. (Needless to say, the Conference was unsuccessful.)

We’ll explore the history and remnants of “Kleindeutschland” or “Little Germany” on the Lower East Side [Saturday, May 16]. On our bus trip to Franklin Delano Roosevelt’s Hyde Park [Sunday, June 7], we’ll travel to Springwood, the Roosevelt Mansion. A special treat will be a visit to Eleanor Roosevelt’s unusual snuggery, Val-Kill Cottage as well as the FDR Presidential Library. The Hyde Park trip will also include a tour of the Frederick Vanderbilt Mansion, designed by McKim, Mead and White.

A very exciting offering this year will be a day of 17th and 18th Century Stone Houses in the towns of New Paltz and Hurley [Saturday, July 11]. The New Paltz houses form a National Landmark district and the houses are maintained in a protected museum environment. The houses of Hurley date back as far back as 300 years and are currently residences today. This is the only day of the year that these private homes are opened for public visitation. A rare treat!

Come join us for another exciting season!

In addition to the above tours, all led by Justin, there's a Saturday-evening Titanic Memorial Tour (April 18) led by Dave Gardner, "a gold member of the Titanic Historical Society."

And while you're on Justin's "Tours of the City" website take a look around, and if you have any interest in what's going on in and around New York, you should sign up for Justin's mailing list, which will land you an ongoing cornucopia of information. As I always say, I always read Justin's pass-alongs, and have been tipped to all manner of fascinations.