Stepping back into NYC's "club era" -- the Yale Club today, the University Club in March 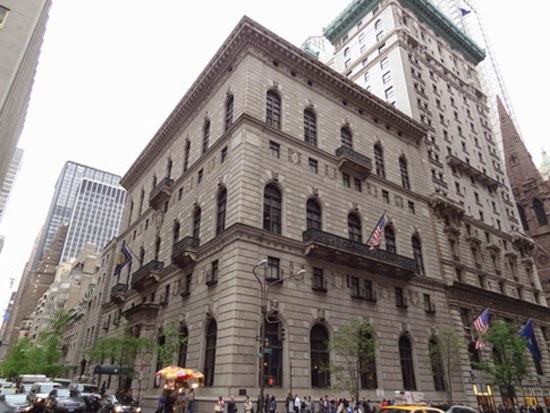 This morning I made sure to get enough of my day's posts posted so that I could go out and play, notwithstanding the arctic weather here in the Big Apple. Today that meant a special of the historic "club" districts of Midtown Manhattan, including a visit to the largest of them all, the Yale Club (which survives in part by sharing its facilities with a bunch of other clubs, like that of my alma mater, I was surprised to be reminded).

Matt Postal has been doing a series of tours for the Municipal Art Society of some of the surviving clubs, namely those that have responded at all positively to his entreaties. He has explained that when he was attending graduate school at the City University of New York in the '90s, he was involved in a massive project into the clubs built during the great era of clubs in Midtown, the later part of the 19th century and the early part of the 20th. It was a natural project for the CUNY Grad Center when it was located on the block north of the New York Public LIbrary, on 42nd Street between Fifth and Sixth Avenues, a virtual stone's throw from the graet club blocks -- 43rd and 44th Streets between Sixth and Vanderbilt Avenues and -- opposite the south side of the library and its neighbor to the west, Bryant Park, 40th Street between Fifth and Sixth Avenues. But before the project could be completed and brought to whatever form it might have taken, the grad center moved -- not that far, to its present location in the gorgeous, landmarked former B. Altman building at Fifth Avenue and 34th Street, but far enough that the "club district" was now judged to be out-of-neighborhood. The project was shelved, leaving Matt with all that work expended and all those reams of files.

On earlier MAS tours with Matt, I've gotten to see the inside of the Players Club (on Gramercy Park South) and the Century Association (on 43rd Street just west of Fifth Avenue). A number of the city's most prestigious architects designed those club buildings, and setting foot inside them also carries the feeling of stepping into another era.

On a recent MAS tour with Francis Morrone, part of a series exploring the "side streets" of Midtown, our group had spent time at the corner of Fifth Avenue and 54th Street, onl partly sheltered from the rain, looking at the extraordinary pile of a building on the northwest corner, McKim, Mead and White's University Club of 1899.

Which gave Francis the opportunity to mention that on March 3rd he will be giving this year's 14th Annual McKim Lecture, co-presented by the Institute for Classical Architecture and Art and the University Club (in the form of the 1 West 54th Street Association), in the club itself. It was a date he suggested we might mark on our calendars, though he warned that they charge a really lot of money.

I actually remembered to do some Web searching, and was able to confirm the March 3rd date, but for details and reservations In was instructed to check back later. Perhaps inspired by the upcoming Yale Club tour with Matt P, I remembered to check back, and sure enough the full information is now available, including this:


The topic of the lecture will be “The City Beautiful and the Urban Landscape in America.” The talk will explore the movement to beautify America’s cities in the late 19th and early 20th centuries, the impact and legacy of that movement, its relevance today, and the many misconceptions about it (including that of Jane Jacobs). All of this will be discussed with specific reference to the contributions of McKim, Mead and White.

I know from my recent experience of (finally) reading Jane Jacobs's storied Death and Life of Great American Cities, and from doing bunches of tours with Francis where her writings have come up, including one last August devoted specifically to "Then and Now: The West Village of Jane Jacobs," that he's one of the few people who invoke her work who's actually familiar with what she wrote. So I'm especially psyched for the promised corrective to her view of the City Beautiful movement, which could most politely be described as scathing.

Beyond which, in my experience Francis takes his public presentations very seriously. Like when his latest book, Guide to New York City Urban Landscapes (written with Robin Lynn), had a festive do of a public book-launch party in the historic chapel of Green-Wood Cemetery, at a time when many authors would coast on the labors of book-writing now comfortably behind them, Francis seemed to have devoted as much effort to the presentation he gave as most people would devote to actually writing a damned book. The way he tied Green-Wood itself into the first of the successive eras of NYC urban landscapes it had a lot to do with settiing in motion (starting with two of the city's still-greatest urban landscapes, Calvert Vaux and Frederick Law Olmsted's Central Park and Prospect Park) was, in a word, masterful.

Beyond that, there's the sheer thrill of penetrating the mighty exterior of the University Club. Here are a few paragraphs from a post by Scott on the IWALKED Audio Tours website:


As it is likely that most of us will never see the insides of the University Club let me share what I have been able to learn of its interiors from my research. The highlight of the building is the library on the second floor which you can sometimes get a glimpse into from street level. The library is said to contain vast vault ceilings with murals painted atop its ceiling by Henry Siddons Mowbray that emulate the Vatican Apartments. Also amongst the interior is an extensive art collection, including a series of portraits by Gilbert Stuart, and a series of swimming pools allowable for usage with either swimming or birthday suits (at least in the male-only pool).

Speaking of male-only, the University Club underwent an overhaul of its membership policy in 1997 due to the passage of the New York City Public Law 63. Public Law 63 required all fee-collecting clubs with members greater than 400 (of which the University Club has over 4,000 members) to begin allowing the membership of women, or else the club would be forced to alter its charter.

The University Club has been located within this nine-story Italian High Renaissance Revival building since 1899. The Club which took on a series of temporary homes since its founding acquired a lot that was formerly owned by St. Luke’s Hospital to build on this site. They then hired the famed architectural firm of McKim, Mead and White to construct themselves new quarters for the sum of $1 million. McKim, Mead and White’s unique design integrates pink Milford granite on its exterior, along with a series of twenty-five feet columns that grace each side of the front entrance. Also integrated above each of the building’s windows are crests that are representative of various prominent universities. Perhaps the most intriguing element, however, is the deceptive appearance of the building’s exterior. By glancing at the outside of the building it seems apparent that there are no more than three levels, when in actuality the interior maintains nine.

You'll notice that phrase of Scott's, "as it is likely that most of us will never see the insides of the University Club," well, that's what I was thinking too, that day when we stood in the rain looking at the building's exterior. Well, I put that all together, swallowed hard, and -- reminding myself that a good part of the money goes to the worthy causes represented by the prsenting institutions -- shelled out the $75 they're asking for just the cocktail reception preceding the lecture and the lecture itself. That'll get me inside the building and into Francis's lecture. I didn't give serious consideration to the higher-priced option, which adds on a dinner following the lecture, at a jacked-up total of $150. It occurred to me afterward that maybe I should have really gone hog-wild, if only to see the dining facilities of the club.

I know enough from my club tours with Matt to know that the dining facilities of these places are a key feature of their design. Maybe I should have thought of the extra $75 as a fee for on-site inspection, with the meal as an added bonus. I'm not sure I could have sold myself on that, though, and anyway it's done, though I suspect an upgrade wouldn't be entirely impossible. Probably if I called the phone number listed for reservations, and mentioned that I've already registered for the recpetion and lecture, and wondered if I might still be able to tack on the dinner. . . . Oh no, now I've planted a bug in my head!

These are, of course, decisions each of us has to make for him/herself. And I just thought some of you might want to know about this. There aren't a lot of people I'd seriously consider shelling out the basic $75 for, but put Francis in a package with the University Club itself, and I'm already kind of glad I overcame my habitual cheapness.


For information about current and future Municipal Art Society walking tours, go to the MAS website, mas.org, and click on "Tours."