Urban Gadabout: New from the people who brought us "Inside the Apple" -- "Footprints in New York" 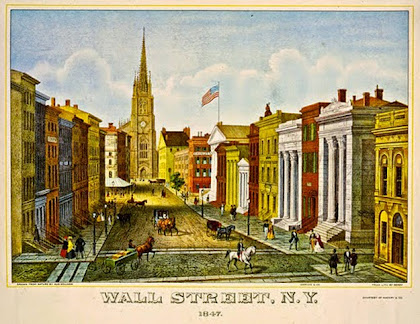 An 1847 view up Wall Streeet to the third (and currrent) Trinity Church, completed just the year before, distributed as last week's "Postcard Thursday" offering from the Inside the Apple blog. [Click to enlarge.] 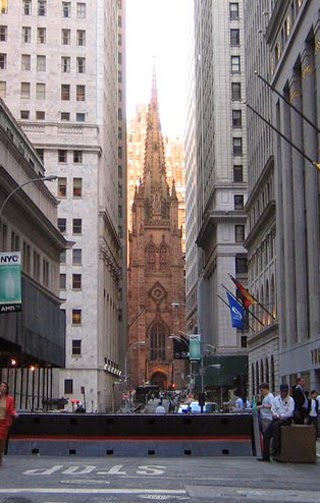 Last week's "Postcard Thursday" e-mail from the Inside the Apple team of Michelle and James Nevius (viewable as a blogpost here) had special significance for me, even though we were told that it's "not, technically, a postcard." The view at right gives some feeling of what it looks like today. It's a streetscape I haunt virtually every day, and two of the 1847 view's most conspicuous features still stand in forms not wildly different from what's depicted here. The view enlarges surprisingly well; I've tacked it up, with the relevant text, on the outside of my cubicle at work.

Looking west up Wall Street we see the then-new third Trinity Church, designed by Richard Upjohn, the one that still stands today -- and as you begin to investigate the history of New York City, you quickly discover that it's woven around Trinity Church, the breathing heart of Episcopal New York, which is to say the spiritual home of NYC money.

(The first Trinity, built in 1698, was destroyed in the great fire of 1776, which destroyed so much of the New York City of that time, still huddled at the southern tip of Manhattan Island. The second Trinity, built in 1788-90, "was torn down after being weakened by severe snows during the winter of 1838–39," per Wikipedia.)

The building with the flag on top is what we know as Federal Hall National Memorial, the successor to the building, the actual Federal Hall, where George Washington was inaugurated. Since I work half a block away, and my gym in fact is right next door to FHNM, I can vouch for the fact that FHNM is a site beloved of tourists, in even the raunchiest weather, partly because diagonally opposite it is the site of the New York Stock Exchange.

Behind FHNM (as we're viewing it), Nassau Street runs to the right (north) and Broad Street runs to the left (south). The area has been associated with stock trading at least since May 17, 1792, when 24 stockbrokerrs gathered outside 68 Wall Street, farther east, under a buttonwood tree, and signed the Buttonwood Agreement, which laid the groundwork for the New York Stock and Exchange Board, later shortened to just the New York Stock Exchange. The site at the southwest corner of Wall and Broad Streets now houses a cluster of NYSE buildings, including the landmark 1903 headquarters at 18 Broad Street.

Since I work in the adjoining building, 20 Broad, and in fact my gym is in the building directly to the east of FHNM, this 1847 view has had me mesmerized it since the Inside the Apple team of Michelle and James Nevius circulated it last week. Their "Postcard Thursday" offerings are one of the highlights of my week, and you never know what may turn up on the Inside the Apple blog.

Michelle and James's Inside the Apple is one of the great books about New York City, breaking down many of the city's historic areas geographically but telling their story historically, since the history of any site is the story of the people who lived, worked, and/or played there over time -- in most cases many layers of time, since nearly every part of the city has been undergoing change almost from the very beginning. (There are splendid links to tie people and places together.)

I wrote about Inside the Apple on July 3, 2011, after I had the considerable pleasure of doing one of the Neviuses' occasional public walking tours (most of their tours are arranged directly with clients) -- this one with James, of "Revolutionary New York." As I wrote at the time: "In an introductory note, Michelle and James explain": 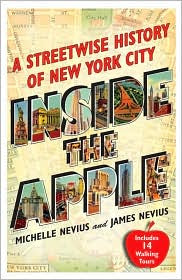 The goal of Inside the Apple is to give you a different pathway into the city's long and rich history. While there are many books that focus on New York's notable events and famous people, ours is instead organized around the places where those events took place. By grounding the narrative in sites that you can see and visit, we provide concrete, tangible, connections between the city of today and its intriguing past.

People have long tried to answer the question: What makes New York unique? We feel the answer is deceptively simple: more than any other American city, it is primarily experienced on foot. . . .

. . . because today I got my pre-ordered copy of Michelle and James's new book, Footprints in New York: Tracing the Lives of Four Centuries of New Yorkers, which they've been previewing on the Inside the Apple blog for months. The new book is a further step in connecting the geography of the city with the stories of the people who have been connected to places. 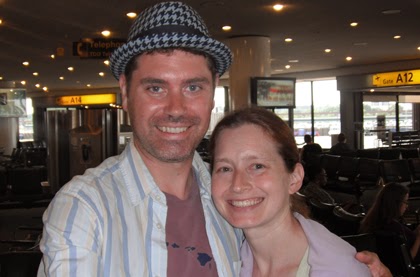 As Michelle and James explain in the preface:


The concept of this book is simple: We wanted to build a time machine.

Since our grasp of particle physics is weak, we decided on the next best thing, to tell the story of New York City by having each chapter transport the reader to a distinct historical era, from the Dutch village of New Amsterdam to the modern city of skyscrapers that's been built along the very streets the city's Dutch founders once walked.

As our goal is to, literally, walk in the footsteps of the New Yorkers who've come before us, each chapter is linked to a person (or, sometimes, a group of people) whose story is emblematic of that era. Some people -- like Edgar Allan Poe and Abraham Lincoln -- are universally famous. Others, such as Gertrude Tredwell or Stephen DeLancey, will only be famliar to a few. But all of them played an important role in the story of the city.


New York is so chock-full of intriguing sites that it's a historian's dream. We've been leading walking tours of the city for nearly fifteen years, and in that time we've searched out forgotten byways and journeyed to unexpected corners of the city. It's those places -- from the city's oldest house to a small synagogue on a stretch of Broadway that most people don't even know exists -- that paint a vivid portrait of New York. We talk about famous sites in these pages too, but we hope when you're reading about some of the more off-the-beaten-path sites, you may want to seek them out yourself.

The greatest joy of leading tours is the moment when a client -- often someone for whom history has always been dry recitations of names, dates, and battles -- makes that real, personal connection with the city of the past. It can happen in unexpected places -- a walk down the streets of Little Italy can evoke childhood memories. Examining gun placements in the old fort in Battery Park can suddenly illuminate the importance of the War of 1812 to someone who'd never before been able to get a handle on it. Simply walking from Battery Park to Soho -- the same path that Alexander Hamilton walked during the Revolution with his artillery company -- can do more to reveal the contours of the war for American independence than any textbook. It's our hope that the New York stories in these pages will uncover some of those hidden histories, too. 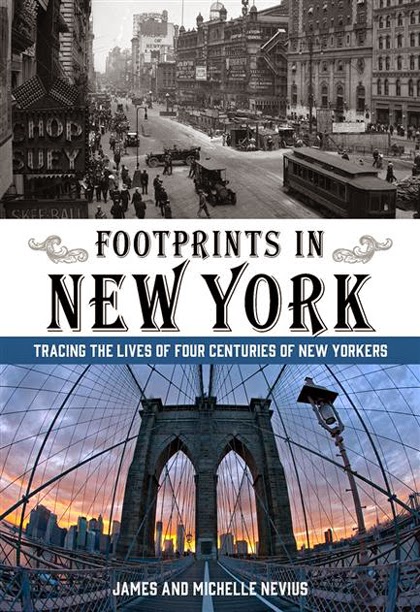 You can buy the book from your regular bookseller or via this link on the Inside the Apple website. For information about receiving Inside the Apple updates, or to contact Michelle and James, go to this webpage. Or subscribe to the e-mail list by simply sending an e-mail to info@insidetheapple.net with the word "SUBSCRIBE" in the subject line.