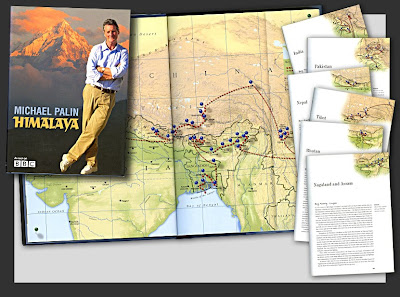 I've just finished watching the 2004 film of Michael P's epic 2003 journey through the Himalaya and surrounding regions. The map above should be intelligible enough (you should be able to click to enlarge it) to suggest the scope of the journey, except that the copy of the book covers over the early segments in Pakistan and India.

I've written about my excitement at rediscovering the early Michael Palin travel-trek series on British DVDs. (Even now that they're actually readily available in U.S. editions, the U.K. ones are still way cheaper.) Of course you have to have a multi system DVD player, but there's an advantage there as well: For HD, my Panasonics (I bought a second one during my recent medically induced hiatus) up-convert from the higher-lined PAL versions, and look pretty darned good on my first HD TV, another product of that hiatus.

And I had the new TV just in time to go back and rewatch the first episode or two of Michael's grand Himalaya series, where the scenery is so mind-boggling. I mean, the show starts in the Khyber Pass! I mean, I never dreamt I would ever see the Khyber pass, and now here it is (video below), with Michael P standing right there talking about it, on my own TV!

Confession: I got stalled with the Palin videos some time back, when I ran into Hemingway Adventure. Even if one doesn't share that "thing" for Hemingway that Michael is far from alone in possessing, you'd think that locales like Key West and late-revolutionary Cuba would be interesting enough in their own right to get me through. And maybe someday I'll go back and find them so, but as presented, as reflections of this or that part of Hemingway's journey through existence, they drove me crazy.

And in this case, the accompanying book didn't help, because it's still imbued with Michael's Hemingway "thing." I find that not many people, even Palin fans, know about or understand the books that have been written and published to supplement each of his travel series. The books, based on his obsessively detailed diaries, are his own re-creations of the making of the journeys. Naturally there's overlap with the edited TV series, but usually even when the same visit or interview is present in both film and book form, there's information or perspective from one that amplifies the other. And there's a great deal in the books that doesn't appear in the edited series.

When I finally restarted my Palin-viewing habit, with Sahara, I was surprised to find that I hadn't acquired the book -- I thought I had them all waiting for me. But I found a really gorgeous hard-cover copy dirt-cheap on Amazon, and had it in time to supplement my televiewings, still on my old 31-inch Panasonic CRT TV, of course. (And the hard-cover version is definitely a plus. I've got paperback versions of some of the others, but for Basil Pao's photos, you want the better reproduction of the hard-cover.)

And Sahara is a fabulous journey. I had seen parts of an episode or two of the series way back when on the Travel Channel, but not enough to make sense of it. The series encompasses a staggering range of terrains and cultures, starting north of the Sahara -- starting in Gibraltar, where happily for us Michael had never been, then proceeding by ferry from Algeciras across the Strait of Gibraltar to Morocco, then across the mountains and finally encountering the Sahara (it fascinated Michael that this vast little-known terrain existed so close to Europe), spending time with the exiled Polisario rebels from Western Sahara and on southward, then swinging east and finally heading north through Algeria and Libya before Michael revisited the once place he'd been before: Tunisia, where Life of Brian was filmed, then across the then-still-highly dangerous northern coastal region of Algeria and eventually back to Spain.

As always with a Palin journey, the primary focus is on the people encountered along the way. The locals hired or pressed into service as guides are almost always fascinating, and nearly always Michael's own cultural openness and curiosity leads to glimmerings of contact with and understanding of people who live lives that seem, and sometimes really are, so different from our own. The people, however, aren't so different. And one couldn't ask for a better travel companion (or surrogate) than Michael, with all that gentle humor to go along with the insatiable curiosity about people.

When I finished Sahara, I was all primed for Himalaya, but despite the shock and delight at finding myself transported straightaway to the legendary Khyber Pass, I wasn't initially enchanted by the first couple of episodes. I mean, a grand gathering of locals from two fairly distant villages in, as I recall, the Pakistani Karakoram, for a no-holds-barred polo match? (The play without rules.) And then there was cricket -- or was it rugby, or soccer? Whatever the hell it was, who cares?

I applied a double rescue strategy. First, as noted, I now had the new TV in place, a perfect excuse to double back. But also, since I indeed already had the accompanying book (also in hard-cover!), and now I had the idea of reading the book ahead of watching the film, and I have to say, it did seem to give me a more involving sense of who the people encountered were and why we might care about them and their ways of life. And with the book under my belt, I was also happy to encounter a number of the "Extended Scenes" that are offered for each of the six episodes.

Indeed, I came to think that Himalaya represents such an enormous journey, encompassing not just the mountains to the west of the stupendous Himalaya, the Hindu Kush and the Karakoram, but a significant chunk of lowland Pakistan and India, and the pretty much the whole of the Himalaya range (with significant coverage of Nepal, Tibet, and Bhutan), and the previously unknown-to-me far-eastern stretch of India bordering Myanmar (Burma), called Nagaland, leading naturally into the lowlands of Assam, and finally lowest-land Bangladesh, where such great waters of the Himalaya as the Ganges and Brahmaputra rivers wash not just the water but the rock and soil of the mountains into the plain and delta emptying into the Bay of Bengal.

(In Bangladesh, the former East Pakistan, by the way, we get a vivid sense of how different the Bengalis are in their Muslim identity from their various Pakistani coreligionists. I should add that differences of and conflicts in religion and politics, which were rife in this region in 2003, when the journey was made, and of course still are, are handled with breathtaking evenhandedness and sensitivity.)

Do I have to add that virtually all of these are places I never imagined seeing? Tibet! (Everest is actually seen, not from the familiar south side in Nepal but from the far less known northern face.) And not just the Tibet Autonomous Region, as the former country has been known since it was annexed by the People's Republic of China, but additional portions of the massive Tibetan plateau in the PRC itself. It's such an immense journey that boiling it down to six hours of TV must have been agony.

It may seem contradictory to suggest that at the same time an awful lot of the people and places visited aren't all that memorable, and yet have to be represented to fill out the picture of the travel path -- and again the combination of book, film, and DVD extended scenes proves immensely helpful. One common thread is that in countries that are heavily Muslim, heavily Hindu, and heavily Buddhist, there is an enormous amount of religion, about which Michael is magnificently tolerant and inquiring, but a viewer may be a lot less sympathetic. The thought of visiting one more temple or one more monastery becomes all but unbearable. Ditto the assortment of pointless festivals we partake in along the trek. It is, of course, what people do to fill out their lives, and I don't mean to suggest that their versions of these things are less meaningful than ours. Quite the contrary. But it does take its toll on one's armchair-travel stamina.

In the course of watching these six packed hours I did a lot of backtracking, but I suspect that the whole thing may look very different the next time through, and the next. There is, by the way, an extended interview added to the special features on the third DVD in which Michael talks about the whole journey, including the story (also told in the book) of how they managed the final shot of Michael sailing off in a tiny boat into the sunset on the Bay of Bengal.

Already in Himalaya, filmed in 2003, Michael displayed a keen awareness of having turned 60, and of the group aging of his entire little travel family -- after all, by then he had been traveling and working with largely the same production team for decades, and none of them were getting younger. I'm cheered by the thought that still ahead for me is one more Palin journey, New Europe.

Do I have to add that it's unimaginable that American TV would ever undertake anything remotely like these journeys? There is, after all, no obvious commercial payoff to any of them. The BBC, however, has garnered not only strong audience response to these series, but continued income from sales of the books and now the DVDs. It's not the kind of money that would impress a Hollywood mogul. Luckily that's not the standard at the BBC.

Posted by DownWithTyranny at 5:43 AM