When To Go-- Worth Paying Attention To 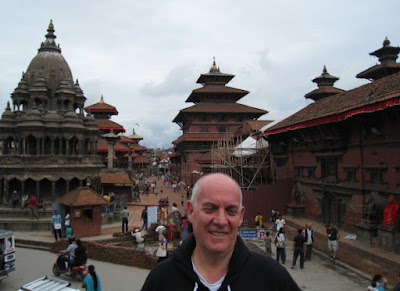 You know how standard travel guides always have a little chapter or subchapter towards the front about when the right time to visit is? There's a reason it's always there and there's a reason it's in the beginning and, most of all, there's a reason we need to pay attention. The first time I was in Bangkok it was in the summer. I mean summer's a good time for a vacation, right? Yeah, but not there. And not Kathmandu either. I sore I'd never visit either in the summer again-- but I just got home from a trip to both.

The trip didn't start out that way. It started out as a trip to Tibet with a stopover in Kathmandu on the way and a stopover in Bangkok on the way home. Two weeks out the government of China, the occupying power in Tibet, suddenly canceled all foreign visas. The smart thing at that point would have been to just cancel the whole trip... or change it to a trip to Ethiopia, a country of eternal spring. But... well who doesn't love Kathmandu?

In 1971, the first time I visited, it really was like some kind of a Shangri-La with a hippie tinge. That was then. Even in the early '90s, the last time I was there, it was still fascinating and worthwhile. A lot has changed. For example it used to not be all that polluted, let alone the most polluted city on earth. And last time I was there it was during an invigorating December. Summers in Kathmandu are steamy, rainy and muddy. It's monsoon season, not a good time to visit. More to the point, Kathmandu's many charms-- balanced with the inconveniences-- is probably best savored just once. It's not a place for a casual tourist to go over and over, not like, say, Bali or Paris. 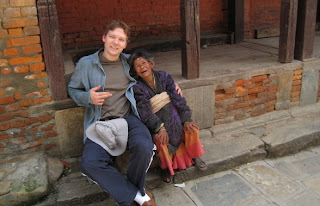 The best times we had on the trip were all outside the city-- visiting nearby Bhaktipur and Patan and, better yet, trekking in the mountains. I know sloshing around in the mud up in the mountains during a monsoon might not sound wonderful, but it actually was. Being lost, wandering around on unmarked paths at the top of the world, coming across little villages and spectacular temples where no one spoke a word of English except small children has its own special charm. And we had high rubber boots. It doesn't make any sense to visit Nepal without trekking. The Darbar Squares are all nice (photo of me up top at the Patan Darbar Square) but the mountains are what Nepal's really all about. Just avoid the leeches... and better to go when it's not monsoon season.

The civil war drove a million rural people into Kathmandu. There's been no increase in infrastructure. So it's too crowded and verging on uninhabitable. Another big difference is that the tourists aren't western hippies any more. The tourists are now basically all from India and China. And the tourist trade caters to them and to their tastes. It's a big change. Asia's changing that way. It's not as overwhelming in Bangkok because there are so many tourists there and it's such a major cosmopolitan city. But that's also a place best visited during our winter. In the summer, the weather is unbearable. It's sweltering hot and the humidity is beyond anything in Houston at its worst. You step outside and you're soaked in sweat within minutes. And then if you go inside anything-- a building, a taxi, a train... it's bone-chillingly freezing and deadly dry. No one understands the settings on the AC between zero and 10. It's always 10. So you're never dressed properly. Outdoors you want as little clothing as possible. Inside you need to be bundled up. December is the best time to visit, when it's still warm but not sweltering and the skies aren't prone to open up and release sheets of rain every now and then the way they do during the summer.
Posted by DownWithTyranny at 4:47 PM