Urban Gadabout: Newark Bay or bust! (Is there anyone else whose pulse is sent racing by the prospect?) 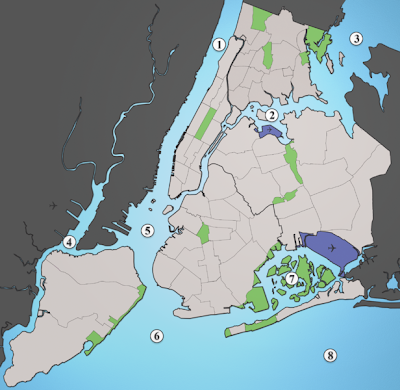 A nice overview of the waters in and around New York City (which is in light gray), pretty much all really inlets of the Atlantic Ocean: 1. Hudson River; 2. East River, though the number indicates the wilder upper portion, which has more in common with -- 3. Long Island Sound, to the east (between Long Island and Connecticut); 4. Newark Bay; 5. Upper New York Bay, and on the other side of the Verrazano Narrows -- 6. Lower New York Bay; 7. Jamaica Bay (that big purple splotch along its shore being JFK Airport); 8. Atlantic Ocean. Newark Bay (4) connects via the Kill Van Kull (to the northwest of Staten Island) to the Upper Bay and via the Arthur Kill (to the southwest of Staten Island) to Raritan Bay, at the bottom-left corner of the map.

Here's the news in a nutshell: a New York Harbor tour that targets . . . Newark Bay!

I realize it's a pretty small subset of readers who will share even a fraction of my excitement about this news. Newark Bay? The more or less inland harbor -- hidden from view from the outer coast by the big land blob that is Staten Island -- that is the, the industrial hub of North Jersey? Would it help to think of it as the maritime heart of Sopranos country?

It's still not exactly glamorous, but Newark Bay is now where the hottest action of New York Harbor, since despite its remove from the open ocean, thanks to diligent dredging of the Kill Van Kull and Arthur Kill, its outlets to that ocean, it can handle all many of the larger ocean-going freight vessels, and its western shore gives them access to the North American mainland, a major saving in shipping costs.

Maybe it's just this thing I've developed, this late-life fascination with the real geography of the harbor,now going beyond the obvious part that's on display from the Battery (the southern edge of Manhattan Island) and from the New York City Department of Transportation's gift to harbor hounds, the Staten Island Ferry. That's the Upper Harbor, 5 on the map --

* lying between Manhattan to the north, Brooklyn to the east, Staten Island to the south, and New Jersey (north to south: Hoboken, Jersey City, and Bayonne) on the west;

* with Governors Island sitting just south of Manhattan and east of Brooklyn, and with Liberty and Ellis Islands just east of the New Jersey coast;

* and with the Hudson River projecting north on the west side of Manhattan, separating it from New Jersey;

* and the East River to the east of Manhattan, separating it from Brooklyn (spanned in these lower reaches by the Brooklyn, Manhattan, and Williamsburg Bridges) and as it continues northward separating Manhattan and the Bronx from Queens;

* and just visible from standard Upper Bay outposts, the Kill Van Kull separating Staten Island on the northwest from New Jersey (with views from some angles of the Bayonne Bridge over the kill);

Nowadays there seem to be all sorts of boats cruising the upper harbor, and I've done those tours. Mostly, though, they seem to be about what you do besides harbor-viewing, like dinner, or brunch, or fireworks (or sailing on a yacht, or a sailboat, or . . .). In the summer there's now free ferry service to Governors Island. (In fact I'm headed to Governors Island tomorrow.)

I've been trying to fill in my picture of the harbor and the coastline. To the east I did my pilgrimage to Plum Beach, Brooklyn (on Rockaway Inlet, more or less midway between 6 and 7), to observe horseshoe crabs with Urban Park Ranger Andrew. Farther east I took advantage of an Urban Park Rangers walk along Rockaway Beach, and still farther east there was a Shorewalkers walk along Jones Beach.

Farther up the East River, I seized the opportunity of a Municipal Art Society walk to get a close-up view, and actually walk over, Newtown Creek, which forms four-plus miles of the border between Brooklyn (to the south) and Queens (to the North), the NYC boroughs that occupy the western end of Long Island.

For the harbor itself, for Jane's Walk weekend in May, the tour I chose took me to the north shore of Staten Island, with a good view of the working harbor, even on a Sunday -- you're reminded that ships don't get "days off" while they're at sea and under intense pressure to make their schedules), including my best view as of then of the Kill Van Kull separating Staten Island and New Jersey, including a pretty good view of the Bayonne Bridge spanning the kill.

By now it should be clear that a major role in the geography of the southern part of the harbor is played by Staten Island, and for that reason, and also for my shocking ignorance of this borough of the city of New York, I've been undertaking a sort of crash course in Staten Island, taking advantage of Municipal Arts Society tours to Snug Harbor, on the Kill Van Kull shore (though we didn't get much of a view of the water): Tottenville, on Raritan Bay, at the southern tip of the island (to which I recently returned for the Second Annual Raritan Bay Festival), and Stapleton Heights. (In fact, I'm about to head out to an MAS tour of the budding cultural scene in Staten Island's St. George.)

In my mind, at least, all of this was pointing me toward -- what else? -- Newark Bay, but I honestly had no idea how I might tackle it as a destination. That is, until I was, as usual, perusing the week's listings in Time Out New York and found myself staring at this listing:

As one of three of its New York Harbor tours, this trip around Newark Bay on Circle Line's Zephyr includes views of the Red Hook Container Terminal and Bayonne Bridge, a passage through Kill Van Kull, which divdes Staten Island and New Jersey, and an exploration of the busy container ports across the water.

There are much more detailed descriptions of each onsite. Still-to-come dates for the Newark Bay Tour, in addition to July 12, are August 9 and September 13; for the Brooklyn Tour, July 26 and September 27; and for the North River Tour, August 23. If there was any financial advantage to booking all three tours, which I was certainly prepared to do, I couldn't find any trace of any, but you better believe I went ahead and booked Tuesday's epic trip to Newark Bay.

Luckily for me, I work within walking distance of Pier 16, so with just a little fudging I'll be able to make that 6:15 departure. I've already printed my ticket, but I'm still supposed to be there 30 minutes before departure time. Can you tell that I'm excited?
#
Posted by KenInNY at 4:00 PM