By itself worth the trip to Staten Island's Snug Harbor Cultural Center: The Noble Maritime Collection 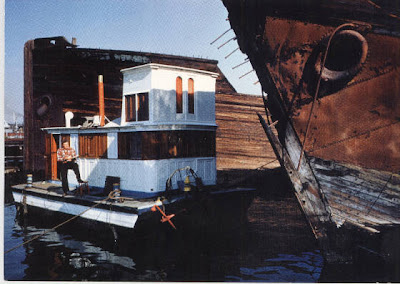 The houseboat that seaman-artist John A. Noble used as a studio (mounted on a barge on the industrial Bayonne side of the Kill Van Kill, which separates New Jersey from the north shore of Staten Island) was laboriously disassembled, transported, reconstructed, and painstakingly restored in the Noble Maritime Collection, a constituent of Staten Island's Snug Harbor Cultural Center. During Noble's lifetime, the houseboat-studio was featured in a 1954 issue of National Geographic.

As I mentioned Friday night, my principal activity yesterday was a Municipal Art Society all-day trip to and walking tour of Snug Harbor Cultural Center on the north shore of Staten Island. The weather was lousy, but held up well enough for tour leader Francis Morrone, a noted architectural historian (best known for his extensive writing on the architecture of Brooklyn, but he's quick to point out that it has been a largely accidental "specialty," and some of the best MAS tours I've taken with him, like this one, have been in other boroughs), to give us a splendid introduction to the history of the first five buildings (known, efficiently, as Buildings A to E), all in the Greek Revival style that was in vogue in the early 1930s, for the "decrepit" sailors' home, Sailors' Snug Harbor, funded by the will of Robert Richard Randall -- a fascinating story in its own right. 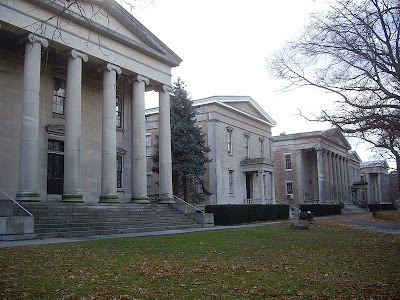 "Temple Row": the original five buildings, in Greek Revival style, for what was then Sailors' Snug Harbor and is now the Snug Harbor Cultural Center. The central building, "Building C" -- begun in 1931 and finished in 1933 -- was discovered as late as 1970 to have been designed by the massively influential architect Minard Lafever. (Other buildings were built, Francis explained to us, from Lafever's wildly popular published plan books.)

At its zenith, Sailors' Snug Harbor housed some 1000 retired seamen who upon being no longer fit for seagoing had no place on dry land to "retire" to. With changes in the way maritime commerce is conducted in the 20th century, not to mention social innovations like Social Security, the haven enjoyed steadily declining use, until finally the last residents were moved to a new facility in North Carolina. Over the clamoring of developers eager to get their clutches on the extraordinary site, with immense effort on the part of the rising preservation movement of the 1960s most of the site was eventually landmarked and designated for use as a new Snug Harbor Cultural Center, already home to an assortment of constituents, with the rest of the site still very much a work in progress.

We actually benefited from the lousy weather. It encouraged our leaders, Francis and the MAS's director of tours and programs, Tamara Coombs, herself a Staten Islander, to revise the original plan for the afternoon to concentrate on indoor-type activities, notably allowing us additional time in the John A. Noble Maritime Collection, which occupies Building D. We were already scheduled to eat our lunches there (we had been instructed to come sack-lunch-equipped) but wound up with an extra hour to explore a museum I'd never heard of, but which has become one of my prized spots in the city. Now that I know what and where it is (Snug Harbor, by the way, is a barely 10-minute bus ride from the St. George Staten island Ferry terminal), I definitely plan to go back. As I said to our incredibly gracious and informative host (I feel terrible for not getting his name -- the collection's assistant director, Ciro Galeno, perhaps?), the Noble Collection is a destination worth the trip by itself.

John A. Noble was a seaman-slash-artist, who developed an early fascination for the way the sea tested the men who made their living sailing it, and for a number of years made his living at it, but gradually retired from active seagoing when he discovered he could make a living as an artist of the sea. He drew and painted, but discovered he had a special affinity for lithography, which also provided him with a regular source of income. Noble's parents, both artists, split their time between France, where the younger John was born, and the U.S. The elder John Noble, a painter, somehow managed to be known in France as "Wichita Bill." One of the remarkable exhibits in the museum is a room called "The Atelier of Wichita Bill," a painstaking reconstruction, using actual family objects, of the senior John Noble's studio in France. 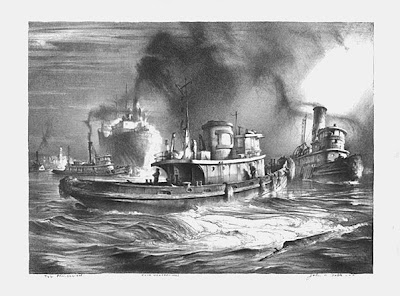 Noble's passion for tugboats is well documented in the Noble Maritime Collection's current exhibition on the subject. As our host pointed out to us, tugboats are still an active part of harbor life, and the exhibit has drawn a lot of visitors just for their interest in the tugboat life.

Probably the most fascinating exhibit is the transplanted and restored houseboat that Noble used as a studio, eventually mounted on a barge on the industrial Bayonne side of the Kill van Kull, which separates New Jersey from the northwestern corner of Staten Island. His bio on the Noble Maritime Collection website (noblemaritime.org) explains:

From 1928 until 1945, Noble worked as a seaman on schooners and in marine salvage. In 1928, while on a schooner that was towing out down the Kill van Kull, the waterway that separates Staten Island from New Jersey, he saw the old Port Johnston coal docks for the first time. It was a sight, he later asserted, which affected him for life. Port Johnston was "the largest graveyard of wooden sailing vessels in the world." Filled with new but obsolete ships, the great coalport had become a great boneyard. In 1941, Noble began to build his floating studio there, out of parts of vessels he salvaged. From 1946 on, he worked as a full-time artist. Often accompanied by his wife, he set off from his studio in a rowboat to explore the Harbor. These explorations resulted in a unique and exacting record of Harbor history in which its rarely documented characters, industries, and vessels are faithfully recorded.

.
Along with the restored studio houseboat itself, the exhibit includes wonderful photographs showing how the houseboat was actually moved to and then into the museum and then restored. As our host (given his tremendous hospitality and helpfulness, I feel terrible for not getting his name -- the collection's assistant director, Ciro Galeno?) pointed out, the story of how the exhibit came to be is probably at least as fascinating as the exhibit.

And throughout the museum there is a sensational attention in the presentation to context, with writings of Noble's to provide background for his artwork, and all manner of objects, from Noble and a wide range of other sources, to fit both Noble's life and work and the history and mission of Snug Harbor in context. There is, for example, a room that's been reconstructed to the state it would have been when it housed a pair of Snug Harbor residents. There's a room that has been left unaltered for a glimpse of the state the building was in when the museum was created in Building D.

The museum's executive director, Erin Urban, had met and interviewed Noble not long before his death and became fascinated by both his life and his work, and after his death determined that the latter needed to be made accessible, out of which came the idea for the Noble Maritime Collection, taking full advantage of its constituency in Snug Harbor Cultural Center. Apparently through sheer force of will Urban has made into a reality, with a staggering range of activities, and support not just from funders but from a small army of volunteers known as the Noble Crew, whose estimated $1 million worth of labor she has paraded before all manner of potential donors to raise more money.

If you're in the city and have a free day for the expedition, don't miss the Noble Maritime Collection. The gallery is open Thursday-Sunday, 1-5pm.


SPEAKING OF GREAT NYC OUTINGS, A REMINDER ABOUT "THE WORLD OF THE #7 TRAIN" THIS SATURDAY

The last I heard there were still openings for what "urban geographer" Jack Eichenbaum calls his "signature tour," coming up this Saturday, April 30 -- an all-day exploration of selected sites along the route of the no. 7 subway line to Flushing in Queens, which I mentioned recently. Jack is a terrific tour guide, and this is some of his favorite turf. Here again is his description:

THE WORLD OF THE #7 TRAIN 10am-5:30pm SATURDAY, APRIL 30, 2011
This series of six walks and connecting rides along North Queens’ transportation corridor is my signature tour. We focus on what the #7 train has done to and for surrounding neighborhoods since it began service in 1914. Walks take place in Long Island City, Sunnyside, Flushing, Corona, Woodside and Jackson Heights and lunch is in Flushing’s Asiatown. Tour fee is $39 and you need to preregister with Jack Eichenbaum. The full day’s program and other info is available by email jaconet@aol.com. Questions? 718-961-8406. The tour is limited to 25 people. Don’t get left out!

You can also get information on Jack's website. I sent my check in as soon as I heard about the tour. It sounds to me like a unique opportunity.
#
Posted by DownWithTyranny at 9:00 AM