The Least Expensive Cities In The World 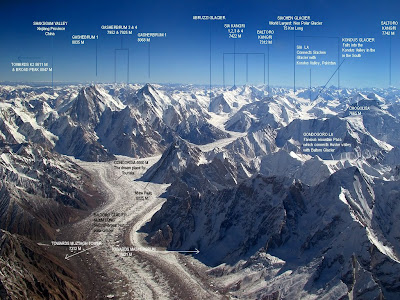 Karakoram Highway, the world's highest, sort of Pakistan's Route 66, except you don't wind up in L.A.
Today's L.A. Times has a photo essay on the least expensive cities in the world to visit. I'm always on the lookout for a good bargain but I've never considered looking for a vacation spot because it's one of the 10 cheapest places to go. That said, between Roland and I, we've been to most of these places. They are inexpensive-- but not always the most memorable. Cheapest of all is Karachi, the biggest city in Pakistan, a virtual hellhole and someplace I wouldn't go to if someone paid me. In fact, I was in Pakistan twice and managed to avoid Karachi both times. Crowded, seething with discontent and misery, Karachi is on no one's list of places to visit-- not even Pakistan's It's dangerous and offers nothing much in return. I loved visiting Lahore, the country's cultural capital, and Peshawar, a veritable arms bazaar in the wild, untamed west, and I was in Islamabad-- third cheapest in today's list-- when it was being built and found it interesting in a theoretical way I always find cities built from scratch specifically to be a national capital. The main attraction is the giant Faisal Mosque, once the largest in the world (now the 4th largest) that holds around 300,000 people. It was built in 1986 and paid for by King Faisal of Saudi Arabia. That said, according to a recent Guardian, the best places to visit in Pakistan for an average tourist (so, not counting climbing a Himalaya) are ancient Taxila, Lahore, the Karakoram Highway (the world's highest), Karimabad in the Hunza Valley, and Lake Saiful Muluk. None are on the list; all are incredibly inexpensive if you want them to be.

Roland's a big fan of Latin America and he's been to both Managua in Nicaragua (second cheapest) and La Paz, Bolivia (4th cheapest) and loved them both. He was especially unimpressed by La Paz's Mercado de las Brujas, the witch's market, which specializes in dried frogs, llama fetuses and all kind of aphrodisiacs.

Other than my extended stays in Afghanistan in the '60s and '70s neither of us has been to the Stans, although Alan Grayson, who has, assures me they are well worth the efforts. They're on the list. Today's Times essay lists Ashkhabad in Turkmenistan as the 5th cheapest place to visit and Bishkek in Kyrgyzstan as the 6th cheapest. Turkmenistan is almost all a giant desert and is sparsely populated. A normal person thinking of traveling there might read the Bradt travel guide to Turkmenistan; I'd recommend Ken Silverstein's hilarious novel, where takes place entirely in Washington, DC, Turkmeniscam: How Lobbyists Fought To Flack For A Stalinist Dictatorship. I might add, that aside from North Korea, Turkmenistan is the world's only remaining Stalinist dictatorship. I always wanted to go there to see some of the old Silk Road towns, like Ashkhabad, but there isn't really much left to see after you've taken a gander at the Ashgabat Flagpole (the world's tallest freestanding flagpole). Instead, there's the Darvaza Flaming Crater which is where, 40 years ago, n oil rig collapsed into a huge cavern of natural gas, creating a fire-filled crater. It's still burning and is hyped as the Gates of Hell.

We've both been to Calcutta many a few times-- Roland again this year-- and that's certainly worth a visit for it's old architecture from the days it was capital of the Raj. It's one of the places where it is inexpensive and filled with plenty of value including wonderful hotels and restaurants.

Roland is really jonesin' for a trip to Ethiopia, and Addis Ababa is the 7th cheapest in the world. But it doesn't have much allure for me and I'm holding out for Madagascar and South Africa. I'm not a big fan of Ethiopia's very distinctive cuisine-- which is available in great abundance on Fairfax Avenue in L.A.-- but Addis Ababa boats lots of colonial monuments and Lucy, humankind's 3-million-year-old ancestor, can be found at the National Museum there.

Numbers 9 and 10 are Tegucigalpa, Honduras and Windhoek, Namibia, neither of which I expect to visit any time soon, regardless of the cheap prices. Well... maybe Tegucigalpa if it's on the way someplace nice.
Posted by DownWithTyranny at 1:20 PM

Email ThisBlogThis!Share to TwitterShare to FacebookShare to Pinterest
Labels: Pakistan

The same, I'd never choose a destination on wether it's cheap or not, but your way to describe some places makes me wanna go there...