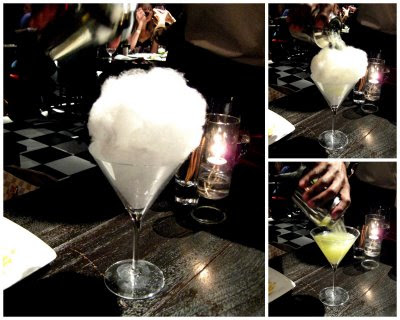 molecular gastronomy
Roland seemed pissed off yesterday when he told me that CNN reported that the new San Pellegrino list of the 50 best restaurants in the world was out and that there isn't one single Los Angeles restaurant on it. It probably didn't cheer him up any when I said that if Pellegrino expanded to the top 100, L.A. still would probably not make it. (I was right.) And the kinds of restaurants that Roland and I favor these days-- healthy ones-- don't even get considered. In fact, we were sitting in Life Food Organic when he mentioned it, munching tiramisu as delicious as anything we ate at Il Canto in Siena's Certosa De Maggiano Hotel-- only not harmful to our well-beings.

On the other hand, except for professional gourmands, who's eaten in as many of these restaurants as we have? The shock of Noma in Copenhagen being named the best restaurant in the world over El Bulli in Roses, Spain came as a bit of a shock-- although probably more to Ferran Adrià than to us-- but neither of us is that big a Scandinavian food fan anyway. And El Bulli (between Barcelona and Perpignan)... any time! El Bulli has been numero uno over and over again. This review by Sue Dyson and Roger McShane will give you an accurate idea of what we love about it.

A visit to El Bulli requires a willingness to suspend the reality that eating is a basic fundamental of life, something we do in order to survive. There is little about a meal here that bears any relationship to notions of eating for living. It's an experience that will give you sensual and intellectual pleasure, as far removed from eating to live as reading Kafka is to following a set of instructions on how to program a video recorder. The connection is there but it's not immediately obvious.

In a world where too many people struggle to get the calories they need just to survive, it is a luxury to eat just for the pleasure of a series of tantalising games, where the satisfaction of hunger doesn't seem to have any part in the motivation for preparing and offering the meal.

Once you accept all that, and it doesn't take long because from the moment you arrive it's so beguiling, then you're in for a memorable experience, one which the restaurant staff appear to enjoy as much as the diners. If you choose the degustation menu, and on a first visit almost everyone does, you'll experience some 25 different tastes, each one memorable and some exquisite.

...The meal is progression of some eleven courses. Some are a single dish. Others are a collection of three or four exquisite tastes. In all, you'll eat about 25 different dishes. Sometimes, you're given strict instructions on how to eat something, for example the famous pea soup, served in thin cone-shaped glass. Drink it all in one go is the advice. While the texture and colour remain constant, as you drink the temperature changes, starting hot and finishing cold. It's a fascinating education as the flavour changes along with the temperature, its ‘peaishness' more obvious as the temperature lowers.

Every dish is served with purpose-designed crockery. In fact every element of this place appears purpose-designed, not least the streamlined and beautiful kitchen, where each small masterpiece is constructed, and which chef Ferran Adriá's partner and master of the front of house, Juli Soler, shows off proudly.

Highlights? Although famous for his ethereal foams, which aim to capture the essence of a flavour, and which have now crossed the Atlantic and have even been sighted in Singapore, for us two of the most memorable flavours were ravioli. One, sea-urchin ravioli, served with a sea-urchin jelly, had a rich, creamy intensity. It was served with pineapple and mango jelly, a fennel jus, and a raspberry-coloured foam made from aromatic herbs! Another ravioli was almost transparent, revealing ahead of the first bite, small bright-green broad beans and just a hint of a strong ham. A later ravioli was filled with oysters, served with oyster jelly, with seaweed and tea foam. Hidden inside this were two tiny, invisible, pieces of extraordinary-intense lemon zest, revealed only in the mouth...

But this is Noma's year and everyone is raving about the young, aggressively Nordic chef René Redzepi. He's all about "a regional, seasonal agenda that is right on the cutting edge: if it isn't available in the Nordic region, he won't cook with it. The result is a very idiosyncratic style of food that speaks to concerns about the way a global food culture turns our eating experiences a uniform beige."

But it goes much further than the agenda: Redzepi is a gifted cook with an extraordinary palate who does amazing things with wild herbs and flowers, bitter green leaves and the freshest local seafood.

In some quarters, of course, the decision will be read as a slap in the face for the modernists, especially for El Bulli and the Fat Duck.

Heston Blumenthal, chef and owner of the Fat Duck, responds-- quite reasonably, I think-- that if his or Ferran Adrià's restaurants had plummeted down the list, then that might well be a viable argument; as it is, what we are really seeing is just a little bit of jostling in the rankings.

What other stories are there? The UK has just three entries, with Claude Bosi's Hibiscus making its first appearance, alongside Fergus Henderson's St John. There are a couple of other places in the UK I would happily see in there, but I can't argue with that overall result: three out of 50 for the UK seems about right. It was always absurd that London restaurants such as Nobu and Hakkasan ever made a showing. The best Japanese and Chinese restaurants in the world being in London? Ludicrous.

The fact that Chateaubriand is the highest ranked French restaurant, ahead of all the over-gilded gastro-palaces, is a breath of fresh air. It is a low key bistro, with apparently fabulous food (I've never been) and if the food is what matters more than the decor then that has to be a good thing. I'm delighted that Japan, with two restaurants, makes a showing, though it is still grossly under-represented.

We keep trying to fiddle with the judging system to up Japan's representation but it's very tough, because the interplay between Japan and the rest of the world remains low key. And that's what's needed for a restaurant to break through: lots of people from outside the country in which it is situated eating there.

Of course, lots of people will take issue with the list: in some European countries it has been decried as some sort of fix (though god knows how you are supposed to fix the votes of 800 people). As I've said in previous years, that sort of thing is taking it far too seriously.

Is it the definitive ranking of the world's top restaurants? Absolutely not, because there is no such thing as a definitive answer to the question. It is just a list, and we all love one of those. Each year, as a result of its publication we argue for a few days about the merits of certain restaurants over each other and, while it is only a tiny part of the conversation to be had around food, that has to be a good thing.

Aside from El Bulli. my faves from the list this year are-- in order of list rankings, not mine-- Daniel in NYC, Per Se (NYC), Pierre Gagnaire (Paris), Le Bernardin (NYC), Iggy's (Singapore), L'Atelier de Joel Robuchon (Paris), the French Laundry (Yountville, although they also have a wonderful affiliate, Mozaic in Ubud, in the middle of Bali that we love), the aforementioned Il Canto, Alain Ducasse (in my favorite place to stay in Paris, the Plaza Athénée), Biko (Mexico City), Hibiscus (London), Eleven Madison Park (NYC), and then in the bottom 50, Jean Georges (NYC), Chez Panisse (Berkeley), The River Cafe (London), Enoteca Pinchiorri (Florence), Masa (NYC) and La Pergola (Rome).

If there's a restaurant remotely like Spain's El Bulli in Los Angeles it's a new Basque, not Catalan, restaurant opened by José Andrés (who actually trained under El Bulli's Adrià) at the SLS Hotel on La Cieniga. The L.A. Times described the experience of eating there as "Fellini-esque, a gastronomical circus, a flirtation with the flavors and soul of Spain? Los Angeles has never seen anything remotely like this..." If any L.A. restaurant is ever going to wind up on that San Pellegrino list, it's El Bazaar. We took a friend from out of town there last weekend. When it first opened, the Wall Street Journal reviewed it and came away saying it "may be the future of fine dining." It cost over $12 million to put together. "It serves no appetizers or entrees: All meals are made up of tapas, and signature items include drinks and canapés dipped in vats of liquid nitrogen. First-time visitors might wander the ground floor of the SLS Hotel looking for the restaurant-- and not realize that they are already standing in it. A palm-reader roams the floor, offering predictions... A mobile cart of liquid nitrogen wheels up to tables that order a $20 Brazilian cocktail, which is dipped and instantly frozen in the steaming brew. Another cart offers 'Cotton Candy Foie Gras,' a block of rich paté that a waiter twirls in spun sugar. A third cart serves "caviar cones," fish eggs served in paper-thin pastry cones... Half the menu belongs to the category of avant-garde cuisine, or molecular gastronomy, which uses advances in culinary science to create new flavors and textures. Mr. Andrés's "olive oil bon bon," for example, looks like a tiny glass sculpture but is in fact olive oil encased in solidified sugar; bite down and it bursts flavorfully in the mouth. Avant-garde cuisine has transformed fine dining in Europe. American avant-garde chefs, from Grant Achatz of Chicago's Alinea to Wylie Dufresne of WD-50 in New York, are heroes to many young chefs."

We're having dinner at Cru tonight. The food is organic, healthfully prepared, delicious and... well eating there will add years to your life, rather than cut it short. Here's the menu (click to enlarge it): 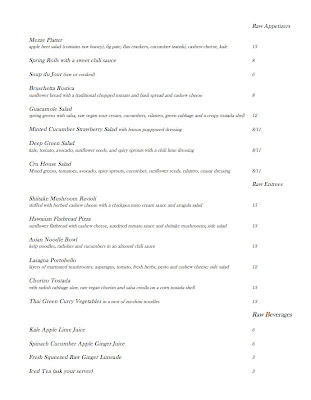 Posted by DownWithTyranny at 10:16 AM

Actually, if any LA restaurant gets on the list, it should be Urasawa, which is at least as excellent as Masa but with the added incentive of feeling like a more pampered dining experience.

Eating our favorite foods are really great but if we could eat those foods on one of the 50 best restaurants in the world is really amazing experience. I wish my dreams come true. Thanks.