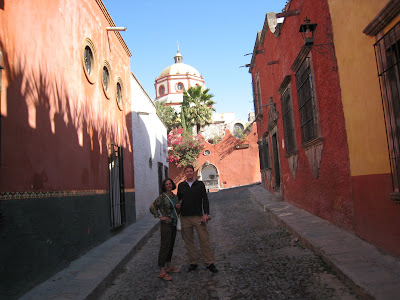 Helen and Roland, hanging out in our 'hood
The Mexican state of Guanajuato isn't a string of neon-lit party towns on the beach, the kind of place that attracts most tourists. In fact, if slathering on the tanning oil all day and getting drunk, smoking pot and partying all night is your idea of a vacation, there are definitely better places than San Miguel de Allende and the towns in this part of Mexico tailor-made for you. This probably isn't the right blog to look for them though. In San Miguel there is no beach. And no neon. It's the living, beating heart of old colonial Mexico. It's landlocked, high in the mountains and smack in the center of the country.

San Miguel de Allende is one of several small cities that were once fabulously wealthy silver-mining towns-- thus the rich infrastructure, elaborate grand cathedrals, stately homes, etc-- and eventually fell on hard times as the silver was depleted. Now Guanajuato is one of Mexico's poorest states but these towns have bounced back to some extent because of their natural beauty and their appeal to tourists and retirees. Most of the retirees are Americans and most of the tourists are Mexicans. San Miguel is right out of the 17th Century-- cobblestone streets and buildings that look like a colonial Mexican film set. In fact, we've seen two films being shot since we got here.

April, May and June are the only months where the weather is hot, although it never really gets unbearable. It rains in the late afternoons in the summers. Otherwise the weather is perfect all the time-- no A/C or heat required. The town is 6,400 feet above sea level so it does take a little time to get used to.

We rented a gorgeous townhouse with 4 bedrooms, a huge, well-equipped kitchen/dining room, a living room, three and a half bathrooms, a rooftop patio with a breathtaking view of the whole city, and a lush, peaceful garden. The house comes with a housekeeper. I always prefer renting a home to staying in a hotel and it's something I've done in Goa, Bali, Buenos Aires, Phuket, and wherever I can when I go someplace for more than a week. The biggest attraction for me is that it helps me feel like I'm not just a here-today-gone-tomorrow tourist but actually living in the place. That's especially easy in San Miguel, which is completely set up for that kind of tourism. Another advantage is that it generally costs as much for a whole week in this kind of situation as it does for a night in the same calibre hotel. Some people prefer hotels for other reasons; I'm not one of them.

Another advantage is eating, and not just how much more economical it is. My concern with food is usually related to health concerns. Preparing food at home is almost always far more healthy than eating in restaurants-- especially in Mexico-- where eating out means deadly lard-based cooking or, in the high-end restaurants, overly rich meals that are just as deadly. After trying a couple of top-end restaurants-- La Capilla (the "best" restaurant in town, up on a rooftop attached to the main cathedral) and Casa de Sierra Nevada en el Parque-- I decided to eat at home as much as possible to avoid the overly rich and unhealthy food. Grocery shopping in the central market is convenient, easy as pie, pleasant and cheap. Most of the vegetables we eat in California come from Mexico anyway.

I did discover a wonderful vegetarian restaurant, El Tomato, on Mesones (between Relox and Hidalgo) run by Mariano Alvarez, a young expat chef from Buenos Aires. The food is organic, delicious and completely healthful. It's been open for 3 months and it's my idea of the best restaurant in town. It costs about a third of what the high end places that make you sick cost. There's an awesome juice bar around the corner on Relox that also sells some basic healthy eatin' supplies. Eventually I discovered an actual health food store-- organic fruits and vegetables and all-- Natura on Calle Nueva over near el Instituto Allende. And around the corner from that, on Zacateros, is another, even newer vegetarian restaurant but I've gone by 3 times and never found it open yet.

Almost 10% of the residents of San Miguel Allende are expats-- many of them retirees from the U.S. and Canada. Somehow it's still managed to keep its authenticity and charm-- probably because the type of Americans who are attracted to live in a place like this aren't looking for the kind of glitzy plastic glamour that enchant uptight Republicans. Its very artsy, with galleries everywhere in town-- as well as an internationally renowned art school (the aforementioned Instituto).

We lucked out because right after we decided to come here, the exchange rate changed in our favor-- gigantically. Last month a dollar bought you 10 pesos. Now it's 14 pesos. That makes everything incredibly inexpensive for us. The place is very relaxed, easygoing and friendly. Yesterday two of the friends I'm sharing the house with, Helen and Justin, spent the day horseback riding in the countryside. I spent the day wandering around town, reading and getting a great massage at the Laja Spa (about $45/hour). The central square in front of the cathedral is a beautiful tree-lined park with free wifi.

Above I was complaining how the restaurant on Zacateros was closed all 3 times I tried to visit. Make that 4. But, there's good news too: just a couple blocks up Zacateros, behind an antique store called Casa Grau, is a gorgeous space with a vegetarian/health food type restaurant operated by another Argentine expat, El Bajofondo. I had lunch there and the food was as delicious as the patio garden dining was relaxing and beautiful; very inexpensive too! And speaking of vegetarians, my friend Pach just informed me that there's a wonderful new vegetarian blog that just started, Just Vegging Out by David, a Washington, DC labor lawyer with two chihuahuas.
Posted by DownWithTyranny at 8:22 AM

Its a nice and cool Place..

Hope i can go to San Miguel De Allende (Mexico)

Folks, If you want to know other great travel destinations, feel free to view Travel Blog and see great, wonderful and some historical places that will amazed and would loved you to go and explore.

Mexico is one of the best places to visit all tourist in the world, this blog is useful for tourist guide. bestplacestravelvacationbeachworld.blogspot.com

We at Casa Schuck boutique bed & breakfast in San Miguel de Allende thank you so very much for loving our beautiful city. We really enjoyed reading your perspective. It confirms to your readers that all is well here. San Miguel de Allende's incredible culture coupled with climate & history. It is one of the toplists for destinations with a perfect balance of old and new. Cafes, restaurants, art galleries, clubs, bars, dramatic churches and so much more

Last month I went to Mexico to visit a friend of mine who lives there, and he took me to San Miguel De Allende. I was fascinated. Then I took generic viagra and went to his apartment to sleep.

Great! one of the best place people must visit. .=)

Mexico is a favourit tourist destination.

Great article and useful too. Make me want to go there too. May I suggest your next destination to be in Malaysia? It a wonderful country with friendly local,multi races, multi religion (cristian included), peaceful, topical climate and cheap too.Take a look in my blog - http://best2knowall.blogspot.com/
or search Malaysia in the internet.
Thanks and have a nice day.