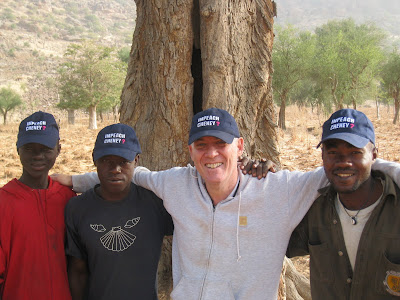 Can't read our logos? Click the pic
Ahhhh... Mali, land of my dreams; well that might be a little exaggeration but ever since I was a kid I always wanted to go to Timbuktu. And after I read Paul Bowles The Sheltering Sky

I knew for sure I would travel to that city someday (even though I have a feeling it was set in Gao, not Timbuktu; just a guess). A few years ago Roland and I drove to the end of the road in Morocco, Mahamid, where there is nothing but flies and sand dunes and a guy and his son willing to take you out into the desert on camel. And a big blue sign that says something to the effect of "Timbuktu 52 days (by camel)." We decided to go with the guy and his son for a jaunt into the Sahara... but not all the way to Mali.

Today I finally arrived. Senegal does not prepare you at all-- except that they share a language (French) and a currency (CFA). The weather in Dakar was very pleasant, around 80 by day with a nice breeze off the ocean and high 60s/low 70s at night. Bamako isn't an inferno, but close enough. It's hot and dusty. And Dakar is almost like Europe in comparison. In Dakar you can't open your eyes without seeing at least one white face-- 25,000 Frenchmen live there and at least as many Lebanese Armenians. Here I haven't seen any white people since I arrived. I sat next to a French anthropologist on the 90 minute plane ride from Dakar and she told me there are about 2,000 French residents and the same number of Lebanese. I also ran into quite a few missionaries and missionary children on the plane and in the airport, including a huge guy and his huger wife and two huge children who are stationed way in the interior in a small town I had never heard of. He said he's from Iowa but he was born here-- his parents having been missionaries too-- and has lived here all his life, although goes back to Iowa every few years to visit.

So far-- and I know this is unrelated to everything else I'm about to experience in Mali-- the infrastructure is superb. The highway from the airport was excellent, far better than Dakar's in everyway, although where the Dakar 'burbs looked pretty well off and even glitzy, the Bamako 'burbs could have been almost anywhere in the Third World. I kept flashing back to Pakistan.

I'm staying at the Hotel Salam and OMG! It is really top of the line, not just top of the line for a dumpy place but really nice for anywhere. The hotel in Dakar, the Sokhamon, was small (31 rooms) and boutequey with a certain charm but hobbled with amateur management. This place is impeccable. I might add that the price for a single is CFA 90,000 but that I had made a reservation online and it was only CFA 50,000. It's hard to translate that into dollars because that exchange rate for the dollar is absurd and if you change your money into Euros and then buy CFA with Euros, the difference-- in your favor-- is a lot.

OK, I went to sleep after I wrote that last paragraph-- my Internet time having expired-- and today is... hot and dusty and humid. The hotel computers-- fancy as they look-- aren't working so I walked a mile or so to a market area and found an internet cafe which is in pretty good shape and cheaper than the hotel's (of course). The town is very spread out-- opposite of extremely compact Dakar. People here seem less outgoing and exuberent than in Senegal, where everyone was ready to party at any time. People seem more shy and stand-offish here. There are a plethora of "guides" who have overcome this. The hotel is still nice the morning after but below the spit and polish... well, I should temper my gushing enthusiasm a little-- although the food in their restaurant was excellent and there is wonderful Malian music in every public space.


UPDATE: ANOTHER PERSPECTIVE AFTER A FULL DAY

And what a day! A travel tip for this part of the world: be sure to print out your confirmed reservations for everything. None of the hotels or airlines have had records of my reservations. OK, that was today's travel tip.

What an amazing place Bamako is! Forget what I said about it reminding me of backwater Pakistan; that was just the fancy superficial sights! You can't imagine what this is like once you get out of the modern business/tourist ghetto. I keep imagining that Dogon country is going to be the most primtive place I've ever been to. The back allies of Bamako... well it makes Pakistan look like NYC!

But this place is the most pro-American place I've been to since Clinton was president. And it's more than just the predictable pictures of Obama everywhere. There are USA decals and stickers and flag symbols in taxis and all over the place. I saw more albinos than white people but there are a couple thousand French people living here. Still, it seems like it is the U.S. that has captured the imagination of the people. Feels good after years and years of everyone hating America everywhere cause the fucking rednecks, fascists and greedheads got Bush into office!

Anyway, I was all over town today. Taxis are cheap; anyplace in town costs either 1,000, 1,500 or 2,000; depending on a combination of distance, your bargaining skills and how willing you are to whore out some Obama stories. After a full day-- including the discovery of a fantastic Moroccan restaurant called La Rose des Sables, just down the street from the Chinese Embassy. One warning: "vegetarian" doesn't necessarily mean "no meat," only that there are vegetables in the dish.

The highlight of the day though was a trip to the studio where Mali's greatest muscian, Bassekou is recording his follow-up LP. This guy is great and what an amazing band he's put together. I'll do a post on that once I can upload some pics and music and after I see the live concert tomorrow night.
Posted by DownWithTyranny at 2:56 AM

Intense. That's interesting to hear the demeanor of the people. I just keep hearing about how wonderfully nice and outgoing Malian people are.

...Oh and did you lose the mosquitoes finally?

hmm... probably didn't show up correctly. Here is is split in two:

Did you go camping in the Dogon?

I remember my first day in Africa, It was when I won a ticket in viagraonline and this experience was so cool, I would like to do again it, so I feel so happy when I read this.