Bassekou-- Master Of The Ngoni-- Rocks The House 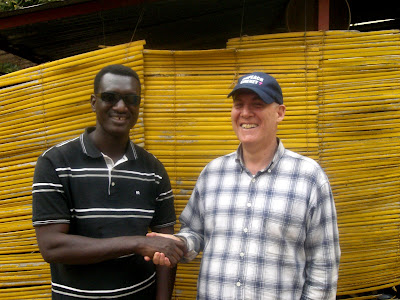 Thursday I went out to Quizambougou to watch Bassekou Kouyate finish recording his second album, a follow-up to his amazing debut, Segu Blue. Like the first one, the new songs were being recorded at the famed Studio Bogolan across the way from Mali K7, Ali Farka Toure's foundation. (Ali Farka's son, in fact, played his father's guitar on Bassekou's new album.)

Bassekou isn't well known in the U.S. yet-- he's never been to our side of the Atlantic-- but he's a real star in Africa and Europe, wildly popular in Mali and recognized as the best ngoni player in the world. The ngoni is kind of a cross between a banjo and a guitar and what Bassekou does with it is pure magic. The music I heard in the studio seemlessly combined the two goals Bassekou set out to accomplish with his new album: respect for Mali's rich musical tradition in which he is steeped, and an opportunity to explore the directions his own muse is drawing him. His first album Segu Blue is pretty amazing too.

I did my best to persuade him to come play in the U.S. and made a fun suggestion to help him gain some recognition there. If he follows my advice you'll recognize it instantly when you hear the album.

I had an opportunity to meet two musical legends at the studio-- BBC presenter/musicologist/producer Lucy Duran, who is probably best known in the U.S. as the producer of President Obama's favorite album, Kulanjan by Taj Mahal and Malian kora master Toumani Diabate. (I might add that the ngoni player on that album was, of course, Bassekou.) Anyway, Lucy is the most credible producer of West Africa music anywhere, speaking the local languages and having worked on Toumani's own records as well as with Kasse Mady Diabate and with Yasmin Levy. The sound engineer she and Bassekou were working with was Jerry Boys, one of the world's best-- a guy who recorded everyone (literally) from the Beatles, Stones, Pink Floyd, and REM to Ry Cooder, Buena Vista Social Club and Ali Farka Toure! (I recall him working with Everything But the Girl when I worked at Sire.)

Anyway, the studio was packed with TV, radio and print jounalists, as well as photographers from the record label and the media. It's like everyone in Mali who loves music-- and in Mali that means everyone-- is eagerly awaiting the new Bassekou record. The happy citizens of Bamako didn't have to wait for the release to hear some of the new material. Friday night Basselou was onstage at the French Cultural Center doing a full-fledged concert. You think I went?

It was only about a mile from my hotel so I walked over early. Bassekou had told me his sons have an ngoni band and asked me to show up in time to hear them. I'm glad I did; you can see their influences and they were pretty good. 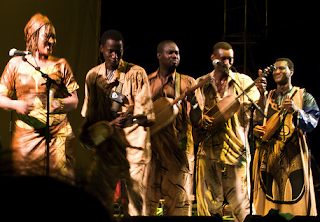 Bassekou with his band at CCF in Dakar
But it was Bassekou's nine piece extravaganza that well could have been the best live performance I had ever seen in my whole life-- and I've been seeing concerts since the early 60's and haven't missed too many artists. The first time I was in Africa was in 1969 and I was hanging out with Jimi Hendrix in Essaouira (in Morocco). The first time I had seen Jimi play was years before that at the Cafe Au Go Go when he was the guitar player in the Night Hawks, backing up John Hammond, Jr. I don't say this lightly: Bassekou Kouyate is the Jimi Hendrix of the ngoni.

I don't know how to describe the concert without losing the essense of what the music did for everyone involved-- both on and off the stage. Let me tell you, though, as magnificent as the recorded versions of his songs are, the live show is what makes it so amazing. The concert defined hot. When those syncopated rythms get going, there is no resisting their power. Mali is the birthplace of the blues-- and the blues is still very much alive and vibrant here-- and it is the ancestral home of rock'n'roll in every imaginable way. Bassekou has that coursing through his blood and he knows exactly how to convey it to the audience.

And the dancing was as good as the music! Absolutely breathtaking! Truthfully, I can't remember the last time music compelled me to jump out of my seat and dance in the aisle. Last night it did. If Bassekou and his band wind up on Leno or Oprah, they'll open America up to its own musical roots-- and I'll bet Bassekou will become a real superstar in the U.S.

Posted by DownWithTyranny at 3:56 AM

I'm curious to know- did you actually know when you planned your Mali trip that all this was in the offing, or was it just your special brand of esp that got you there at the very moment?

Truly great music Howie. And, you're right. the connection to the music here in the U.S. is obvious. I hope the masses here get the opportunity to hear it.