Bamako May Be Hot, Dusty, Expensive & Polluted, But They Sure Make Some Good Chow 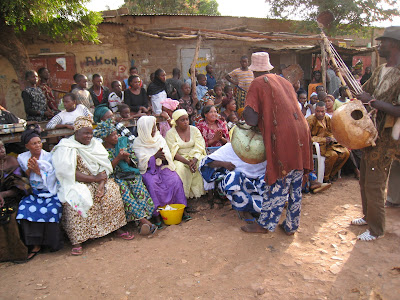 Party time in Bamako
Roland, who is always clamoring to go see nothing but filth, decay, degradation and abject misery-- that and all that is offered on the seamy side of life-- says Bamako is the worst city he's ever been to. He agrees with the guide books that say to use the airport to get to Mali and then head straight for Djenne, Dogon Country and Timbuktou. He's turned off in Bamako seeing people suddenly squatting down on the side of a busy street and moving their bowels. He's turned off seeing children playing in sewage and women "washing" their dishes in the city's open sewers. He's turned off to the dry, dusty 100 degree weather-- in the "cool season"-- filtered through a curtain of smelly, deadly exhaust fumes. He's turned off to being over-charged for water. Malians pay 300 CFA; last night the hotel charged him 2,000. (Normally tourists can get a bottle for something between 400 and 1,000 CFA but the high end hotels tend to be shameless cash vacuums, like in so many cities around the world.)

Neither of us is a big mosquito fan-- though we've both given up fighting that scourge-- and we're not partial to the stench this town has to offer. And neither of us is happy to be ripped off if we try changing dollars in a hotel or even a bank. By chance we stumbled into a Lebanese supermarket and they gave us 450 CFA/dollar (no commission) instead of the 400/dollar (plus a 2% commission) others offer. If you're counting, that means $100 in the hotel would get you 39,200 CFA instead of 45,000.

On the other hand, Roland seems happy enough taking taxi rides down back streets filled with decaying colonial buildings that remind him of Vietnam and Cambodia and we both love the fantastic authentic African cuisine. The expensive hotels all serve way over-priced crappy, boring French food. Two people would be lucky to get away for less than $70 for dinner at our hotel (without wine). But last night we had dinner at Le San Toro, a restaurant owned by an ex-minister of culture and tourism in a part of town called the Hippodrome (on Avenue Al Quds). The food is traditional Malian, as are the decor and music. I can't say enough good things about the food which was not only spectacularly delicious but also very healthfully prepared. It's also pretty inexpensive, a fraction of what you'd pay in the hotel joints. And the decor and the art is breathtaking. On top of that the live kora music we heard during dinner was excellent as well.

Speaking of food, it has been easier in Mali to eat well as a vegetarian than in most countries. Everywhere is was a synch explaining that I don't eat meat and instead getting a nice fresh heaping plate of cous cous or millet or fonio with veggies. Last night at Le San Toro I ordered a vegetarian plate and it included cous cous, a huge variety of vegetables, beans and bananas. It was so good I can't wait to go back! Roland had a goat stew, disappointed there was no gazelle or zebra on the menu-- nor even camel. I do have to admit, though, that I'm looking forward to having lunch at Guy Savoy, one of my favorite restaurants in Paris, in a few days.
Posted by DownWithTyranny at 2:15 PM

I am sorry but I have to disagree. I have spent 6 out the past 12 months in Bamako and Le San Toro is one of the very few restaurants I have eaten at that I will absolutely not go back for a second time. The service was incredibly slow and we were the only ones there. They didn't have half of the dishes advertised on the menu. The portions we had were really small AND overcooked. Finally, unless they have changed in the past year, you couldn't even have a beer or a glass of wine with your dinner.

You are spot on, however, about the hotels. Way overpriced and not very good.

Give San Toro another try. The service was very good and the portions were large (as well as delicious). Maybe you were just there at the wrong time or wrong day. We ate there 3 or 4 times and it was good each time. We're back in the U.S. now and we were just fantacizing about having dinner there again.