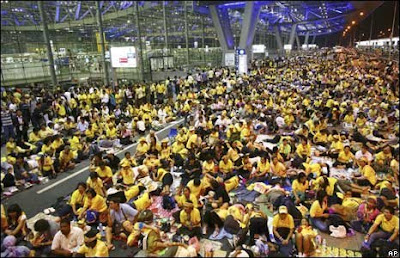 Thailand's welcome mat rolled back in
Last night Roland drove his friend to LAX. His friend bought a home and a business and is moving abroad, to a smiley, peaceful country we visit all the time: Thailand. When they got to the airport they were informed that there are no flights being allowed into Bangkok and that both its airports are closed. There are rumors of a military coup as protesters seem to have forced the government to have fled to Chiang Mai way in the north. Protesters say they will keep the airports closed down until the government resigns. The government says it won't resign. Government supporters are threatening violence.

Tourists would be flown by Thai Airways to Singapore or Malaysia for connecting flights, The Associated Press reported.

Government officials also said Thursday they would allow commercial airlines to use one of the military airports, U-Tapao.

Used by the United States military during the Vietnam War, U-Tapao can handle only a fraction of the daily average of 100,000 passengers who flew in and out of Suvarnabhumi International Airport last year.

U-Tapao’s terminal has the capacity to hold 400 people and the parking lot has about 100 spaces. The airport is about 120 miles from Bangkok, a two-hour drive.

There have been a couple of explosions and some gunfire at the main international airport and a few injuries, and thousands of stranded tourists. Normally, Thailand is one of my favorite places to go for a vacation. Reports from stranded tourists all seem to agree on one point: the airlines are hopelessly unhelpful. Tourists seem unsympathetic with the protesters-- or at least with their choice of tactics. I'm sure glad we picked nice peaceful Mali this year. Meanwhile, Roland's friend was offered a flight to Taiwan and one night free in a hotel and the best wishes of the airline that the airports will be open by Saturday. It could be worse; he could have been in Mumbai.

Posted by DownWithTyranny at 12:32 PM

Howie, I "tagged" you because TRex asked so nicely.

And, thanks for the post about Thailand. I've traveled there, though long ago. One of my students is from Thailand, and I will be very interested to hear what his take is.

Also, I am spending holidays in CT with my best friend from college. She travels to India often as part of her job, and again, I will be very interested to hear her insights as to the events there.