I Would Rate Mumbai, India As A Safe City To Visit Although It Wasn't Today 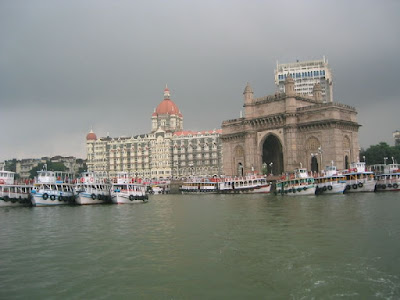 Gates of India on the right, Taj Mahal Hotel on the left
The first time I was in Mumbai, then called Bombay, was 1970 and I was so happy to be in India after driving for months and months and months across a far less hospitable western and central Asia. I was on my way to Goa in my trusty VW van. I only stayed in a hotel once in the whole 2 years I was on the Indian subcontinent and it was at the very end of the trip. In Bombay I slept in my van right at the Gates of India in the shadow of a hotel I came to stay at many times years later, the Taj, sight of some of the worst of today's violence. It usually gets rated as Mumbai's most luxurious and prestigious hotel. Last time I was there Roland was taking a shower when there was a power blackout. There was no electricity, of course, and something very odd happened. The water in the shower turned to sewage. [A similar thing, although it was thankfully a sink and not a shower and there was no contact, happened to me at New Orleans' best hotel, the Windsor Court, but they gave me a coupon for two free nights to assuage their embarrassment. The Taj knew no embarrassment and we were forced to walk up and down countless flights of stairs several times.]

Today Islamic terrorists dealt a severe blow to India's tourism industry by attacking the Taj, the Oberoi and several other top of the line tourist spots, killing an unspecified number of people-- looks like over 100-- and holding others hostage. The situation is still fluid as I write. Americans and Brits were especially sought out among the hostages and then shot.

Posted by DownWithTyranny at 2:50 PM