WHY NOT STAY AT THE BEST? I'LL TELL YOU-- AT LEAST IN REGARD TO BUENOS AIRES' PARK HYATT HOTEL 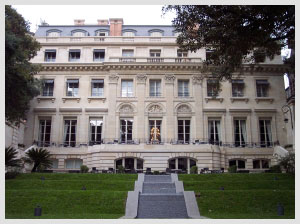 A lot has changed in my life. When I first started my travels I was hitchhiking and sleeping wherever I could find a free spot to curl up. I remember as a teenager having a step (on a steep staircase) in a Haight Ashbury crashpad I could call my own for a week. I never even imagined there might be something better. Come to think of it, there probably wasn't-- not for this person at that time in that place. But as Fate bumped me along in life, many things did change substantially and one was my ability to afford to stay anyplace I want. Especially as the president of a large corporate record label I started getting used to my corporate expense account and what it could get me in terms of amenities. It became easy enough to justify staying in the most expensive hotels and eating in the very best restaurants in order to make an impression on business associates. (That worked out well, except healthwise, where all that rich food doesn't do anyone any good.)

Anyway, long story short, I long ago went from sleeping in a crashpad to sleeping at a 4 Seasons or Ritz. My old Warner Bros corporate travel agent still helps me with reservations-- bless her heart-- and she has a tendency to push me into old habits... not that I'm all that resistant. When I was planning out my Argentina trip, she kept telling me that the best hotel in this town and that town was below my comfort level. Actually, all of them were just fine. And some of them were superb, like the Posada de la Laguna in that wetlands I visited.

When I first got to Buenos Aires I rented an apartment-- and I'll write about that experience next week when I'm back home-- but the minimum for an apartment rental is a week so when I flew back to Buenos Aires for a few days here and a few days there in the middle of my stay in South America, I stayed in hotels. First up was the hotel of preference for the music industry, the Caesar Park in Recoleta, a block from the apartment I had rented. It was luxurious without being over the top. And the staff was down to earth and friendly. It's owned by a Mexican chain and I found it a very simpático place.

My wonderful travel agent had convinced me, however, to spend my last few days-- after returning from the rigors of Tierra del Fuego and before returning to L.A.-- in the "best hotel in Buenos Aires," the Park Hyatt. This was a big mistake for me. It's a temple of conspicuous consumption. I checked in... and checked out. Let me tell you why.

First let me say that the rooms and public spaces are absolutely gorgeous and top notch, as good as any Park Hyatt anywhere (and don't mix up the Park Hyatts with any other kind of Hyatt-- night and day. The Park Hyatt in Tokyo was my favorite there and the Park Hyatt in Hamburg has been tied for my favorite there, though both, I might add, were paid for by my company.) The price, including tax, even after a corporate discount rate, is $460/night, about the same as a week for the apartment down the street and almost double the price of the Caesar Park. Now, granted, the rooms are way fancier at the Park Hyatt-- but not double fancier. But that isn't why I checked out so fast.

The Park Hyatt is primarily one thing: America in Buenos Aires. They have done everything they could to make the hotel as comfortable as possible for people who aren't particularly capable of cultural emersion. This is like Buenos Aires on pablum. And those were the kinds of people it attracted. I've been in Argentina for over a month and this is the first hotel where I heard more English-- American accented English-- than Spanish. And the place positively reeks uptightness in every way. I hated it. I actually hated everything about it (except for the giant monitors on the computers in the business center).

On top of that, the rush to make it a technological wonder has left it difficult in terms of functionality. It took me an hour to figure out how to operate things like the lights and I never did get the phone system down! (Which is just as well, since the one call I managed to make-- a local call that would have cost me 30 cents anywhere else, cost me $2.00 there, nice and American: lookin' for profit centers everywhere. No one in their right mind other than an American with money to burn would stay at this place.) Nice gigantic big screen TV that came on to CNN no matter what you were watching when you turned it off though. But simple little things that turned me off to the hotel were the fact that it was noisy as hell and that I couldn't get to sleep 'til after 2 AM, even though I was on the 9th floor. (I think some Argentine team had won a soccer match and it was another excuse for noisy parties in the streets. And Argentine teams win soccer matches every day or two, believe me.) Even worse was the exquisitely appointed baño. Yes, the bathroom is gorgeous; unfortunately everytime the upstairs neighbor used his, you were treated to a symphony of plumbing-related noises in my room.

And at check in I was informed no late check out (my plane leaves at 10:30 PM so that's a real inconvenience), no breakfast included-- probably the only hotel in South America with this policy-- and, of course, no upgrade, something I can always live with. Fortunately, my pals at the Caesar Park, approximately 40 steps down the street, had offered me an upgrade to a suite and the far more important late check out (not to mention their lavish breakfasts). So here I sit, in the Caesar Park business center where my old pal Diego, the business center manager, makes a great research assistant for my Down With Tyranny blog. And at half the price. And with no corporate expense account... well, everyone loves a good deal.


UPDATE: WHEN IT COMES TO RESTAURANTS, ON THE OTHER HAND, BUENOS AIRES' BEST DO NOT DISAPPOINT

Argentina is blessed with a very high quality of food-- lots of delicious fruits and vegetables, the best meat in the world, great seafood. Whenever I go to a grocery store and ask if they have organic stuff I'm usually told most of the fruits and vegetables are raised without chemical fertilizers. I don't know if it's true or not, but it sure gets repeated all the time. As for the restaurants, the level is generally pretty high. Every European tourist I talk to mentions that the food is way better than what you get back home.

I'll do a report on the health food restaurants of Buenos Aires in a few days. But I did want to mention a couple of haute cuisine places I've discovered in Buenos Aires that everyone should try out. Because they are all catering primarily to middle class Argentines-- rather than tourists-- the quality is superb and the prices relatively low (think of a peso as a dollar in terms of buying power-- and we get three pesos for a dollar). Portions in Argentina always seem huge. These people enjoy their chow and they serve lots of it. So we're talking about high quality, low cost, big portions.

Now when we get to the best restaurants in town, we're in the realm of stuff worth writing home about. Started-- and still run, 30 years later-- by 2 sisters, Tomo 1 is generally considered the best restaurant in Buenos Aires. It's in the Panamericano Hotel near the Obelisque (a kind of town center in some ways). The philosophy of the restaurant is really simple: buy the best and freshest ingredients, prepare them with loving care and skill (one sister does lunch and the other does dinner), make sure everyone concerned is thoroughly professional. I ate there last night. The philosophy works. Everything was mouthwateringly delicious, including a sample of the absolute best tomato soup I had ever tasted, an endive and pear salad I would like to eat again right now and a fish I had never heard of, a "lemon fish." The waiter told me it's in the tuna family and the quality is that of sashimi. Completely scrumptuous! 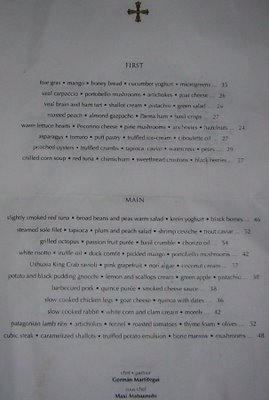 Just as good-- some say better-- is a less "establishment" restaurant in Palermo, Casa Cruz, where I ate a couple weeks ago. This one was more about combining ingredients into artful ways, artful, unique and delightful. I tried getting another reservation for my last dinner in Buenos Aires and, as usual, it's booked solid. My suggestion is that anyone coming to Buenos Aires make a reservation asap for Casa Cruz. I think I tucked away a menu in my luggage and when I get home I'll photograph it and append it to this report.


UPDATE: I NEVER WENT OUT CLUBBING IN BUENOS AIRES, BUT THERE WAS ALWAYS SOMETHING GOING ON

Sunday's NY Times gets right down into it, at least from an ex-pat point of view.

“There are expats everywhere tapping into the city’s thriving cultural and arts scene,” said Grant C. Dull, Zizek’s founder, who also runs the popular bilingual Web guide WhatsUpBuenosAires.com. “And it’s not backpacker types, but people with money and contacts.”

Drawn by the city’s cheap prices and Paris-like elegance, legions of foreign artists are colonizing Buenos Aires and transforming this sprawling metropolis into a throbbing hothouse of cool. Musicians, designers, artists, writers and filmmakers are sinking their teeth into the city’s transcontinental mix of Latin élan and European polish, and are helping shake the Argentine capital out of its cultural malaise after a humbling economic crisis earlier this decade.

...Comparisons with other bohemian capitals are almost unavoidable. “It’s like Prague in the 1990s,” said Mr. Lampson, who is perhaps best known for winning a Bravo TV reality show, “Situation: Comedy,” in 2005, about sitcom writers. Despite his minor celebrity, he decided to forgo the Los Angeles rat race and moved to Buenos Aires, where he is writing an NBC pilot, along with his Web novela, www.historyandtheuniverse.com. “Buenos Aires is a more interesting place to live than Los Angeles, and it’s much, much cheaper. You can’t believe a city this nice is so cheap.”

Posted by DownWithTyranny at 6:52 AM

amazing variety of choices on the menu / goodness, where to even begin ? i want to copy it and duplicate some of them as a foodie challenge / i like so much that your food reports are so specific / smile / from one foodie to another / buon appetito and happy landings

Skaterina, the warm lettuce hearts salad and the steamed sole were completely amazing and memorable. If you prefect either, please invite me for dinner!

I am so happy for you that you found the food so great in Buenos Aires. I have lived here for 3 years, and unfortunately I find the food boring, uncreative, and, except for the meat, tasteless. How can you say that Europeans find the seafood the best ever? Unbelievable. The national fish is that disgusting merluza, which I wouldn't touch with a ten foot pole. Hey, I'm from California and I miss my tasty food. But then I live in Boedo and eat where the locals eat. I shop at the Argenchino supermarket and avoid all Argentina pizza. And, I carry my own black pepper with me!