ONE OF THE THINGS ABOUT TRAVEL... YOU MEET ALL KINDS, EVEN BUSH SUPPORTERS

I started the AroundTheWorldBlog because readers of Down With Tyranny would grumble whenever I'd write about my travel experiences. On the other hand, I always get nasty comments whenever I mention politics on this one. So I was trying to figure out which blog to put this one on. I have to admit I'm not certain where it's going to end up as I sit down to write it. It's almost a truism to say that you meet interesting and worthwhile people when you travel, people with diverse opinions and points of view. Yesterday I actually met two people, unconnected to each other in any way whatsoever, who both admire George Bush. Although I once made friends with a Vietnamese kid in Ho Chi Minh City who was too polite to admit he detested Bush without a good deal of prodding, these two are the first I ever met overseas who really and truly thought Bush is a good president.

The first one, an Australian marine engineer (he works on a boat), was so appallingly stupid that he was unable to figure out how to get into Brazil. I met him at the Buenos Aires airport, both of our planes having been delayed for hours and each of us passing the time in the airport locutorio. I don't remember his name; it might have been Pete. He told me that he had flown to Sao Paulo from Madrid, part of those long, zig-zaggy trips round the world Ozzie's are always in the middle of. Because Australia has as big an oafish and pig-headed national leader in John Howard as we have in the U.S., Australians are the other nationality who have to jump through hoops to get into Brazil. Pete wound up in a detention center and was nearly thrown back onto a plane for Madrid. Someone took pity on him and sent him off to Buenos Aires. His plane back to Cairns leaves from Sao Paulo. I explained how he could get a Brazilian visa in Buenos Aires but he had already decided to try to sneak across the border in Iguazu, something which many people do and which usually works. But not always.

Anyway, I just happened to mention that the Brazilians don't allow Americans and Australians in easily, the way they let Europeans and Argentines in, because our two national leaders have made it so hard for Brazilian tourists to come to our countries. I used an adjective or two to describe Bush and Howard. Oy! Did that set off a firestorm! Pete is like a posterboy for racism and within a second he was on automatic, spewing every bit of stereotypical nonsense you ever heard about "spear chucking cannibals with bones in their noses" (exact words) flooding into Australia and changing the place. Imagine that! He worships Howard for his strength-- and because Labor would give everything away to the spear chucking cannibals (including advance fighter jets). I was finally able to calm him down and get him to talk about man-eating seawater crocodiles, something Australians like talking about even more than John Howard, although he eventually got into a rant about how the spear chucking cannibals and Chinese flood into northern Australia by boat and are all eaten by the seawater crocodiles. 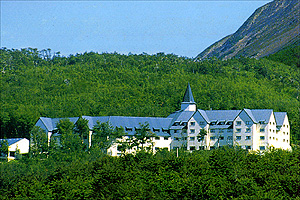 The manager of the hotel I'm staying at in Ushuaia, Las Hayas, is far more genteel and sophisticated. I couldn't imagine Alec ever getting thrown into a detention cell and deported somewhere. While I was writing about the seawater crocs eating Chinese immigrants he introduced me to Prue Leith, founder of Leith's, one of my favorite London eateries. She was just checking out of Las Hayas to take a Russian icebreaker to Antarctica.

Alec is a veritable fount of conventional wisdom. This morning he told me how Ushuaia experiences all four seasons each day (although it's nearly 5PM and today we only had what I think of as winter, cold, rainy grey winter). When it comes to politics, though, he's like one of those founts of conventional wisdom who listens to Rush all day and when you press the right button... out it comes. Our first conversation started with him telling me how Bush fights hard for America and how he's really a good president for the U.S. Of course I calmly disabused him of that notion and explained that Bush is the absolute worst president America has ever had and that he has done nothing whatsoever for the U.S. except bring it down. Alec had a lot to say about Argentine politics as well, of course, and he introduced me to a delightful new word, "rabanito." It's the word for radish and when an Argentine applies it to a person, he's refering to someone red on the outside and white on the inside. The genesis of the word was a Cuba-loving soccer coach, César Luis Menotti (1978 World Cup winner) who loved rolexes and fancy cars as much as he loved Castro and Che.

Meanwhile, by the way, I'm taking notes about Tierra del Fuego and I'll do a piece on the hotel, the restaurants and all that. It's a pretty classic tourist trap, well on it's way-- though not there yet-- to being spoiled by commercialism. You can see how Ushuaia is turning almost Disneyland-like in its headlong rush to cater to more and more tourists who come for the one real attraction-- it's remoteness, something which, of course, is disappearing. The vistas are undeniably spectacular. Everywhere you look is just breathtaking, except when you look at the expanding town itself.

The kinds of people who travel abroad tend to be relatively open-minded. Mostly you meet liberals, not conservatives. Conservatives are, by nature, distrustful and afraid to travel to foreign places, afraid of strange food, strange cultures, incomprehensible languages, afraid of the uncertainties of traveling outside of the U.S. (I always notice that Americans, unlike any other people, seem to be greatly put off when people speak something other than English. Americans seem to assume people are talking about them-- or plotting to blow something up-- if they hear a "foreign" language.) Anyway, a good 75% of the Americans I meet on the road are non-conservatives. It's nice, you can almost bond with anyone by denouncing Bush. 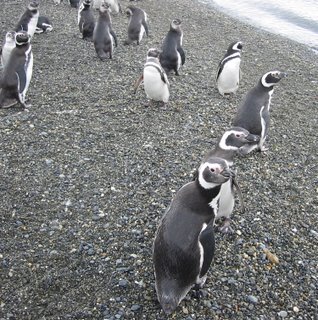 Yesterday's trip to penguin island was an 8 hour expedition with 12 people, half of whom spoke English and half Spanish. The English speakers were yours truly, a British guy in his late 20s finishing up a 6-month sojourn through Latin America and a family of 4 Coloradans just back from Antarctica. The husband was outgoing and friendly, if a bit loud and pushy, but within 5 minutes of meeting him he seems to have taken offense that I referred to Tancredo as a cretin and a fascist. His wife's vibe was 100% right wing dragon lady. My attempts at non-partisan friendliness were not returned. Instead, they insisted on opening the bus' windows to let in the "fresh air," which never got above 40 degrees. After the 8 hour trip they tried to pressure the guide and driver into extending it by several hours by going to a forbidden area, regardless of the fact that no one else on the bus wanted to go anywhere but home (not the least of which, to escape all the fresh, near freezing air they made sure the bus was filled with).

The English guy told me he is a Conservative but we got along fine and I was eager to figure out why someone in England in the 21st Century would ascribe to conservatism. He was unable to enlighten me, knew very little about where the Conservative Party stood on any issue ("I've been out of the country for 6 months," was his excuse) and, other than his loathing for Tony Blair and his worship of Dame Thatcher, he seemed to ascribe to reasonable positions on all the issues he described as being important to the British electorate: immigration and integration into Greater Europe.

Everyone else I've met down here from the U.S. seems to be a Democrat or, at least, anti-Bush. This even though it's pretty expensive to travel in this part of the world unless you want to backpack and stay in hostels.
Posted by DownWithTyranny at 10:37 AM