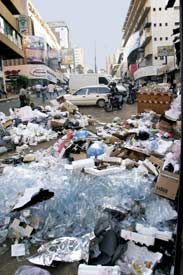 A few days ago I was marvelling at the squalor and backwardness of the road from Iguazu/Ciudad del Este to Asunción. It reminded me of India-- a jumble of shanties up against an ill-maintained highway with sorry looking people and their animals wandering around randomly and with garbage and filth everywhere. That was Ruta 2. There's another way into Paraguay: Ruta 1, from Posadas, Argentina, another port of the mighty Paraná River. I took a bus from Asunción to Encarnacion, the Paraguayan city across from Posadas. Once the bus had left behind the slums that ring Asunción-- I was just reading that even in the U.S. there are more people living in poverty in the suburbs than in the cities and the slums of Paris and most European cities are well away from the centers and this seems to be the case in this part of Latin America too-- Paraguay took on a decidedly different look. The communities seem well looked-after, even prosperous. The tropical savannah mixed with jungle gave way to rich grasslands and the hodgepodge habitations along Ruta 2 were replaced by well-planned little towns along Ruta 1. 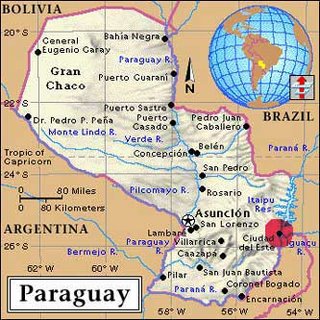 The people looked better. And so did their animals! It smelled better too and I didn't see any garbage strewn along the road in the whole 5 hour trip. It was like night and day. And Encarnacion also has the air of a propserous and decent little port/border town, rather than the threatening bandit refuge Ciudad Del Este appeared to be. (It's also filled with Arabs, more so than any other town in the area, and I hear the FBI has been there in force looking into "terrorist" connections.)

I took a city bus from Encarnacion to Posadas. I paid 2 pesos (.65) and the short trip included a stop at Paraguayan customs on one side of the Paraná bridge and at Argentine customs on the other side. It was smooth and relaxed and no one asked for an exit fee, although I guess that's just at the airports. Nor did the Argentines make me fill out all the pesky paperwork you have to fill in when you enter by air.

Posadas is the capital of Missiones Province. I think there are a 250-300,000 people in the city. After Paraguay, it feels like I'm back in the 21st Century. It's 100 degrees though. And humid. I'm not a huge fan of this kind of weather but there's something I like even less-- freezing airconditioning which always strikes me as supremely unhealthy. The buses in tropical places are bonechillingly cold and dry-- and filled with sick people sneezing and coughing. No one ever told anyone to cover their mouths. (This especially bothers me at buffets.)

I'm staying in Posadas' only 4-star hotel, Julio Cèsar. It costs $35/night-- no corporate discount-- and the gap between 5 stars and 4 stars is considerably greater than the gap between 4 stars and 3 stars. But the sheets are crisp and clean and there is a ceiling fan (as well as the airconditioning I would never use). It's a decent enough place and, in fact, the swimming pool looks a lot better than the one of the roof of the Sheraton in Asunción (which was so filthy that it was unimaginable that anyone would ever use it). Breakfast buffet is always included in the hotels and the one today was more modest than the ones in the 5 stars, but there was fruit, which is all I eat anyway. I was a little put off when some slovenly young woman with her 7 or 8 year old on her hip walked up to the buffet, the child coughing deeply and the woman sneezing heartily right into the basket of bread.

Last night I made a deal with Roberto, a Swiss-born Argentine, to get me to Iberá in a 4 wheel drive and pick me up in a few days and drive me back. Roberto is a personable dude who speaks great colloquial English-- "American films," he told me-- and has a travel agency catering to tourists who want to make the circuit of ancient Jesuit monasteries in this area and who want to get to Iberá (to which there are no paved roads or public transportation). I expect to be away from computer access for a few days but I'll write about Iberá when I get back to Posadas next week.

In case you ever wind up in Posadas, il Diletto is the best restaurant in town. The mixed salad was totally killer and HUGE (and only $3) and I also had some baked river fish (surubí) with potatoes and a whole lot of melted cheese. I'm looking forward to another one of those salads when I get back here next week.
Posted by DownWithTyranny at 2:53 AM

Hi Howie, are you going to come back to Asuncion after Posadas or wich one will be your next trip? I leave you a comment in your "First impression about Paraguay" post.

What an adventure Howie! and it's so cool to get to ride along this way.

We miss you - but what a great way to unwind from all your amazing election work - kick back and enjoy!

Hi Howie, good to meet you at the Posada - we`ll probably read your next post so no rude comments about those dreadful English people you met! We`ll post some photos on our blog at www.planetranger.com/colinandsue.
Happy travelling. Colin and Sue.

Colin and Sue, it was so nice to meet both of you at the lodge. Thanks for finding Around the World Blog and posting. I took no photos there at all except for the ferocious alligators and those wild capybaras so I can't wait to see your pictures. I'm sure the readers of this blog would love to see 'em too. I'm back in Posadas now, where it must be 110 degrees.

Skaterina, eating well is no problem at all, although I'm not as fanatic as I am at home. I don't eat meat, flour products or sugar but the raw thing is on hold more or less, although I have managed to eat fresh fruit for breakfast and have at least one salad a day. At Posada de la Laguna, where I met Colin and Sue, I alerted the proprietess a few days before I got there about my dietary restrictions and every single meal was a delight. Her son is a big time chef in Buenos Aires and he taught the cook at the lodge plenty of great veggie dishes to prepare. I would give the meals an A-plus (in terms of both taste and healthfulness). I'll write more about the Posada de La Laguna when I'm back in L.A. and can manipulate links and add photos.