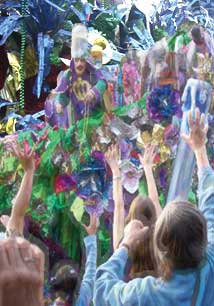 Michael Snyder is an old friend of mine from San Francisco-- as well as a talented writer, discerning critic and celebrated raconteur. He's the Around The World Blog go-to person for all things New Orleans. And he just returned from there and wrote up a report anyone interested in visiting post-Katrina New Orleans will want to read.

It's more than a bit broken. But New Orleans and its people are unbowed, and I had a tremendous time there this past weekend.

Yep, I'm back in San Francisco after my usual early-Carnival sojourn to the Big Easy. It was exhilarating, exhausting and left me feeling a little melancholy. And I wouldn't have missed it for anything.

The areas of town that are geared to entertainment -- the French Quarter, the Marigny and the Garden District -- are fine, although you can see evidence of repairs in progress, and some places (such as the Acme Oyster Bar) have yet to reopen due to personnel shortages. The first parades ran (albeit a little scaled-back) with a slew of cuttingly satirical, and brutally-topical floats, and beads and doubloons a-flying; the parties rocked, especially the annual all-night bash at Jamie's warehouse (a wild menagerie of fun-loving, incredibly creative people in beautiful, sexy and/or hilarious costumes); the food was exquisite (i.e. dinners at Irene's, Adolfo's and NOLA; beignets at the Cafe Du Monde; and some libations to delight: Restoration Ale and Carnival Bock from Abita, and the Chocolate City Stout from Crescent City Brewhouse); the Krewe of Barkus doggie parade went off without a hitch on Sunday afternoon as canines and their owners, done up in hilarious fashion to reflect this year's theme "The Wizard of Paws," strolled the Quarter to appreciative crowds; and my friends -- those who stayed or returned, and those I only just met -- were as gracious, warm and welcoming as ever.

I don't want to forget the music and clubbing I did: There was some eloquent small-combo chamber jazz from pianist Ellis Marsalis, the patriarch of the musical Marsalis clan, at Snug Harbor; techno-house dancing at Oz; the Bob French & Friends jam session Monday night at Donna's with the great Kermit Ruffins -- the Satchmo of the modern era -- sitting in on trumpet and vocals, and the brilliant humorist and comic actor Harry Shearer kicking back at the bar; and an ass-whuppin' midnight show by Nashville Pussy (X-rated, trailer-trashy Deep South metal-punk) at the best rock club in the Quarter, One-Eyed Jacks.

A mordant sense of humor was in evidence, no matter where you went. The Krewe of Carrollton dubbed its parade "Blue Roof Blues," in reference to the omnipresent blue tarps that FEMA used to cover houses left open to the elements by the storm; they recycled old floats to fit the "blue" theme. So, to pay tribute to the Blue Man Group, they took a float that was previously used as a tribute to Gandhi, completely spray-painted the bald figure at the front of the vehicle in a rich shade of blue and -- Voila! Hairless spiritual sari-wearing pacifist becomes freaky, post-modern performance artist!

And the novelty T-shirts, at souvenir shops from Bourbon to Decatur, were particularly prickly: a "Girls Gone Wild" shirt with the meteorological symbol that represents a hurricane duplicated under the names "Katrina" and "Rita"; a FEMA shirt that spelled the acronym "Federal Employees Missing Again"; a New Orleans Police Department shirt that said "Not Our Problem, Dude"; New Orleans Mayor Ray Nagin, Louisiana Governor Kathleen Blanco and Jefferson Parish President Aaron Broussard depicted as the Three Stooges; and my favorite, which takes the poster art for the recent film "Willy Wonka & the Chocolate Factory," and replaces star Johnny Depp's face with Ray Nagin's, alters the background to a post-Katrina NOLA skyline, and the title to "Willy Nagin & the Chocolate City -- Semi-Sweet & a Little Bit Nuts." Anger transformed to humor.

This is not to diminish the tragedy. Parts of the city are devastated. For instance, I made it over to the periphery of the Ninth Ward, and even now, it looks like a bomb went off and laid waste to everything. Although it will take years (and a much better series of levees) before those neighborhoods are back to something approaching they're previous condition (or hopefully, something better), there are clean-up crews and builders who are toiling every day with the determination to resurrect and improve upon that which was destroyed.

New Orleans will survive, and it's ready to accommodate those who love it, or will love it if they visit. It's a national treasure, and it needs us. I encourage any and all of you to go there and support the most unique, exotic and seductive metropolitan area in North America.

There are a few more days left until Mardi Gras. And how about Jazz Fest in April? It's coming up, and it's a music-lover's dream. I'm just sayin'...
Posted by DownWithTyranny at 9:33 AM