THAILAND IS A REAL TOURIST PARADISE. BUT IS IT ALSO A FASCIST DICTATORSHIP ? WELL... IS GEORGE BUSH'S AMERICA? 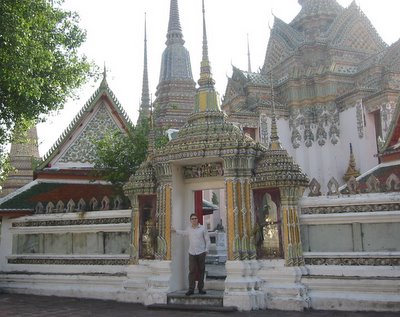 My original impetus for starting the Around The World Blog was that I wanted to write a restaurant guide of Bangkok. I still haven't gotten to Thailand, but, of course, I haven't forgotten. I was thinking I'd finish up on the series I'm doing on Bali and then get to Thailand after that. But this morning I got an e-mail from a friend in Thailand, T., and it... shall I say inspired me to write something about one of my favorite places on earth. I can't believe that the first thing I'm going to write about Thailand, a place I've been to a dozen times, is going to be something negative. Not just something negative but something that barely even impacts on tourists in any way at all-- at least not directly.

If you've been following this blog at all, you may have noticed that I rarely mention the politics of any of the countries. I save that kind of stuff for Down With Tyranny, my political blog. But T's letter got me thinking. I was in Thailand several times when Thaksin Shinawatra, the current prime minister, was running for office. He's a Thai version of Italy's Silvio Berlusconi, the richest man in the country, a populist who thinks rules and laws are for other people, not for him. His elections, particularly his re-election one year ago, were rife with fraud.

T. wrote that "In Thailand the PM spent the past two years re-shuffling the army [he put in his less than qualified cousin as commander-in-chief], destabilizing the courts, bribe-packing the senate, rushing through odd loopholes; and now, he just sold the national satellite, phone company and BBC to Singapore-- All profits in his pocket, all legally within the newly minted laws. And no chance of a last minute coup or even election to put it all right."

Thaksin always gets compared to Berlusconi-- a whiff of fascism-- but lately people are also seeing a resemblance to George W. Bush. Like Bush's Republican Party, Thaksin's Thai Rak Thai party once again proved Stalin's famous dictum: "It isn't who votes that matters, it's who counts the votes." And in 2005 Thailand had an awful lot in common with Florida and Ohio, with plenty of Katherine Harrises and Ken Blackwells. Last year even as mild-manner a bunch as CNN accused him of being a dictator and in July the very establishmentarian ECONOMIST wrote "THAKSIN SHINAWATRA'S shrillest critics have long depicted him as a dictator and a bully. Now the Thai prime minister has the legal powers to live up to the insults. An emergency decree signed into law on July 17th allows him to detain suspects without trial, tap phones, ban public gatherings, expel foreigners and censor media reports that could adversely affect state security, peace or public morality.…"

Bush's catastrophic (non)-response to Hurricane Katrina, the grotesque incompetence of the lackeys and cronies around him, was also something that everyone compared to Thaksin's response to the tsunami that devastated so much of southern Thailand. The American Prospect talks about how Thailand's corrupt and incompetent dictatorship really has impacted on the lives of its citizens. The writer, Josh Kurlantzick talks about a recent trip to Thailand
"when the country was threatened by a major outbreak of avian (bird) ﬂu, which was spreading across Asia at the time. As with the tsunamis-- and with the previous SARS epidemic in 2003-- Thailand’s increasingly authoritarian government, run by Prime Minister Thaksin Shinawatra, initially denied that anything was wrong. Thailand’s neutered press and civil society, threatened by the government and co-opted by Thaksin, whose family has bought into important media outlets, essentially played along with the bird-ﬂu cover-up. Civil servants also said little, even as the crisis worsened. (Over the last four years, Thaksin has replaced or retired most independent thinkers in the government.) And even when the government began to admit the scope of the virus (after several Thai children had already died), Thaksin had created such a culture of top-down rule that important ofﬁcials seemed paralyzed, unable to decisively launch a cull of potentially infected birds."

Everyone who goes to Thailand who I ever met come away thinking about the Thai people as the sweetest, kindest, most polite and accommodating people they've ever met-- and with good reason. So it's difficult ti imagine these smiling, gentle, peaceful, easy-going Buddhists as having anything to do with fascism. It's a juxtaposition that doesn't compute. But it's a very rich country with an awful lot of very poor people-- and not a whole lot of very, very rich ones. Thaksin represents the interests of the latter and has been very adapt at placating the former with empty verbiage. The unique Thai social contract is fraying around the edges a bit.

OK, that's it for politics and Thailand for me (although I just did find this really interesting post from a Thai website called Fringer on which Mr. Fringer has also been very viscerally struck by the rather unpleasant similarities between Thaksin and Bush and their authoritarian propensities). From now on I'll just be reporting on how much I love Phuket, how much I used to love Koh Samui (pre-airport), how much I love Bangkok, Chiang Mai and every single place I've ever been in Thailand.

Last night the odious Tom DeLay said he would resign from the U.S. House of Representatives. Now it turns out the equally corrupt Thai Prime Minister is also bowing to public pressure and leaving office. Sunday's elections-- even as rigged as they were-- dealt Thaksin a stunning blow. If only George Bush would follow suit!
Posted by DownWithTyranny at 1:43 PM

Email ThisBlogThis!Share to TwitterShare to FacebookShare to Pinterest
Labels: Thailand

Good luck Mr. Klein! Do you dictate all these words or do they just flow out of you?! You are right on Delta Skymiles, buddy, and Delta airlines as a whole. The community pride Atlanta had in Delta has all faded away in the last decade.

All the best, your reader, Steve Barton

I have been living in Thailand for more than two years. I hope your statement is an eye opener for Thai people. I realy love the country. It hurts me to see the recent political developments.