BANGKOK IS VERY FAR AWAY-- BUT THE FOOD MAKES THE TRIP WORTHWHILE: A GUIDE TO FINE DINING 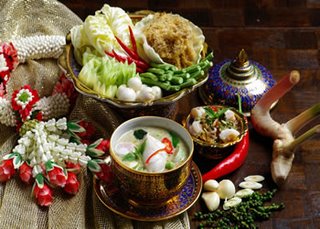 When I was 15 I hitchhiked across the country-- from Brooklyn to Los Angeles. I was on my way to Tonga but I never made it past San Pedro Harbor. I got all the way to L.A. in less than a week and most of the trip was in a nice new Cadillac driven by a sailor named Howard (like me) for a rich man moving from Philly to L.A. (also named Howard; but I never met him; he flew). Howard, the sailor, was a bullshitter but I didn't know what that meant at the time. As we were driving across Texas he told me he had eaten Chinese food in Peking and Canton and Shanghai but that the best Chinese restaurant in the world was in Amarillo and we would be there in an hour and have lunch there. Coming from a Brooklyn I was, of course, a connoisseur of Chinese cuisine. That's when I discovered Howard was full of it. I didn't have to taste it-- it was like canned Chungking or something-- before I realized I'd been had. As soon as I saw the baskets of rye bread (with butter) on the tables I knew what was in store for me. I suppose if I hadn't grown up in a Jewish neighborhood, where Chinese food was more common than gefilte fish or latkes, I might have fallen for Howard's nonsense.

Now, unless you live in one of the 4 or 5 biggest American cities you might be clueless about Thai food. But I'm not going to steer you wrong. In fact starting this blog began as an idea for doing a restaurant guide to one of my favorite cities in the world: Bangkok. I lost track of how many times I've been there sometime after the tenth time. And one of Bangkok's big draws for me is the incredible cuisine. Bangkok has wonderful restaurants serving food from all over the world, everything from nutritionally worthless, cardboard-tasting American fast food to exquisite sampling of haute cuisine from Switzerland, Italy, China, India, Vietnam. They even have Mexican food now. I'm just going to write about Thai food today.

Cumulatively, I've spent months and months in Thailand. I'm an adventurous eater and I love to eat. So, of course, I've searched out the best Bangkok has to offer in the way of restaurants. And they do have a lot to offer! If you like fresh, flavorful, spicy food, chances are you'll like Thai food. If you like bland and unstimulating food, this isn't the cuisine for you though. Early on I learned about something called "Royal Court Cuisine." The recipes have traditionally been closely guarded secrets and the only genuine royal court cuisine chefs all learn how to cook in the royal palace kitchens. I'm not sure how much of that is myth and how much is fact, but I can tell you that there are only a small handful of restaurants serving the exquisite and unique delicacies that make up this kind of cooking. In the last couple of decades more and more of the recipes have crept out onto menus of some of the tourist restaurants, especially in the luxury hotels and these days you can experience a royal court cuisine dish without too much trouble.

For as long as I can remember my favorite overall Thai restaurant has been Bussaracum, always perfect even as it moved its location time and again over the years, from a classic old Thai mansion to a hotel to another old house to an office building. It's always my first culinary stop when I get to Thailand. It was my introduction to Royal Thai Cuisine. It is academically authentic and very serious about what it presents-- oh, and mouth-wateringly delicious. The prices are extremely inexpensive for a tourist eating in a first class restaurant. And even a budget-restricted tourist can easily afford to try this place-- especially the incredible all-you-can-eat buffet lunches. It's a nice healthy walk from all the big river side hotels-- about a third of the way to Patpong, the Disneyland-like, family-oriented red light district that so many western tourists delight in-- and is just down Pan Rd from the big Hindu temple on Silom. The food you'll find here is not food you'll find on the menus of western Thai restaurants (or in the non-Royal Court Cuisine restaurants that are on every street in Bangkok). It looks stunning and tastes even better than it looks.

One of the old locations for Bussaracum is the Dusit Thani Hotel at the foot of Silom at the end of Patpong (Rama IV). It's the most Thai of all the big luxury hotels and although they have a variety of restaurants to fit the taste of any visitor, the Benjarong is a Royal Thai Cuisine restaurant that is nearly as good as Bussaracum. It's quite a bit fancier (great for a date or an anniversary or something like that), maybe a bit less a stickler for the culinary traditions, but still completely delicious and well worth a visit. The Benjarong is an exception to my rule about avoiding hotel restaurants. That's because it's a great restaurant that happens to be inside a hotel rather than a restaurant a hotel happens to have so it can feed its hungry, undiscerning guests.

Newer and a bit more geared to tourists, but still wonderful and worthwhile, is the Blue Elephant. It's in an old Thai house a few blocks from the Chao Phraya hotels. When I was in Bangkok I sometimes worked out of the Warner Bros office there and it is just next door to the Blue Elephant. The restaurant is more concerned with being a first class international restaurant than with the specific and traditional intricacies of any schools of cooking. That said, it definitely gets it right anyway. It's perfect for someone a little nervous about going "too native" too fast but who still wants a taste of what's best in nouvelle Thai cuisine. They definitely take liberties with the traditions but everything they come up with is fantastic and unique in a fusiony kind of way.

I always stay in one of the hotels on the Chao Phraya River but the Sukhumvit area is another part of Bangkok very popular with tourists and it's the part of town most Western expats live in. The best restaurant I found in the sprawling area-- and a contender for best haute cuisine in Thailand-- is Baan Khanitha, a restaurant as sumptuous and traditional in its decor as in its delicious dishes. The food is very traditional and tends to highlight some of the best regional Thai traditions as well as the Royal Thai Cuisine. Some say the chef has made too many concessions to the palates of tourists but I'm usually sensitive to that and I found the food excellent.

One place I just discovered for the first time on my last visit is a simple-looking contemporary restaurant called Patara, not far from the Blue Elephant. (I stumbled on it when the Blue Elephant was too busy and I had neglected to make a reservation.) I think its an offshoot of the great Thai restaurant of the same name in London-- except this one is a lot less expensive. In fact, of all the fine-dining experiences in Bangkok, I think this one is the least costly. The service was particularly friendly and less reserved than in most of the always great service you receive in good Thai restaurants. They tend to serve food that is inventive and unique-- but always delicious. Its obvious that there is a mind behind everything that is sent out from the kitchen, a mind that is eager to please and even astound. I found myself going back again and again.

Another restaurant I discovered by accident-- a block from Bussacarcum-- is a very traditional Thanying, also worth a visit, even if the cuisine is less exciting and less innovative than some of the others I mentioned above.

Good Thai food is always fresh and healthy. The cuisine is very vegetarian-friendly and if your eating preferences run towards seafood and vegetables, you'll be very happy anywhere in Bangkok. There are a number of really good specifically healthy-food restaurants these days, restaurants that use organic food and that cater to health-conscious clients. My fave is Amaranth, in the Sukhumvit area. You can take people there and not mention it's health-oriented and they'll just think they're having a delicious meal. I haven't tried it but I hear the same is true of Anotai. Here's a list of a few dozen veggie and health-type places in Bangkok. But if you want to keep it to "fine dining," you'll never go wrong at Amaranth.

A friend told me about a new raw-- like in living-- food restaurant in Bangkok: Rasayana Café. I can't wait to try it. But not this year. This year I'm going to Mali and I have a lot of trepidation's about the... cuisine.
Posted by DownWithTyranny at 2:22 PM

hi,
came across this website called http://the-good-food-guide.com. A great place to host information on various restaurants you've visited. If you find this site interesting tell your friends...

I also recommend another website called restaurantsofbangkok.com that you might found many offers from many exclusive restaurants around Bangkok