USE PARSIMONY IN PACKING BECAUSE THE AIRLINES LOVE TO LOSE YOUR BAGS. DELTA AIRLINES: "LOST LUGGAGE IS US" 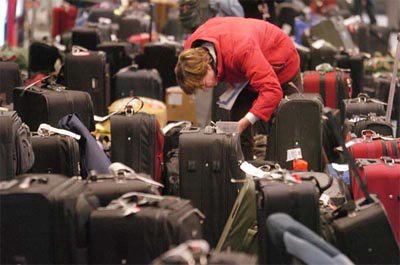 When Nixon was being impeached I decided to end my self-imposed exile and return to my native country, the U.S. of A. (Also I was worried because, after 4 years in Amsterdam, I had started dreaming in Dutch and that felt a little uncomfortable). Anyway, I had been away from home for nearly 7 years. I flew home with 2 bags. I never fly with more. You know why? That's all the airlines allow you to carry on. And I ain't checking nothing with those luggage-losing losers.

It's true that I have a natural disaffinity for waiting around for luggage to be unloaded. On the other hand, there's something kind of sexy to sit down on the plane with no bags to worry about. That's so trumped though by the odds that the airline will lose your bags and put you through the misery incumbent with that nightmare. What are the odds?

Well, they're worst if you fly Delta. Of the 81 million unfortunate souls who found themselves flying on the absolute most horrible of all the big U.S. airlines, over half a million Delta passengers had their luggage go missing. In fact the U.S. airlines lose 10,000 pieces of luggage PER DAY! (Suprisingly, it's even worse in Europe.) This problem has been getting worse and in 2005 over 3.5 million passengers of all the domestic airlines reported missing bags-- a 20% increase over 2004. Many of the lost bags eventually find their way back to their owners, though not before spoiling a trip and often damaged.

I'm not the only person who has noticed this and now, more than ever before, overhead bins are over-stuffed and late-arriving passengers are often t a loss about what to do with their carry-ons. A few weeks ago I was flying back to L.A. from Atlanta and the attendant-- in first class where there was once a time when they were trained better-- seemed to take great delight in the predicament of the passenger across the aisle from me who couldn't fit his bag in the overhead. "You have to check it," she smirked with a self-satisfied, rotten look. I could see he really didn't want to and I offered to help. I thought the attendant was going to have us both arrested as potential terrorists and I would swear that smoke came out of her ears when I showed him that if he turned the bag around the bumpy part with the hardware would face the roomier back end of the compartment and the door would close. I mean, this is what she should have told him. Instead she just stomped off in a huff to wherever they turn Delta attendants into such miserable wretches.

People handle the fear of losing luggage in different ways. I have started taking less. I've long found myself over-packing anyway. I mean how many times do I have to travel to third world countries before I learn that I don't really need a suit and tie? I remember once badgering poor Roland to be sure to bring his Hugo Boss sports jacket on a trip to Egypt. He just acquiesced to shut me up. Turned out some fundamentalist psychopaths slaughtered a busload of Austrian tourists at Luxor and Egypt instantly emptied of Western visitors. Except me and Roland. We had one f those fantastic Nile river boats that normally hold a couple hundred people to ourselves (+ a couple of old Brits on the way back to London after a lifetime of service in Oman). Roland never wore his sports jacket once but it came in very handy for him on a bus ride across the Sinai one night when he used it as a pillow against the filthy greasy window of the bus. I think I'm finally starting to carry less clothes, although I now bring along so many nutritional supplements that it almost balances out. (I've even come up with ways to lessen that load a bit lately.)
Posted by DownWithTyranny at 3:49 PM

I allways tougth Lufthansa is the worst company to fly with. I've seen many fligth attendance there with a bad attitude and try to avoid this airline if i can.
Have fun...