Urban Gadabout: Is Jane's Walk Weekend coming up where you are? Plus some additional NYC-centric gadding notes 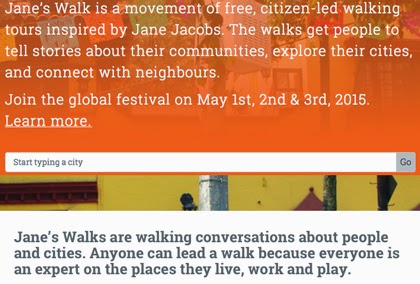 No, you can't click on anything here, or type anything in. But you can by going to janeswalk.org. 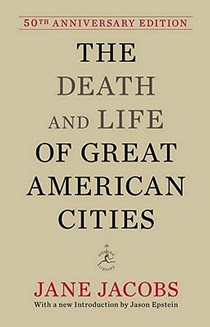 Just some quick updating, mostly occasioned by the upcomingness of a favorite weekend of the year in this space, Jane's Walk Weekend. For us in New York it means, once again, a generous calendar of incredible walks (and also some bicycle rides) -- free events -- overseen by the Municipal Art Society, which knows a thing or two about walking tours, except that this year the calendar includes a pretty full schedule on Friday as well as Saturday and Sunday, May 1-3.

New Yorkers can go directly to the New York City page. In theory there are filters that should enable you to sort the total schedule to fit your particular needs and wishes. I guess it's my contrariness that make those filters really not terribly helpful for my purposes, making it necessary to scan repeatedly through the whole schedule. But then, wouldn't I have wanted to peruse the whole schedule anyway? (New Yorkers may also check out the recent MAS blogpost, "Jane's Walk Weekend Is Back -- and Bigger than Ever.")

I know we're getting close to the actual dates. All the more reason to find the appropriate Web page for your locality and see what whets your exploring appetite. It's a great tribute to that great urbanist Jane Jacobs, one of the foremost champions of cities and one of the most revealing students of the way cities work, or don't.

One other Urban Gadding note I can pass on is that urban geographer Jack Eichenbaum, the Queens borough historian, has scheduled a new edition of what he calls his "signature" tour, The World of the #7 Train, an all-day extravaganza that consists of six mini-walking tours along with an exploration of the #7 train from Manhattan to its terminus in Flushing, Queens. Here's how Jack describes the outing on the "Public Tours" page of his website:

This series of six walks and connecting rides along North Queens’ transportation corridor is my signature tour. We focus on what the #7 train has done to and for surrounding neighborhoods since it began service in 1914. Walks take place in Long Island City, Sunnyside, Flushing, Corona, Woodside and Jackson Heights and lunch is in Flushing’s Asiatown. Tour fee is $42 and you need to preregister by check to Jack Eichenbaum, 36-20 Bowne St. #6C, Flushing, NY 11354 (include name, phone and email address) The full day’s program and other info is available by email: jaconet@aol.com The tour is limited to 25 people.

As it happens, I've just done a couple of MAS tours with Jack: a couple of weeks ago a fascinating walk along Woodside Avenue in Queens, and just yesterday the East Side version of his Manhattan "Conforming to the Grid" tour, which focuses on the disruptions to the Manhattan grid created in the Commissioners' Plan of 1811 caused by pre-existing development of the area north of present-day Houston Street between Broadway and the Bowerie. Jack will be doing Part 2, the West Side version, looking at the grid disruptions caused by the pre-existing settlement of then-"suburban" Greenwich Village along the Hudson River, is coming up Sunday, May 31, at 11am. The day before, Saturday, May 30, Jack will be doing Part 2 of his MAS series "What's New (and Old) in Long Island City.

For more information on both, and to check out the rest of the current MAS schedule, go to mas.org and click on "Tours" -- or this link will take you directly to the "Tours" page. Right now MAS is coming up on the final month of the current March-May MAS schedule. Watch for the announcement of the next schedule -- which one might guess will cover June-August -- sometime in mid-May. It's worth checking for the new schedule in a timely fashion, because for some time after it's announced, it's possible to register for any darned tour you want, including the ones that are "never available." Well, they're not available if you wait till they're filled!

Registration has already begun for non-members as well as members for the Transit Museum's busy summer schedule. For more information go to the "Programs" page of the Transit Museum website, and click through to the link for any date that looks interesting to you to see what the current availability is.

I was going to recommend the two additional outings of a tour that Mike Morgenthal offered for the first time in the last schedule, "Ghosts of the Elevated: A Walking Tour," a walk through the Lower Manhattan risings of the old Second and Third Avenue els, which I enjoyed enormously. But I see that both dates are sold out! On the plus side, this suggests that the tour will continue to be offered!

One thing you know will be available is the Transit Museum's 2015 schedule of ever-popular "Nostalgia Rides," which happen on tenderly cared-for vintage equipment from New York City Transit's collection. Two outings are scheduled for summer: "Beach Bound: Coney Island," on Saturday, July 18, and "Orchard Beach by Rail and Bus," on Saturday, August 8. I can recommend both from personal experience, and may do the Orchard Beach outing again, hoping for better weather than we had the last time we set out there. In addition, we have advance news of another outing I can recommend from personal experience, a fall "Evening Ride to Woodlawn Cemetery," on Saturday, October 24.

I'm doing all of the above except the Tottenville excursion, and that's only because of a schedule conflict. The first tour I ever did with Justin was a version of the all-day Tottenville outing he did for MAS some years ago, in admittedly dreadful weather -- looking out over the Arthur Kill, which separates southern Staten Island from New Jersey, we could barely make out the city of Perth Amboy opposite. What's more, we weren't able to go inside Conference House itself, which has now been refurbished and just been reopened to the public.

But my abiding memory of the Tottenville trip is that as soon as Justin got our group safely organized on the Staten Island Ferry he started talking, and about eight hours later, on the return trip, he took a breath. My official policy became that if Justin thinks there's something worth seeing someplace, I'm going, as long as I don't have a schedule conflict. In the case of the above-mentioned "Summer Mansions of Astoria" tour, I'm going even though I had a schedule conflict. As I've mentioned I've been reading Edith Wharton, including the Old New York quartet of novellas, and I'm not going to miss that!

Download the Spring 2015 Wolfe Walkers brochure for more information, including the registration form.