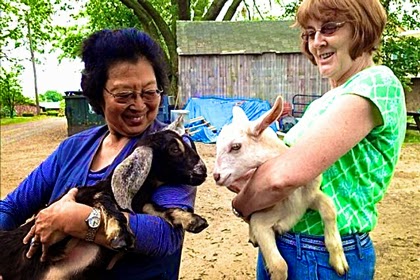 You have till June 11 to tweet your suggestions for names for the four-week-old female goats who will be in residence this summer on Governors Island.

"The goats are a great way to bring attention to the importance of composting. Food scraps are a resource, not garbage."

We'll get back to the baby goats, but let's take a moment to note the progress of Governors Island, the small (but much less small thanks to lots of landfill) island off the southern tip of Manhattan Island, across Buttermilk Channel from Brooklyn. Since the island -- once home to various government entities, including most recently the U.S. Coast Guard -- was opened to the public for summer weekends, each summer has brought a major increase over the previous one in facilities and activities.

Decisions remain to be made about actual development in the northern half of the island, the part that has traditionally hosted the headquarters of whoever was using the island, which includes a large number of buildings that are already landmarked or otherwise targeted for retention and repurposing. But the range and quantity of exhibitions and activities, which has been increasing significantly each year, has seen one of its largest-ever increases. And this year marks the opening of a good deal more of the park -- some 30 new acres -- that's being constructed in the southern (i.e, landfill) half of the island. The park's rolling hills have started to take shape, with some serious elevations, in recognition of the island's flood-prone position, sitting barely above sea level in the heart of New York Harbor.


The new 30 acres of park include Liggett Terrace, a sunny, six-acre plaza with seasonal plantings, seating, water features and public art; Hammock Grove, a sunny ten-acre space that is home to 1,500 new trees, play areas and 50 hammocks; and the Play Lawn, 14 acres for play and relaxation that includes two natural turf ball fields sized for adult softball and Little League baseball. In addition, new welcome areas have been added at the Island’s ferry landings, as have key visitor amenities, including lighting, seating and signage throughout the Historic District. 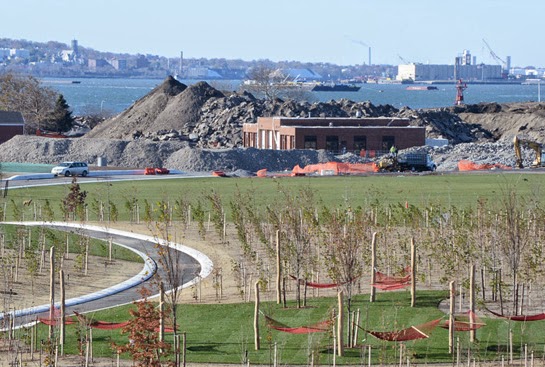 Trust for Governors Island caption for this construction photo: "Detail of Hammock Grove, with The Hills rising in the distance. Over 1,500 trees have been planted in the first 30 acres of new park." (Yes, there are actual hammocks for visitors to use.)

Probably the biggest development this year is that for the first time Governors Island is open to visitors seven days a week, with additional ferry service in place. In addition to the ferries that have been running for years on weekends from both Manhattan's Battery Maritime Building (a bit to the east of the Staten Island Ferry Terminal) and the Brooklyn ferry slip at the Atlantic Avenue end of Brooklyn Bridge Park, regular Monday-Friday ferry service will be available from Manhattan. For the first time there will be a charge for the ferries -- a whopping $2 round trip (no extra charge for bikes), with kids under 12 riding free (and everybody riding free in the morning) and seniors riding half-price. There's also a new program in place for making free bicycles available to visitors on a limited basis. (Bikes have long been available for rental, and many visitors bring their own.) Given the spectacular views of the harbor, it's a great place to bicycle.

NOW ABOUT THE GOATS

They're a pair of four-week-old female goats, a dark brown Nubian and a white Alpine-Saanen mix, on loan from Long Island's Goodale Farms, which last year supplied two goats who were named Patches and Cream. The Trust for Governors Island is inviting tweeters to suggest names for the new goats, who will be in residence at the island's Earth Matter Composting Learning Center this season, where they will be dining on visitors' food leavings.

"Tweet name ideas to @Gov_Island by June 11," Irene Plagiano writes in her DNAinfo New York report, "and a winner will be chosen by the end of that day, the Trust said."


So far, suggestions for the 4-week-old goats — a dark brown Nubian and a white Alpine-Saanen mix — include Ebony and Ivory, from @TheGitch, as well as Sansa and Arya, a pair of sisters from the show “Game of Thrones,” and Hop and Scotch. . . .

This is the third year the center is housing goats, which like to chow down stray branches, leaves and weeds — which helps the Trust maintain the grounds — along with leftover food.

The young goats are still being fed with milk bottles, but they have already starting chomping on food scraps and greenery as well, DeDominicis said.

Visitors to the center, which is located just off the newly opened Play Lawn, can pet and help feed the goats every Saturday and Sunday from noon to 4 p.m.

“The goats are a great way to bring attention to the importance of composting,” said DeDominicis. “Food scraps are a resource, not garbage.”

DeDominicis said there are 15 brown cans throughout the island labeled for composting, which are collected for the goats.

After the season, the yet-unnamed goats will head back to the farm, where they’ll be used as dairy goats, for education about farming — and for visitors to pet. 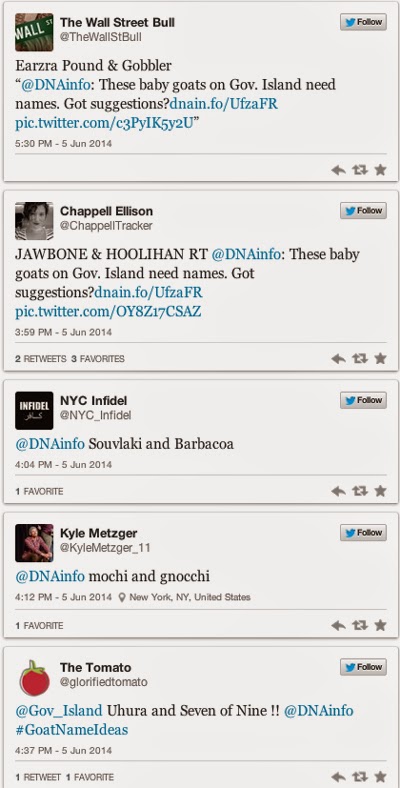